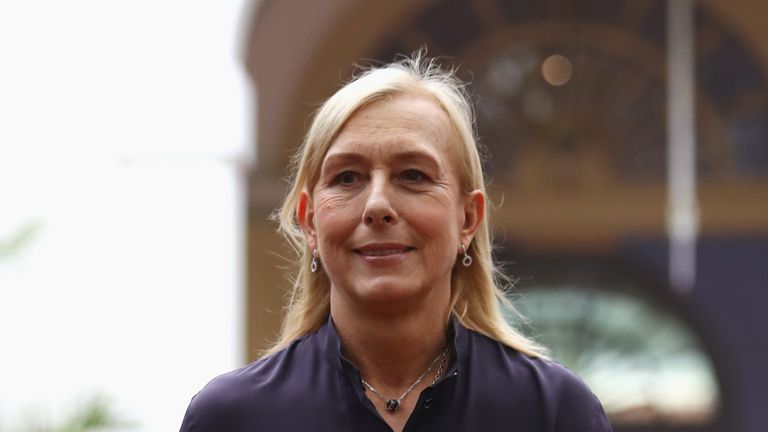 Racing driver Charlie Martin, who is transgender, told Sportswomen that Martina Navratilova's comments on trans inclusion in sport are misleading and offensive

Martina Navratilova has been dropped by Athlete Ally, an organisation that supports LGBT+ athletes, following her comments on transgender inclusion.

In a newspaper opinion column at the weekend, the 18-time Grand Slam tennis singles champion referred to trans women as men who "decide to be female", and said allowing them to compete with women who were assigned female at birth is "cheating and unfair".

Athlete Ally, a US non-profit founded in 2011 that campaigns for greater LGBT+ inclusion in sport, say her comments are "transphobic" and have removed the 62-year-old from their advisory board and as an ambassador.

In a statement, the organisation said: "Athlete Ally unequivocally stands on the side of trans athletes and their right to access and compete in sport free from discrimination.

"Martina Navratilova's recent comments on trans athletes are transphobic, based on a false understanding of science and data, and perpetuate dangerous myths that lead to the ongoing targeting of trans people through discriminatory laws, hateful stereotypes and disproportionate violence.

"As an organisation dedicated to addressing root causes of homophobia and transphobia in and through sport, we will only affiliate with those committed to the same goal, and not those who further misinformation or discrimination in any way."

Navratilova first drew criticism in December when she tweeted "you can't just proclaim yourself a female and be able to compete against women".

She returned to the topic in her recent article for the Sunday Times, saying that her views have "strengthened" after doing some research.

Navratilova wrote: "To put the argument at its most basic: a man can decide to be female, take hormones if required by whatever sporting organisation is concerned, win everything in sight and perhaps earn a small fortune, and then reverse his decision and go back to making babies if he so desires.

"It's insane and it's cheating. I am happy to address a transgender woman in whatever form she prefers, but I would not be happy to compete against her. It would not be fair."

Athlete Ally claims it approached Navratilova after she posted her tweet in December regarding athletes who are trans and are participating in competitive sport, in order to discuss her views further.

"We reached out directly offering to be a resource as she sought further education, and we never heard back," the statement continued.

"We believe that growth is possible, and we extend once again to Martina the invitation to learn from this experience, to study the data on trans athletes in sport, and to examine how statements like hers further stigma and discrimination."