"I was fearing my body shutting down," Grigor Dimitrov opens up in an exclusive interview about contracting coronavirus during the Adria Tour. He is now having to deal with the symptoms and will never know if the virus will effect him long-term.

Speaking from his home in Monte Carlo, Dimitrov has been enjoying the warm-summer Mediterranean nights for the past couple of months.

A reflective, thoughtful Dimitrov sat enjoying his Sunday morning cup of coffee on his balcony ready to talk about the Adria Tour debacle in June which was cancelled after he had tested positive for coronavirus.

Numerous players, including world No 1 Novak Djokovic has tested positive but it was the Bulgarian who bore the brunt of the criticism.

He has since returned to the court, competing at the Ultimate Tennis Showdown (UTS) in France, but the former world No 3 admits he is unsure what long-term damage the virus do to his body. It's a nightmare scenario for any professional sportsperson.

"This thing is real," said Dimitrov. "The virus and how everything is handled. The toughest part is that we just don't know. For everyone, not only for athletes. The uncertainly is what gets you the most.

"I was active all my life and then suddenly I was forced to be shut down, just physically, so it's like you're taking my wings away but somehow I found a way to try and understand what is going on and the more I thought about it things are happening at a basic rate so if we are careful, we do the right things, things will be alright we have to absolutely respect the process of what is going on." I really didn't feel well. I had very different symptoms with not being able to taste any food that I was eating and my smell was gone.

Dimitrov spent three weeks in isolation during which time he lost up to to seven pounds, but it was the mental isolation which he found the hardest part.

"I don't mind being on my own, and I think I've managed pretty well over the years. I've pretty much lived on my own since I was 12-year-old," he said. "That doesn't scare me. It was the uncertainty of having to deal with health issues.

"I really didn't feel well. I had very different symptoms with not being able to taste any food that I was eating and my smell was gone. I'm not even 100 per cent back to myself in those departments but at least I'm trying to get there every day. I was just not active I was fearing my body shutting down, which is the biggest fear for any athlete. You always try to stay in shape, you eat well, you sleep well, you have a good discipline about things, but you come out of the other end and it's like so much had changed.

"On a positive note I've done a lot of heart tests and blood tests which all seemed to checkout fine. You just kind of got to be patient with it and hopefully in a month or so I'll be back at full force to do everything and there won't be any further repercussions after."

With face masks and social distancing now part of our daily lives, Dimitrov strongly believes this is going to be the new "normal".

"I think the more we get accustomed to things I think the better it will be," he said. "As human beings we're so used to our fast lives, flights, holidays, and family. And then all of a sudden, we realise that life is not all about that. For me, what happened to me, it gave me time to think about who the core people are around me, the people that really care about me, and also the people that were not supposed to be around me.

"This is where the virtue of patience comes in a little bit and I think those people need to start thinking about their mental state. I think this is very important and it's not something to be underestimated. It doesn't matter how old you are, what background you have, how much money you have. I'd like to say it was kind of a positive experience for me." 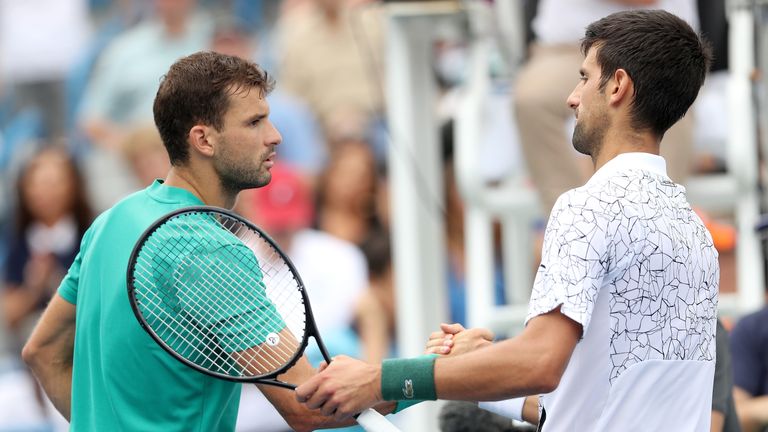 The timing is not comfortable for anyone, but from what I've heard everything is good.

The Bulgarian says he has spoken to Djokovic since the Adria Tour and feels the players involved are now "on the mend" following their experiences.

"I spoke to Novak a while back now," he said. "We're in the same boat right now but we're almost back to 100 per cent. The timing is not comfortable for anyone, but from what I've heard everything is good. We're all back on the court. We're trying to practice as much as possible and now we're waiting to sort of hear what the next step is going to be for us."