Benoit Paire's anger at being strictly confined at the US Open after testing positive for coronavirus, boiled over at the Italian Open during a heated first-round match on Monday.

The 24th-ranked Paire threw his racket high into the air twice during one game and showed little effort against Italian teenager Jannik Sinner in a 6-2 6-1 loss.

Paire was forced to stay in isolation in New York until he tested negative, which duly prevented him from training. The Frenchman then took to social media to criticise the tournament organisers in Rome, for making him play on the opening day of the tournament.

"I made only one request, which is to play Tuesday to have an extra day of training after what happened to me in New York, and because I'm playing an Italian you put me on Monday," Paire tweeted on Sunday.

Twice during the second set, Paire launched his racket high into the air in frustration and he had numerous verbal exchanges with the chair umpire.

During the final game of the match, Paire slammed returns of serve into the net in anger and seemed to have no intention of putting the ball into play.

When he finally managed to get a return into play on Sinner's first match point, Paire seemed surprised and did not bother to run down the reply.

Naomi Osaka: Leading the way on and off court

This is a story about more than just tennis, with Naomi Osaka using her platform to promote Black Lives Matter and honour victims of violence and brutality.

"I had not played in 10 days, staying in my room," Paire said after the match.

"The result does not really matter," Paire added. "I still have the doubles. I will try to entertain myself with Nico [Nicolas Mahut] and try to win a match."

The tournament at the Foro Italico has been rescheduled from its usual May slot due to the pandemic and is being played behind closed doors.

"On one hand I can understand, after spending so many days under quarantine in New York," Sinner said. "In the end, I did what I needed to."

Elsewhere in the draw, Kei Nishikori, who is returning from right elbow surgery and missed the US Open after testing positive for Covid-19, won for the first time in over a year.

He beat Albert Ramos-Vinolas 6-4 7-6 (7-3) and moves on to face either Stan Wawrinka or Lorenzo Musetti in the next round. 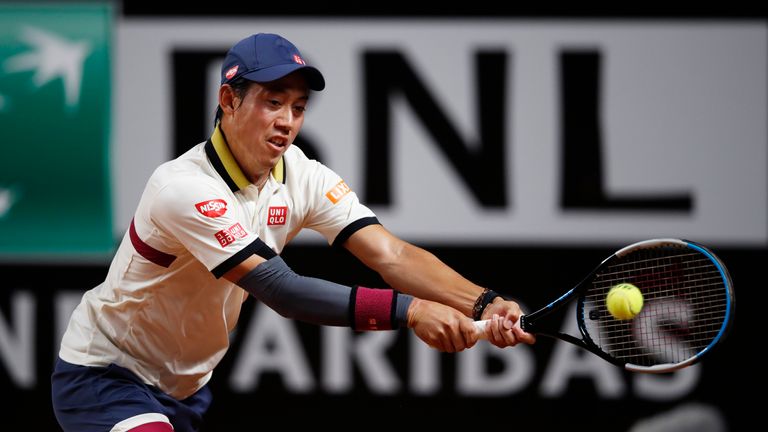 I'm still not feeling 100% tennis-wise but I enjoyed. Now it's important to have as many matches as I can, keep winning. I need to start getting into a good tempo, good rhythm.

Filip Krajinovic surprised the draw with a 6-4 7-5 victory over the US Open quarter-finalist Felix Auger-Aliassime. The Serb lost just three points on his first serve and meets the winner of Tuesday's encounter between qualifier Marco Cecchinato and Britain's Kyle Edmund.

Also on Tuesday, Dan Evans is partnering Grigor Dimitrov in the men's doubles and they will face Maximo Gonzalez and Diego Schwartzman.

Not to be for Jamie Murray & Neal Skupski at @InteBNLdItalia

The British duo lost out to Peers & Venus 6-3, 7-5 in Rome#BackTheBrits 🇬🇧 pic.twitter.com/XEDhgaMJFq

Joe Salisbury and Rajeev Ram, who are the second seeds, will take to court against Italian wild cards Lorenzo Sonego and Andrea Vavassori. Jamie Murray and Neil Skupski were beaten in the first round 6-3 7-5 by John Peers and Michael Venus.

In the women's draw, the 11th seed Elise Mertens moved into the second round with a straightforward 6-3 6-1 victory over Hsieh Su-wei, while 21-year-old Elena Rybakina beat Ekaterina Alexandrova 6-0 6-4 in just 61 minutes.

Ukraine's Dayana Yastremska overcame home favourite Camila Giorgi 7-5 6-7(5) 6-4. Both players struggled on serve and in total, 28 double faults were recorded during the contest.