French Open 2021: Ashleigh Barty withdraws in second round due to injury

The Australian, who won the title in 2019, decided to call time on her second-round match in the early stages of the second set as a result of an injury to her left hip; "It won't take away the brilliant three months that we have had, as much as it hurts right now."

World No 1 Ashleigh Barty has withdrawn from the French Open due to injury.

The 2019 champion was forced to retire due to an issue with her left hip, when she was 6-1 2-2 down against Magda Linette in the second round.

Barty, who had been pushed to three sets by the world No 70 Bernarda Pera in the first round, had made it clear she was entering the contest not being 100 per cent fit.

The Australian said she would "give it a crack no matter what", however, the treatment she received at the end of the first set clearly did not alleviate her discomfort.

With the Wimbledon Championships starting in 25 days, attention will quickly turn to whether or not Barty will be fit to take part and compete on the grass.

It's a Grand Slam that she has not won, with her best result - reaching the round of 16 - coming in 2019 off the back of her Roland Garros title.

Linette will face the 25th seed Ons Jabeur in the third round.

Uncomfortable from the start

Throughout the 48-minute match, Barty looked uncomfortable on Court Philippe-Chatrier.

The world No 1 held onto her first service game but after that, Linette took control of proceedings.

Although the Australian showed her fighting spirit, 14 unforced errors and a first-serve percentage of just 39 per cent highlighted she was grappling with her injury.

Between sets, Barty then had off-court treatment during a medical timeout, and looked slightly rejuvenated after it.

In the opening games of the second set, she swung through the ball and appeared to be more comfortable. However, once Linette had secured her own serve to level the encounter at 2-2, the world No 1 shook her head and called time on the match. 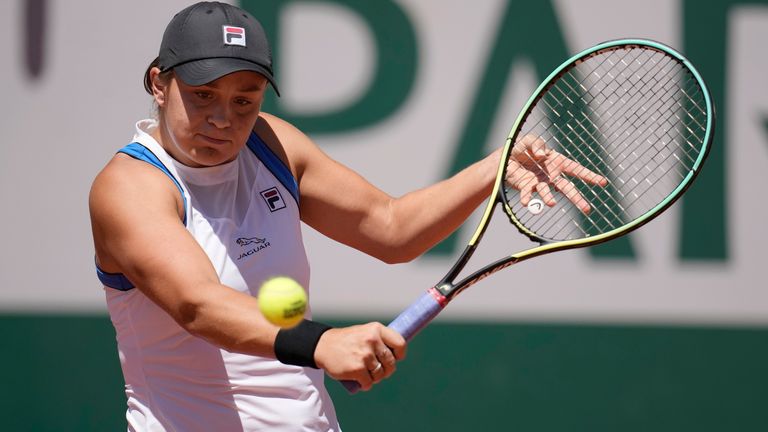 We've been consulting with people all over the world to try and give us some insight into what the best ways to manage it are, and I'm confident we do have a plan. It's just that we ran out of time here. It's disappointing but not panic stations. We know what's going on. We just need time to manage it to get back on the court as quickly as we can.

Barty: Retirement had to be done

Barty was disappointed at not being able to capitalise on a positive spell of work, having won 11 of 13 matches on clay before Roland Garros.

"It's heart-breaking. We have had such a brilliant clay-court season and to get a little bit unlucky with timing more than anything, to have something acute happen over the weekend and just kind of run out of time against the clock, is disappointing," she said during her post-match press conference.

"It won't take away the brilliant three months that we have had, as much as it hurts right now."

The hip injury itself happened during a training session when she landed after a serve, and the world No 1 then explained why she chose to pull the plug on the match when she did.

"I just tried to give myself a chance and see how it felt. Obviously practising we've had our restrictions and essentially tried to stay as fresh as possible and not aggravate it in any way, but in a match that's unavoidable at times.

"It got worse today and it was becoming at the stage where it was unsafe. As hard as it is, it had to be done."