The world No 1 takes on the eighth seed in the 2021 Wimbledon ladies' final and both players will take to Centre Court at 2pm on Saturday; neither has been past the fourth round before at the Championships

Ashleigh Barty is looking forward to the "best experience ever" in the form of her first Wimbledon final on Saturday, when she takes on Karolina Pliskova on Centre Court.

The world No 1, who has won the French Open but had never been past the fourth round at the All England Club before, booked her place in the final with a 6-3 7-6 (7-3) semi-final win over Angelique Kerber.

Her opponent, Pliskova, won the battle of the big-hitters in the second semi-final with a 5-7 6-4 6-4 victory over the second seed Aryna Sabalenka.

"I'm enjoying every single day that we get to come out here and do what I love," Barty said on Centre Court after her semi-final victory.

"Being able to come out and play on the final on Saturday is going to be the best experience ever."

Barty's reference to 'we' wasn't a mistake, it's deliberate and a mark of how important her team are to her.

"You have to [enjoy it], that's the journey and that's the best part of it. All of the opportunities that I get to do, I get to do it with the people that I love and people that have given so much of their time to try and help me be the best that I can be.

"We laugh every day and we smile every day, sometimes through the heartache but through the best moments as well.

"Being able to lighten the mood is the most important thing. It's about coming out here and having fun because playing in front of a crowd like this, on a beautiful court, there's absolutely nothing better."

Ashleigh Barty - Route to the Final

On Saturday against Pliskova, Barty is bidding to become the first No 1 seed to win the Championships since Serena Williams achieved that feat back in 2016.

She also is aiming to become the fourth Junior Wimbledon champion to win the ladies' title, after Ann Jones, Martina Hingis and Amelie Mauresmo. 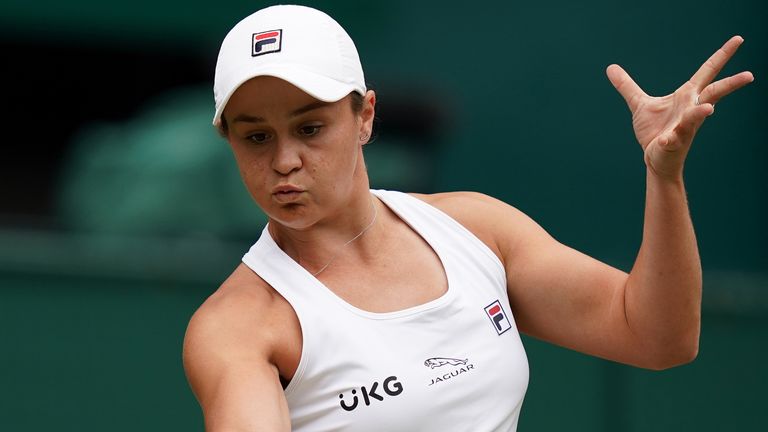 Her confidence level has been really good. She's been playing good tennis. She's been building, it's getting better. We've got one more job to do. Hopefully she comes out and performs as well as she can again.

This year, Barty has been wearing kit that is a tribute to the one worn by Evonne Goolagong Cawley for the first of her victories in 1971.

"Evonne truly embodies what it means to be a trailblazer, and her inspiring career has paved the way for young indigenous women such as myself to see a future for themselves in tennis."

Pliskova, like Barty, hadn't made it past the fourth round at the Championships before and this year her form hasn't been where she would like it to be.

On the Monday that the Championships started, she dropped out of the top 10 after spending 230 weeks there.

"Players or even [former players], they would usually come and say, 'What happened there? Why are you not playing that well?' I think also because of the way I am, I think people think I can handle a lot, which is maybe true. But I don't need to hear all of this," Pliskova, who is a former world No 1, said.

"It's not that I would be playing horrible [tennis]. Sometimes you're just missing a little bit and you're not doing anything wrong. I think sometimes just to hang in there is super important, which I did."

Karolina Pliskova - Route to the Final

Fast-forwards by a little over a week-and-a-half from hearing those critical comments, the 29-year-old came back from a set down in the semi-final against a fiercely-determined Sabalenka.

"After losing the first set, I thought it was going to be super tough to win. Then, to win two sets in a row with the way how she was serving today - I thought that she was serving incredibly - I'm super proud about the way I handled the situation out there.

"I know I had success in the past, I don't forget to play tennis if I lose a couple of times in the first round. I'm proud of us, my team, thank you very much for being so positive." 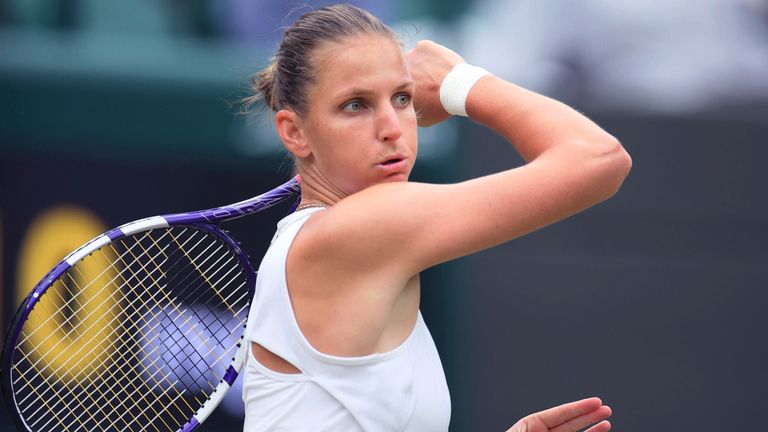 She has big serves and a good slice. She has actually also got good touch. She can drop some balls very low behind the net. She has good volleys. I always thought that her game was very well-suited for this surface. I'm just happy that it's displaying this year with me.

Pliskova progressed into the semi-final without losing a set and is excited for the challenge of meeting the world No 1 and top seed.

The two players have already duelled seven times in their careers; the first was back in 2012 on the grass in Nottingham. On that day a 16-year-old Barty beat her 20-year-old opponent and the Australian has won their three most recent meetings.

Despite that record, Pliskova knows that Saturday's match on Centre Court has a significant leveller - the fact that they both are playing in a Wimbledon final for the first time.

"You want to play the best player in the final. Of course, I don't want anybody else but [Ash Barty] there.

"We had some good matches. I've lost a couple times, but I think she has an extremely difficult game to play. It's going to be difficult on grass because of her slice and just her game overall.

"It's a final. Anything can happen. I know she has a Grand Slam, but also for her it's the first Wimbledon final. I think we both have good chances."