US Open champion Emma Raducanu has pulled out of this month's Kremlin Cup, citing a "tournament schedule change".

The 18-year-old Briton has played only one match since she shot to international stardom with her victory at Flushing Meadows last month, suffering a second-round defeat to Aliaksandra Sasnovich at the BNP Paribas Open at Indian Wells.

Raducanu had been due to be back on court at the Kremlin Cup in Moscow, which takes place between October 18-24.

However, Raducanu announced on Thursday that she is unable to play at the event this year, and instead is looking forward to returning to the WTA Tour in the "next couple of weeks".

"Unfortunately I've had to make a tournament schedule change and won't be able to play Moscow this year, but I hope to compete there and in front of the Russian fans next year," she said in a statement.

"I look forward to returning to the tour in the next couple of weeks."

Speaking after her 6-2 6-4 loss to Belarusian Sasnovich at Indian Wells - which came 27 days after her US Open triumph - Raducanu said she needed to "cut herself some slack" as she comes to terms with her new life as a Grand Slam champion. 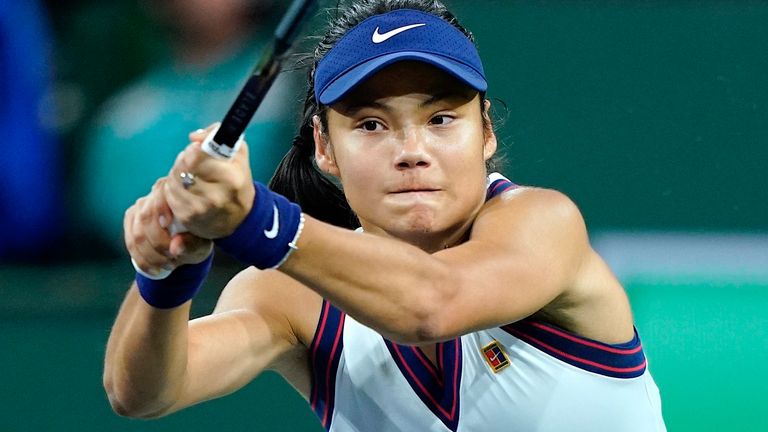 Emma Raducanu does not need to 'press the panic button' following her first-round exit at Indian Wells, according to tennis broadcaster Barry Cowan

She said: "I'm kind of glad that what happened today happened so I can learn and take it as a lesson. So going forward, I'll just have more experienced banked.

"I think it's going to take me time to adjust really to what's going on. I mean, I'm still so new to everything.

After Indian Wells, the world No 22 had entered the Kremlin Cup and the Transylvania Open in her father's home country of Romania the following week.

She is also due to compete at the Upper Austria Ladies in Linz from November 6.