Peng Shuai, 35, has not been seen or heard from publicly since claiming on social media that China's former vice premier had sexually assaulted her; Chinese state media released a letter attributed to Peng, but doubts have been raised over its legitimacy

Serena Williams is among those calling for an investigation into Chinese tennis player Peng Shuai's whereabouts as concerns grow over the player's safety.

Peng, 35, has not been seen or heard from publicly since November 2, when she claimed on social media former Vice Premier, Zhang Gaoli, had sexually assaulted her.

A letter attributed to the Chinese tennis player was released on Wednesday in which she purportedly said the allegations are "not true", adding: "I've just been resting at home and everything is fine."

However, Steve Simon, chairman and CEO of the WTA, said the message "only raises" his concerns about Ms Peng's safety.

On Thursday, 23-time Grand Slam champion Williams became the latest in a growing number of players and organisations expressing concern about the welfare of Peng.

"I am devastated and shocked to hear about the news of my peer, Peng Shuai," Williams wrote on Twitter.

"I hope she is safe and found as soon as possible. This must be investigated and we must not stay silent.

"Sending love to her and her family during this incredibly difficult time."

Simon, who doubts the message attributed to Peng is genuine, has insisted the Chinese tennis player deserves 'to be heard, not censored'.

"I have repeatedly tried to reach her via numerous forms of communications, to no avail," he said in a statement on Wednesday.

"Peng Shuai must be allowed to speak freely, without coercion or intimidation from any source.

"Her allegation of sexual assault must be respected, investigated with full transparency and without censorship." Steve Simon, chairman and chief executive of the WTA, says they are 'fully expecting' China to help prove Peng Shuai is safe after an email allegedly from Ms Peng denied she was missing.

Peng is a former world No 1 doubles player who has won two Grand Slam titles - at Wimbledon in 2013 and the 2014 French Open, both alongside Chinese Taipei's Hsieh Su-wei.

Men's world No 1 Novak Djokovic and Japan's four-time major winner Naomi Osaka, along with Billie Jean King are among a host of current and former players to have expressed support and concern for Peng.

Many have been using #WhereIsPengShuai on Twitter posts, along with a photo of her.

"I hope @WTA continues to show what we stand for as players," world No 18 Jessica Pegula said on Twitter.

"We are extremely lucky to be able to do what we do but I hope more people, not just tennis players, shed some light on this deeply concerning situation."

The UK Shadow Minister for Asia & Pacific, Stephen Kinnock, tweeted: "The Chinese state need to provide evidence that Peng Shuai is alive, well and free. I have submitted a written question to the Foreign Secretary, asking her what representations she has made to the Chinese government about this disturbing case." 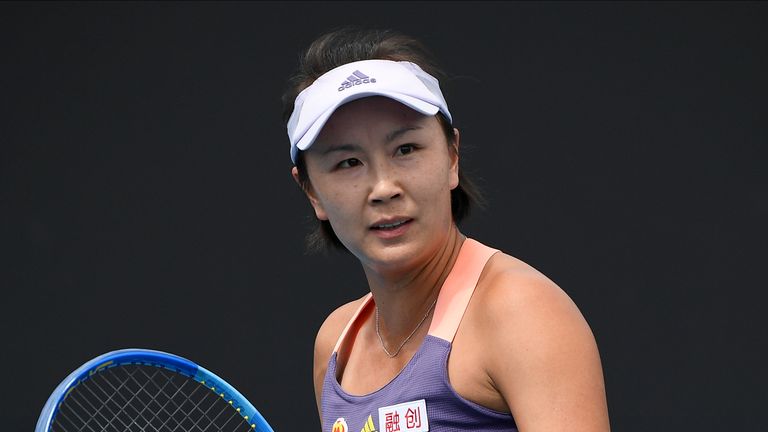 "The reason for this silence, the censorship that is happening, is the claims that Peng Shuai was making reaches right to the top of the Chinese government," Cheshire told Sky Sports News.

"It is the equivalent of the Royal Family really, this is a man who was on the Politburo Standing Committee and that's why it was scrubbed, that's why we haven't heard anything.

"CGTN, which is Chinese state media - the English language version - put out a tweet saying they had seen an email sent by Peng Shuai.

"The WTA has been pretty unflinching here in putting forward its case. The next question will be whether they continue to play matches. They get a lot of revenue from China.

"The other question, of course, is we have the Olympics coming up here in Beijing. Will that be a source of contention if one of its stars has so visibly disappeared?"