The first stop on Serena Williams' farewell tour came to a quick end as she fell to Belinda Bencic in second-round action at the National Bank Open on Wednesday a day after announcing her forthcoming retirement from tennis; Iga Swiatek, Camila Giorgi and Coco Gauff all advanced 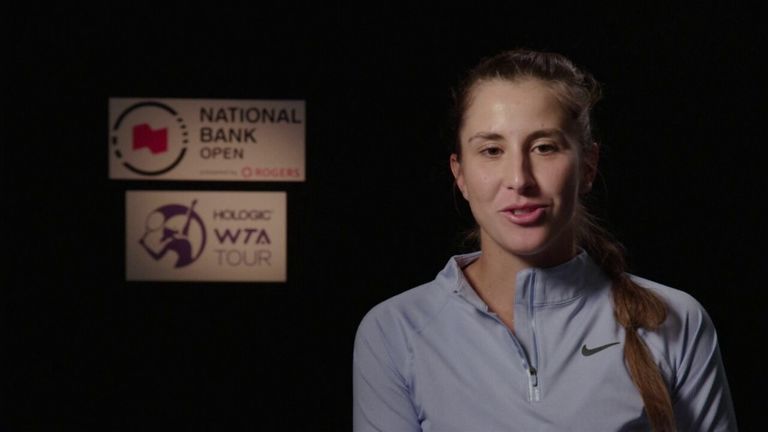 Serena Williams admitted to being "terrible at goodbyes" as the American legend said "goodbye Toronto" after suffering her first defeat since announcing her imminent retirement from tennis.

The 6-2 6-4 second-round loss to Belinda Bencic at the National Bank Open came just a day after the 23-time Grand-Slam champion revealed in a Vogue article she was "evolving away from tennis" and planned to retire from the sport she has dominated for over two decades.

"It was a lot of emotions obviously," Williams told the crowd on Wednesday.

"I love playing here, I've always loved playing here. I wish I could have played better but Belinda played so well today. It's been an interesting 24 hours.

"As I said in the article, I'm terrible at goodbyes. But, goodbye Toronto."

"Anyways, this is what it is," she told the crowd in Toronto as she wiped away a tear.

"I was really happy to be out here today and play in front of you guys, thanks for the support," she said, gesturing toward the fans behind her, who roared back.

"Thank you," she said with a grin as the presentation ended with a gift to her from the Toronto Maple Leafs NHL and the Toronto Raptors NBA franchises.

"As I said in the article, I'm terrible at goodbyes. But, goodbye Toronto"

Bencic, 25, controlled the match from the start with a dominant serve, facing just one break point - which she saved - throughout.

Three-time champion Williams saved two break points in the opening set before going on to be broken twice in the first set.

The American's serve was stronger in the second set, before she double-faulted to give Bencic the break at 3-3 and the Swiss pushed ahead for the win.

It was the Olympic champion's second triumph over Williams at the tournament, following a semi-final victory on the same court when she was a teenager in 2015.

Williams has committed to playing at the Western and Southern Open in Cincinnati next week as well as the US Open later this month, and it appears that will be her final tournament.

Where will Serena play next?

Williams is a two-time champion in Cincinnati (2014 and 2015), where she dropped only two sets in total during her championship runs.

This will be Williams' 10th appearance in Cincinnati.

Williams will then play her second Grand Slam of the season at this year's US Open.

She will attempt to win her seventh US Open title, which would be a record in the Open Era (since 1968).

Up next for Bencic will be Spanish eighth seed Garbine Muguruza, who was a 6-4 6-4 winner over Estonia's Kaia Kanepi.

The 18-year-old French Open finalist cruised through the first set with four aces, breaking Rybakina in the seventh game, and appeared to have the match firmly in hand.

But Rybakina refused to go down without a fight, fending off four match points in the second-set tiebreak before taking it.

A rattled Gauff struggled in the third set, stumbling into seven double faults as the two players exchanged breaks of serve.

The American then dug deep to find her composure, winning five straight points to clinch the third-set tiebreak before pumping her fist and pointing to her brain to cheers from the crowd.