Rafael Nadal reflects on final match with Roger Federer in September and admits: "You know you're not going to live that again and a part of my life left with him (when he retired)."

Rafael Nadal has admitted that a part of his life left with Roger Federer when his great rival retired.

The pair, tennis legends who between them have won 42 Grand Slam singles titles, were left an emotional wreck on court after teaming up for a doubles match for Federer's swansong at the Laver Cup in September.

Following the conclusion of that match, images of both players weeping during the post match ceremony went viral.

"Someone I have admired, who I have rivalled and also I have shared many beautiful things on and off the court was leaving," Nadal told reporters ahead of an exhibition match in Argentina.

Roger Federer and Rafael Nadal revealed their mixed emotions ahead of pairing up for Federer's final professional tennis match.

"In that sense, all those moments, those feelings you have before playing a final of a Grand Slam, of an important tournament, everything that was in the air before those matches. It was different from other matches.

"You know you're not going to live that again and a part of my life left with him (when he retired). It was also the emotion of saying goodbye to someone who has been so important to our sport."

The pair faced each other 40 times over the last two decades in one of sport's most enduring rivalries, with the Spaniard leading the head-to-head 24-16. 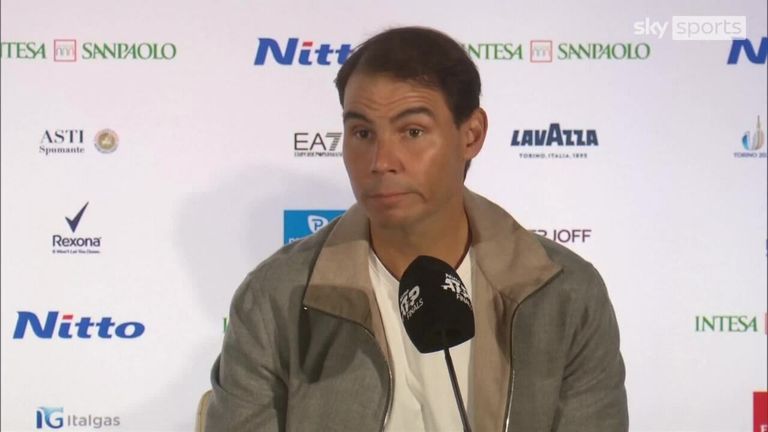 Rafael Nadal shared a glimpse of what his future may hold after admitting he is unsure if he can emulate his friend Roger Federer and play until he is 40.

After suffering a number of injuries and ailments in recent years, Nadal's own future in the sport also remains up in the air even though he won the season's opening two majors.

He followed up his triumph at the Australian Open by capturing a record-extending 14th French Open title in June - even though he required multiple injections to numb the pain in his left foot.

But an abdominal injury forced the 36-year-old Spaniard to withdraw from Wimbledon ahead of his semi-final showdown with Nick Kyrgios.

While he did not elaborate on his own retirement plans, Nadal said: "My time will come when it has to come.

"I'm quite prepared for my next life outside tennis.

"I don't think it's going to be a problem for me beyond what will be an adaptation to the changes. My life has things equally or more important than tennis."

Nadal is on an exhibition tour of South and Central America with Norwegian Casper Ruud.