Novak Djokovic beat Daniil Medvedev in Sunday's Australian Open final. Serb praises the role Roger Federer and Rafael Nadal have had in inspiring him; victory comes at a price as third-round muscle tear in win over Taylor Fritz now means a spell on the sidelines 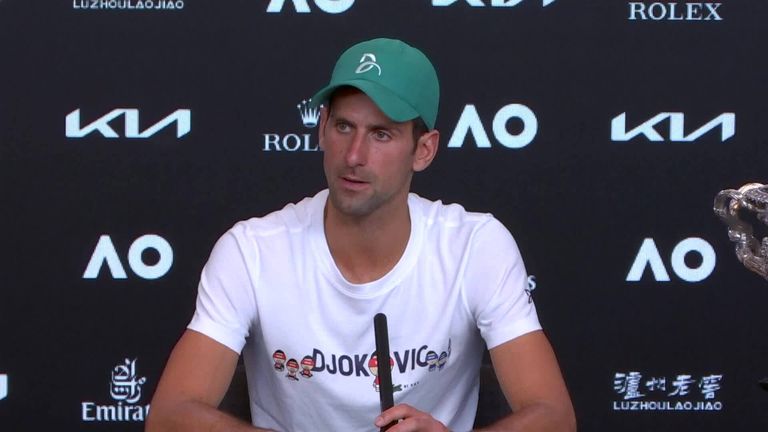 The 33-year-old, who confirmed he had indeed suffered a torn abdominal muscle earlier in the event, produced a hard-court masterclass to end fourth seed Daniil Medvedev's 20-match winning run on Sunday.

Djokovic will claim ownership of the record for most weeks as world No 1 when he spends his 311th week atop of the standings on March 8 - surpassing Federer's run of 310 weeks.

"Now, after achieving the [new record] for the longest weeks at No 1, it's going to be a relief for me because I'm going to focus all my attention on slams mostly," Djokovic said.

"My goals will adapt and will shift a little bit, which means that I will have to adjust also my calendar - not have to, but I will have an opportunity to do that which, as a father and a husband, I'm really looking forward to that."

I don’t know how is it for you #NoleFam but my phone is ringing with messages and calls of congratulations as if it is Christmas! Big day today♥️♥️ 🤣 🥳🥳🥳 celebrations are in order 🏆🏆🏆🏆🏆🏆🏆🏆🏆

Djokovic, who says he is unsure when he will next play, says trying to surpass Serena Williams' haul of 23 Grand Slam singles titles and Margaret Court's all-time record of 24 could yet be another aspiration.

"Everyone has their own journey and their own way of making history," he added. "They've made history already.

"They made a tremendous mark in our sport. I'm trying to build that and develop that myself in a very unique, authentic way that is suitable to me.

"Whether I think about winning more slams and breaking records, of course. Of course, I do. Most of my attention and my energy from this day forward, until I retire from tennis, is going to be directed in majors, trying to win more major trophies."

The three knights of tennis: 'We push each other to the limit'

Djokovic reaffirmed the role both Federer and Nadal have played in his career.

"Roger and Rafa inspire me," said Djokovic, who described the trio as the "three knights" of the sport.

"I think as long as they go, I'll go. I think in a way it's, like, a race who plays tennis more and who wins more. It's a competition between us in all areas.

This race is tight... 👀 #AusOpen pic.twitter.com/yd7e8bkPeN

In his last Grand Slam finals, Djokovic, who along with Nadal has won 10 of the last 11 majors, was defaulted in the fourth round of the US Open after accidentally hitting a lineswoman in the throat with a ball, before he was soundly beaten in the French Open final by the Spaniard.

But Djokovic was ruthless against Medvedev, who had won their previous meeting at the ATP Finals in November, as he broke the big-hitting Russian's serve seven times.

The victory did come at a price though as Djokovic admitted he would have to spend some time on the sidelines recovering from a muscle tear he sustained in the third-round win over Taylor Fritz.

Djokovic confirmed a second scan of his abdomen had revealed he had made the injury worse by playing on.

"I just came from another MRI that I've done this morning and the damage is bigger than what it was when it happened, when I did the first MRI after the third round," Djokovic said.

"It's a muscle tear of the abdominal oblique muscle - it's not too bad judging by what the doctor said but I'll have to take some time off and heal.

"I felt it right away when it happened against Fritz in the third round. That's what I said in the post-match interview. I was kind of guessing, but I felt just that it's a tear because of the snap and the way I felt after that."

He admits the criticism he faced in some sections of the media over the severity of his injury and his recovery hurt him but he had learned to have a "thick skin" as he referenced a documentary due to be released later this year.

"What we have done [to recover physically] in the past nine, 10 days, you'll get a chance to see in details probably end of this year when the documentary comes out," he said.