Wimbledon 2016: Marcus Willis - we take a look at the story of the Wimbledon qualifier

Marcus Willis almost gave up tennis but having beaten Ricardas Berankis on his ATP debut following an incredible qualifying campaign, he is set to meet Roger Federer at Wimbledon.

Willis is ranked behind 22 other Britons in the domestic rankings and his standing of 772 in the world means only fellow qualifier Albano Olivetti (791), who beat British No 10 Ed Corrie in the final round at Roehampton, has a lower ranking than Willis.

It makes the pair the lowest-ranked players to qualify for a Grand Slam since 1998 and for 25-year-old Willis, it is the culmination of a story that almost led to him giving up the sport.

Willis' Wimbledon bid began by qualifying for the qualifiers! And he only got his spot in that event when fellow Brit David Rice fell out of the ranking places.

Willis came through three matches just to reach final qualifying at Roehampton, where he won a further three matches to book a Grand Slam debut and a place alongside Andy Murray, Novak Djokovic and Roger Federer.

All three victories last week came against players ranked more than 500 places above him, and he came from a set down in two of those matches - including the third-round match that guaranteed him a career-best pay-day of £30,000.

His final match came against Russia's Daniil Medvedev and having lost the first set, he rallied to take the next two before an understandable stutter when serving for the match and a place at the All-England Club at 5-2. 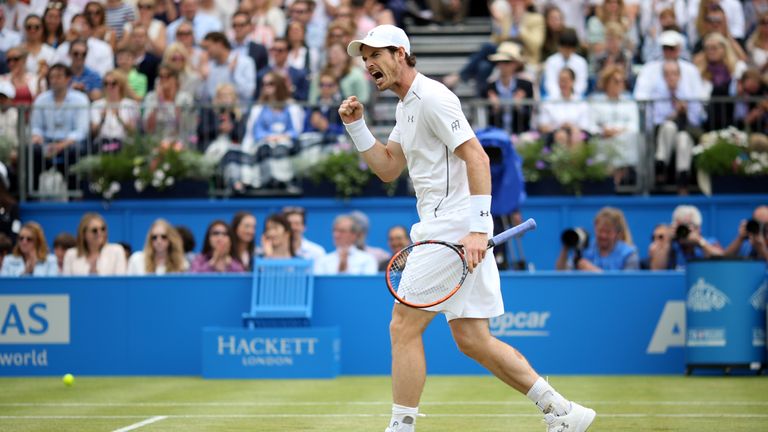 Well done Marcus Willis aka Willbomb on qualifying for Wimbledon! Marcus had pretty much retired from tennis and only played one pro event this year and had been coaching until last week. Awesome feel good story for British Tennis! Well done Willbomb, dreams do come true sometimes.

But he regrouped to serve out the match and take the final set 6-4, sealing a lifetime ambition of a place at Wimbledon that could be the catalyst for a career reborn: "It hasn't sunk in. It has been one of my goals to play at Wimbledon. I could not retire without playing there," he said after qualification.

Willis has his girlfriend to thank for convincing him not just to enter, but to not give up on the sport. Having been coaching at Warwick Boat Club, a coaching career in America beckoned with a job in Philadelphia set to start on June 13, until his qualification bid began to gather pace.

"I sorted my head out. I was in a bad place and really was at a low point. Time helped and I met a girl and since then, it has been very good and my head has been right," Willis added.

"I have been training and playing French League and German League. I was adamant I was going to America to coach but then I met a girl and she told them I was an idiot and I should keep going."

Willis has earned just £258 on this season's circuit, reaching the quarter-finals of a Futures event in Tunisia in January in the only recognised level of tennis he has played.

A couple of low level Futures titles, a world ranking of 221 in 2014 as well as his qualifying run show what Willis could be capable of and he says he will be giving the full Tour another go in January.

His opponent in the first round at Wimbledon was Lithuania's Berankis, who was enjoying his best-ever season having reached a career-high ranking of 50 a couple of weeks ago, to go with a brace of Challenger Tour titles.

Now ranked 53, Berankis has picked up £129,000 in prize money and was a strong favourite to see off Willis but the 25-year-old from Slough caused a huge upset with a spectacular display of tennis to advance 6-3 6-3 6-4 and seal a place in round two, £47,000 and a likely meeting with Roger Federer.

In the year of Leicester City's Premier League title, Willis has already achieved his own level of success. Having overcome Berankis and the biggest rankings difference of the first round (719 places), he now faces the ultimate end (or start) to the fairytale.

His clash with Federer could be staged on Centre Court, if the 18-time Grand Slam champion, seven-time Wimbledon champion and crowd favourite comes through his first-round meeting with Guido Pella.

For Willis, the prospect will surely have made all the struggles worthwhile.