Northern Superchargers tumbled to 19-4 chasing 131 - only for India star Jemimah Rodrigues to play innings of The Hundred so far with 92 from 43 balls as her side beat Welsh Fire with 15 balls to spare; Sarah Taylor impresses in defeat for Fire at Emerald Headingley 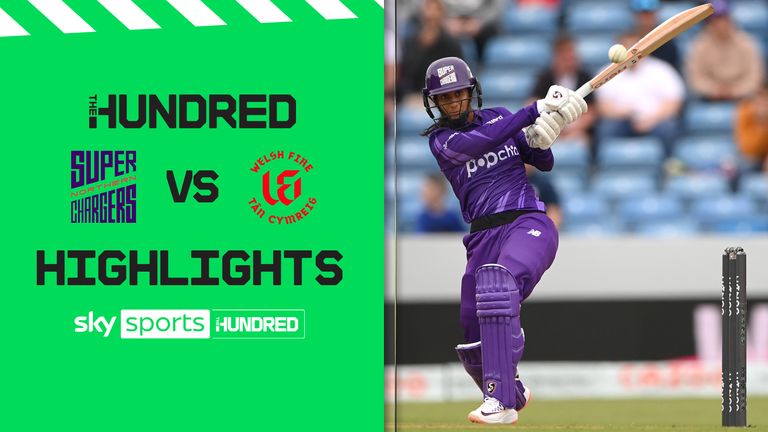 There is a new highest, and finest, individual score in The Hundred, with Jemimah Rodrigues hitting 92 from 43 balls as Northern Superchargers recovered from a horror start to beat Welsh Fire at Emerald Headingley...

Jemimah Rodrigues - simple as that! Yes, Sarah Taylor impressed with bat and gloves in defeat for Welsh Fire and, yes, Northern Superchargers spinner Linsey Smith was outstanding in taking three wickets in 20 balls and conceding only 14 runs. But those watching live, on telly or on their computer screens, will not forget Rodrigues' gorgeous innings in a hurry.

Superchargers were in utter disarray at 19-4 after 18 balls in their chase of 131 but then up stepped Rodrigues to strike with 92 not out from 43 balls with 17 fours and a six - each one of her boundaries beautiful and precise, not one of them hacked or over-hit.

💻 Watch on SS YouTube 👉 https://t.co/ZMEPTRBgBY
📺 Also on SS The Hundred (red button) and Sky One pic.twitter.com/fUxULRN44W

On she went, past Dane Van Niekerk's half-century for Oval Invincibles against Manchester Originals on opening night and then past Zak Crawley's 64 for London Spirit against Birmingham Phoenix on Friday evening as Superchargers beat Fire's 130 from 100 balls by making 131 from 85.

Fire looked liked they might post a really challenging total as they reached 113 from 80 balls in their innings with Taylor at the crease but Smith then dismissed Taylor (18 off 17 balls) and Sophie Luff in the space of four deliveries and Fire managed just 17 runs from their last 20 deliveries.

After taking four early wickets in the chase, Fire had hope - but then came Rodrigues, whose knock was watched, and applauded, by fellow Supercharger Ben Stokes.

With the India star batting, #NorthernSuperchargers are not out of this! 💥

You generally can't be losing four wickets in the powerplay - but with Rodrigues around, that did not matter for Superchargers. With nerves fluttering in the home side's camp, Rodrigues showed none whatsoever.

The diminutive batter hit the eighth ball she faced for a superb six over long-off and Superchargers never looked back, with Alice Davidson-Richards (23no off 28) playing her part in a century partnership.

Not only was Taylor classy at the crease - getting off the mark with a reverse sweep for four and flicking another effortless leg-side boundary - but she was also superb behind the stumps.

She completed the run out of Laura Wolvaardt with the minimum of fuss and then came ever so close to stumping Davidson-Richards.

The 32-year-old retired from England duty in 2019 but recently returned to action in the Rachael Heyhoe Flint Trophy and Charlotte Edwards Cup and could be crucial this summer for Fire.

Taylor's innings was cut short by Superchargers spinner Smith, as the home side's turnaround began. Taylor came down the wicket, missed the ball, and was stumped by fellow wicketkeeper Lauren Winfield-Hill.

Three balls later, Smith and Superchargers made another breakthrough with Luff out lbw after an excellent DRS review from captain Winfield-Hill, while Smith finished the Fire innings by having Alex Griffiths caught in the deep.

Taylor (18 off 17 balls) falls, with Winfield-Hill whipping off the bails after the #WelshFire batter advances down the pitch 💫

An early batting collapse - in which Winfield-Hill was out for nought second ball - threatened to undo Smith's good work but Rodrigues ensured it did not go to waste with an innings that will be hard to beat for its class throughout the remainder of the tournament.

Jemimah Rodrigues: "I feel like England is my second home, and I'm thinking of buying a new house here in Yorkshire! I was with (Yorkshire Diamonds in the Kia Super League) in 2019. It's nice to come back.

"I tried to keep it simple. Whoever stayed the calmest would win. It's never easy when wickets fall and you're chasing. One of them was my mistake (run out of Laura Wolvaardt), so I had to take responsibility. The crowd (5,026) here was phenomenal. Thank you to everyone who came out to support women's cricket."

Welsh Fire's Hayley Matthews: "Losing's never easy. But, at the same time, you have to appreciate how Jemimah batted. She played a really, really good innings, and we couldn't really do much.

"Maybe we could have improved the lines we bowled and a couple of mis-fields. At the same time, you have to give credit to the way she batted. Getting early wickets was important, but at the same time we didn't want to get complacent."

There are another FOUR matches for you to enjoy on Sunday!

Also from 2pm, Manchester Originals and Birmingham Phoenix's women's sides face off at Emirates Old Trafford, live on Sky Sports The Hundred via the red button, as well as on the Sky Sports Cricket YouTube channel and Sky Sports Mix.

Then, from 5.30pm on Sky Sports The Hundred, it is the turn of the men's teams from Manchester Originals and Birmingham Phoenix.