Will Smeed (101 not out) made history in The Hundred and Henry Brooks took five wickets as Birmingham Phoenix thrashed defending champions Southern Brave; watch Oval Invincibles vs Northern Superchargers live on Sky from 2.30pm on Thursday, coverage of the women's Hundred starts at 6pm 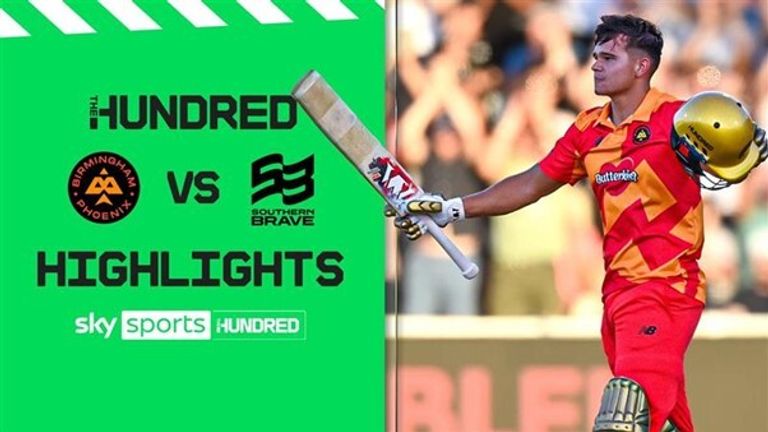 Highlights of The Hundred match between Birmingham Phoenix and Southern Brave

On a history-making night, Will Smeed hit the first century in The Hundred and Henry Brookes took five wickets at Edgbaston as Birmingham Phoenix beat defending champions Southern Brave.

On NHS Heroes Night in Birmingham, with workers and support staff invited along as a thank you for their brilliant work, a 14,000 crowd was royally entertained as Smeed blazed an unbeaten 101 off 50 balls to lift his side to 176-4.

The Brave replied with a paltry 123 all out as Brookes enjoyed a dream debut on the ground he has always called home.

He took 5-25 and two excellent catches as Phoenix banked their first victory of the campaign and handed James Vince's side their first defeat in nine matches.

After Phoenix were put in, they leaned heavily on Smeed after Chris Benjamin, promoted to open, and Moeen Ali each raced to 17 but then perished.

Benjamin sent up a skier off Marcus Stoinis before Ali, having lifted George Garton deep into the crowd at mid-wicket, chopped James Fuller's first ball on to his stumps. 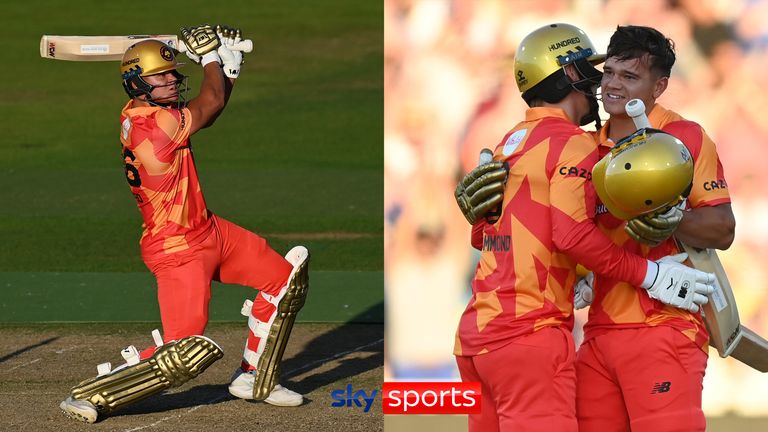 Smeed galloped to a 25-ball half-century, reached with a six over long-off off Jake Lintott in a stand of 80 in 44 balls with Liam Livingstone.

Livingstone never really hit his stride, scoring just two from his first seven balls and 21 from 20 before lifting Lintott to extra cover.

Into the last 10 balls, the big question was will Smeed complete his ton? He needed five from the last three and a four and a two took him to the magical mark from 49 balls.

Phoenix set about defending their total with an increasingly-depleted seam attack, Adam Milne having joined Matt Fisher, Chris Woakes and Olly Stone on the absentee list.

But Kane Richardson soon stepped up, bowling Vince with his first delivery after the Brave captain had smacked Ali for 16 in three balls in the first set.

Richardson conceded just a single from his first five balls and Phoenix struck again when Stoinis was brilliantly caught by Brookes at short fine-leg off Tom Helm. 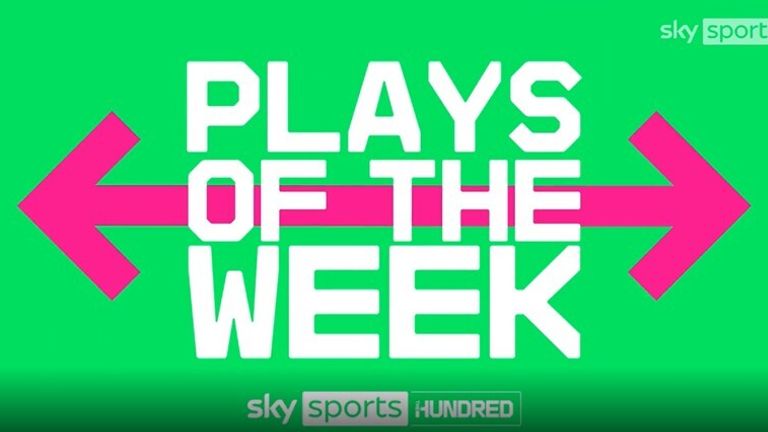 A look at the best shots, catches and wickets from the first week of The Hundred

Brookes followed that up in sensational style by striking with his second, 10th, 13th, 15th and 17th balls.

Quinton de Kock sent back a return catch, Tim David lifted to deep square-leg, Alex Davies was bowled through an attempted scoop for 33 and Fuller and Garton were pinned lbw.

Brookes had not quite finished. At 108-7, Brave's one sliver of remaining hope lay in some pyrotechnics from the big-hitting Ross Whiteley, but when he blasted Benny Howell to long leg, Brookes made no mistake and Richardson then cleaned up the tail. 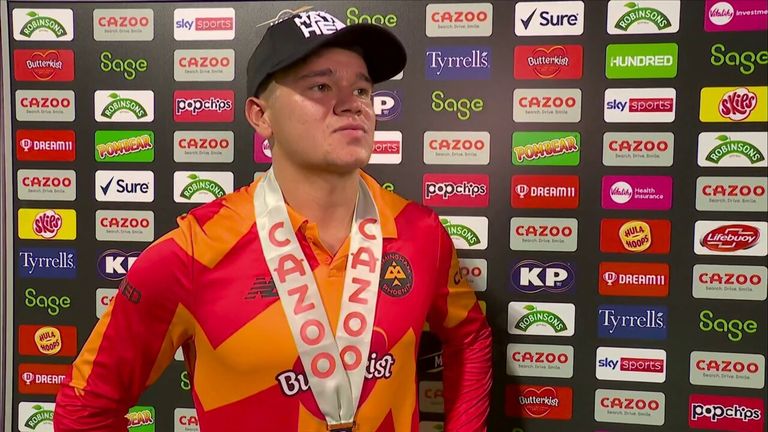 Smeed said: "It was obviously a great feeling coming off to the applause, but to win as well and the atmosphere at the end was amazing so that was the most important thing. Edgbaston is known for the crowd and the atmosphere, and it definitely lived up to its name.

"It's a learning lesson that you don't have to hit every ball out of the middle of the bat and hopefully the more I play, the more I can learn and improve.

"It was nice to get the extra few runs because I've been stuck short a few times! That was a great team performance and a shout out to Brookesy [Henry Brookes] that was epic. There will be confidence in the group again and hopefully we can get on a bit of a roll now."

Birmingham Phoenix's captain Moeen Ali: "The crowd certainly helps, and we've got some good players at a ground like this, who like batting here.

"It's awesome. You want to be performing and winning but if you're bringing through a few youngsters while you're doing that it's great. Will was good for us last year and Brookesy tonight with the ball was fantastic.

"It's great winning and when you've got one or two young players doing really well for you as well, it's great for experienced players to not have the pressure always on them because everyone can do it." 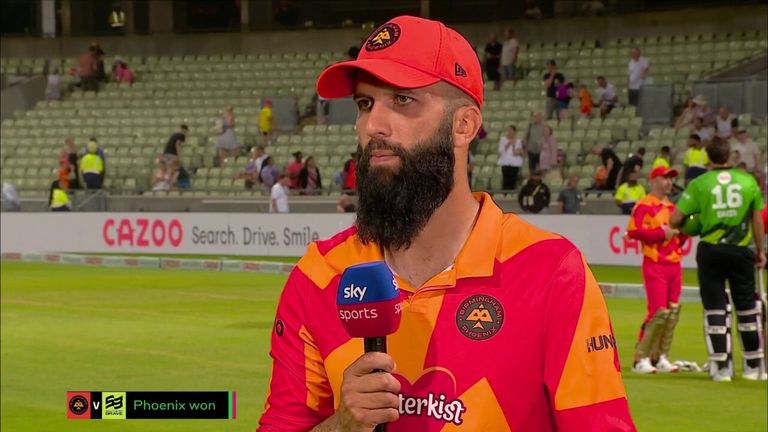 Eoin Morgan: "When you have young players coming in and performing beyond their potential it's a really good sign into the environment that they [Birmingham Phoenix] have created.

"It's a big line in the sand for English cricket. He [Smeed] doesn't play any first-class cricket, he is predominantly a T20 cricketer and clearly exceptional in what he does, so potentially a new avenue for him into international cricket.

"We've seen in other competitions around the world where domestic franchise tournaments, which attract big-name players, create domestic heroes. Tonight, Will Smeed has become one of them.

"Henry Brookes' variation and skill that he showed was brilliant. The pace that he bowled with was exceptional for a guy of his age and he's been a real find for a number of years, but hampered by injury."

Thursday sees the start of the women's competition with the game between Oval Invincibles and Northern Superchargers. Build up on Sky Sports The Hundred, Sky Sports Mix and Sky Sports Main Event begins at 6pm ahead of the first ball at 6.30pm.

The men's fixture will take place before with coverage from 2.30pm and the first ball at 3pm. You can also watch the match via our a free live stream on skysports.com, the Sky Sports App and the Sky Sports Cricket YouTube channel.

Watch every match from The Hundred this summer live on Sky Sports. The women's competition starts on Thursday with defending champions Oval Invincibles taking on Northern Superchargers at The Kia Oval (6.30pm start).