The Hundred: Alice Capsey chips in on injury return as Oval Invincibles edge past Trent Rockets

Trent Rockets' Alana King bowls 10 dot balls in a row in a losing cause as defending Hundred champions Oval Invincibles squeeze past Nat Sciver's team at Trent Bridge; Alice Capsey, Marizanne Kapp and Suzie Bates star as Invincibles reach target of 113 with one ball to spare Highlights of The Hundred match between Trent Rockets and Oval Invincibles.

Alice Capsey chipped in on her return from injury as defending Hundred champions Oval Invincibles made it two wins from three this season after edging out home side Trent Rockets by five wickets with one ball remaining...

Capsey missed Invincibles' loss to Southern Brave on Sunday with an ankle injury but made her presence felt at Trent Bridge, contributing 24 from 18 balls after being involved in three of the wickets to fall in Rocket's 112-8.

The right-hander's two fours and a six, coupled with New Zealander Suzie Bates' 41 off 32 balls, appeared to have Invincibles coasting to victory and the requirement was five from the final 10 balls.

However, Rockets spinner Bryony Smith then took two wickets and conceded just three runs from the next eight deliveries, before Marizanne Kapp (34no off 27) hauled the winning four over midwicket.

With the ball, Capsey caught Marie Kelly (0) off her own bowling, ran out Katherine Brunt (1) after dropping a catch onto the non-striker's stumps and then pouched Sarah Glenn at long-off off the bowling of Eva Gray as Rockets lost five wickets in their final 16 balls.

Nat Sciver (59no off 48) top-scored for Rockets but received no real support with Elyse Villani (17 off 16) the next highest scorer. 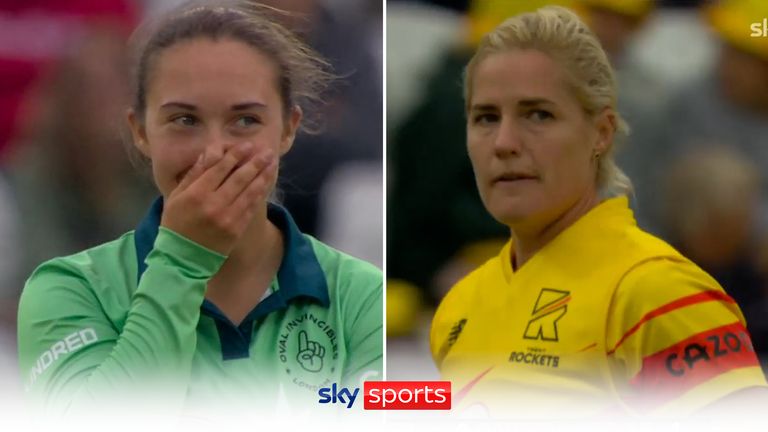 Rockets' Katherine Brunt was run out after Capsey spilt a catch onto the stumps!

Gray was the most prolific and economical member of the Invincibles' attack, dismissing Mignon du Preez (10 off 11) as well as Glenn as she conceded just 16 runs from her 20 balls, half of which were dots.

Kapp then took over for Invincibles, hitting four boundaries - one off Glenn and three off Sciver - before her fifth sealed victory after a late wobble and inflicted a second straight defeat on Rockets.

Hero of the Match, Suzie Bates (41 off 32 balls for Oval Invincibles)

Bates said: "It was a good lesson to make sure we have a set batter at the end - Kapp was brilliant. We probably let it get a bit too close but the way we started with the bat helped us soak up some of the spin overs.

"I am really enjoying batting with Capsey when she comes in. Alice just attacks and that makes my job easy. You just want her to play on instinct and be really brave with all the shots she has. You don't want her to overthink it."

Thursday's Hundred matches come from The Ageas Bowl in Southampton as Southern Brave host Manchester Originals, with both men's and women's games available for free via a live stream on skysports.com, the Sky Sports App and the Sky Sports Cricket YouTube channel.

Brave's women's side finished runners-up last season and have begun this campaign with back-to-back victories. They will be trying to make that three in a row when they face Originals from 3.30pm.

Brave's men's side, meanwhile, won the 2021 edition of The Hundred but will need a sharp turnaround in fortunes to repeat the feat having followed an opening-night win with three successive defeats. James Vince's since play Jos Buttler's Originals from 7pm.