Neil McKenzie explains why he taped bat to dressing-room ceiling 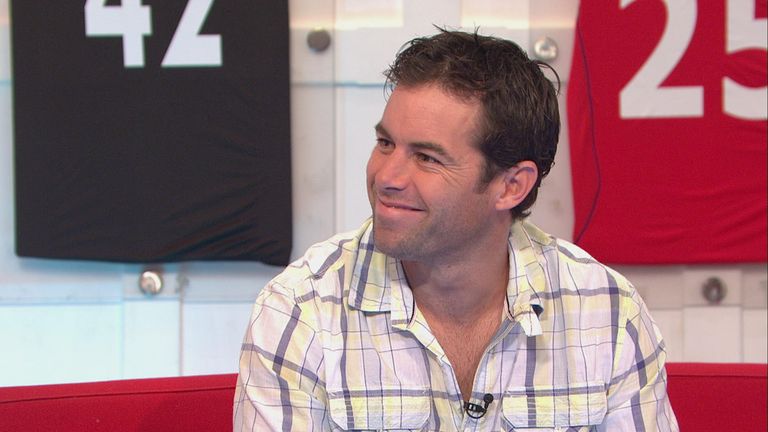 Hampshire batsman Neil McKenzie dropped into the Cricket studio to discuss some of his peculiar rituals.

The South African, part of the Royals side that scooped last term's Friends Life t20 and CB40 titles, is renowned for his bizarre superstitions, but told Matt Floyd and Sarah-Jane Mee that he is not as regimented as he once was.

McKenzie, who played 58 Test matches for his country between 2000-2009, in which time he racked up five hundreds and 16 half-centuries, also explained how his most infamous habit - taping his bat the dressing-room ceiling - came about.

"I haven't quite got the time now for making sure toilet seats are down and checking lights eight times!"

"I think it's more OCD than superstitious," the 37-year-old said of his quirks. "I did lots of things in my youth but with the wife and kids I haven't quite got the time now for making sure toilet seats are down and checking lights eight times!

"[Taping my bat to the ceiling] happened because if you leave the changing room early your kit is put everywhere for you to find the next morning - and one time my bat was on the roof.

"I got a hundred in my next innings so as a joke I put my bat on the ceiling next time - but I think I then got nought so I don't really think it worked!"

McKenzie captained Hampshire - who have made three successive Twenty20 Finals Days, prevailing twice - in their 2013 Friends Life opener against Surrey on Wednesday, with regular skipper Dimitri Mascarenhas ruled out through injury.

The right-hander gave Matt and Sarah-Jane an insight into his leadership style and also explained why he is confident that the Southampton side can maintain their excellent record in county cricket's shortest format.

"I prefer to be a good senior player as opposed to a captain but it was an honour," said McKenzie, who recorded a score of 37 not out in Hampshire's five-wicket win over Surrey at The Ageas Bowl.

"You try to stick with Dimi [Mascarenhas] and the coach's plans, while still putting your flavour on things, but the boys are captains of their own space so it was quite easy."

Johannesburg-born McKenzie added: "Our young boys have played in three T20 finals days now and the YB40 final and we have a good formula [in one-day cricket].

"We have quite a laidback dressing room and are a reactive team and wait for things to happen, and, while that's not always the best way, it seems to be working for us."