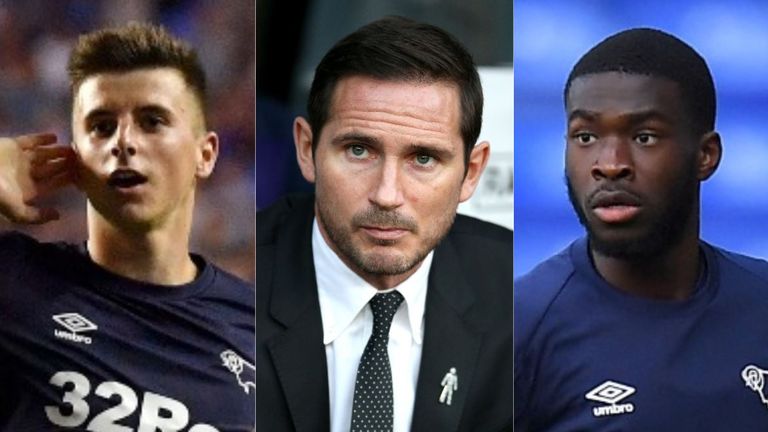 Which young Chelsea players could get a chance in the first team under new manager Frank Lampard?

With a transfer ban ruling out new additions from outside of the club, Lampard - who was confirmed on a three-year deal on Thursday - will have to maximise the resources already at his disposal and that could mean opportunities for some of Chelsea's talented youngsters.

Here, we take a look at six young players who could benefit from Lampard's arrival...

Defender Fikayo Tomori spent last season on loan with Lampard at Derby and earned two 'player of the season' awards - one from the club itself, and the other from the supporters' group - and formed a solid centre-back pairing with captain Richard Keogh. He started in 43 of the 46 league fixtures, and all three play-off games. Tomori has already excelled under Lampard on loan at Derby

With Gary Cahill having departed Stamford Bridge this summer, Chelsea will need some more bodies in defence and Tomori would fit the bill. He is unlikely to start every game, but then again, you would not expect that of a 21-year-old with only one previous first-team appearance for Chelsea.

However, what he would be more likely to get is valuable first-team minutes as a substitute, and cup appearances, which will only improve him further. As the multiple competitions start to build up for Chelsea, he may well find himself with more opportunities for a starting berth.

Mason Mount's successful Derby loan spell followed on from a sparkling stint at Vitesse and the England Under-21 international could now be in line for a spot in the Blues' first team. He started in every Sky Bet Championship game he was available for last season, plus the play-offs, notching 11 goals and six assists.

It will be a fine balancing act for Lampard to integrate Mount into his first-team plans. Chelsea have plenty of midfielders already - Christian Pulisic has arrived, and Mateo Kovacic has signed on a permanent basis. However, Ruben Loftus-Cheek is suffering with an injury, which could present Mount with the chance to seal a spot in the matchday squad.

There is no doubting that Mount has talent and, like Tomori, he needs to start racking up the Premier League minutes if he wants to stake a claim to become a regular fixture in England's top flight. But the good news is that Lampard knows him well, will trust him, and Mount could become more important as the impact of the transfer ban takes hold.

One of Chelsea's main concerns over the next season or so will be strikers, with Alvaro Morata looking to make his loan to Atletico Madrid permanent, Gonzalo Higuain going back to Juventus, and Olivier Giroud netting just twice in the Premier League last season.

Enter Tammy Abraham. He enjoyed a successful loan spell at Aston Villa last term, helping the club back into the Premier League with 25 goals in 37 Sky Bet Championship games, plus a goal against local rivals West Brom during the play-offs.

Abraham has played in the Premier League before, although it was a fraught spell with Swansea in the 2017/18 season, with the Welsh club eventually relegated. It goes without saying that Chelsea will provide him with a much better supply.

The 21-year-old has already stated that he would want to play for Lampard, saying: "I believe in myself [to play for the Chelsea first team] and there is no better guy to play under as well.

"He's someone you have grown up watching and has been at Chelsea forever. He knows about me as well - I played against his [Derby] team in the Championship play-off final!"

There's no reason why Abraham should not find himself with first-team chances under Lampard.

As it turns out, Bayern's interest in Hudson-Odoi worked in his favour. The forward started to get some first-team minutes after their January pursuit, with some impressive performances. He also became the youngest player to make a competitive start for England during a 5-1 European Qualifying win against Montenegro in March, where he assisted Chelsea team-mate Ross Barkley. Callum Hudson-Odoi's season was cut short by injury, but he showed glimpses of potential

However, an Achilles tendon rupture against Burnley a month later ended his season abruptly and the striker had to watch on from the sidelines as Chelsea claimed third place in the Premier League and won the Europa League, a competition in which he had scored four times.

Similarly to Abraham, Hudson-Odoi will profit from Chelsea needing as many attacking bodies as they can get up front next season. At the age of 18, there is plenty of untapped potential for Lampard and Morris to get out of him too.

Behind fellow 2018/19 loanees Tomori, Mount and Abraham, Reece James is the next in line for a shot at Chelsea's first team after a stellar season with Wigan. He was named in the Championship Team of the Year and as Wigan's Player of the Year, starting in 44 of the 46 league games and being named as captain for the Latics' final game of the season. He added three goals and three assists too, in what was a breakout campaign.

James is just 19 but is already staking a claim to be Chelsea's next right-back, offering the promise of youth while Cesar Azpilicueta prepares to turn 30 in August. Admittedly, James is unlikely to oust the ever-present and reliable Spaniard straight away, but he will certainly benefit from the role of understudy.

Wales international Ethan Ampadu has only a handful of first-team appearances, but he has been in and around the first team since his move from Exeter City in July 2017. What should work in Ampadu's favour is his versatility - he can operate as a centre-back or as a defensive midfielder - although Chelsea already have plenty of options in midfield, particularly with the talents of N'Golo Kante and Jorginho in their ranks.

The Guardian has reported Ampadu could go out on loan to Aston Villa and Lampard may well see the value in a run of first-team football for the player, who only made eight appearances for Exeter.

Chelsea had a whopping 41 players out on loan last season, which can be seen as an advantage for a club who will not be able to sign anyone new for a while. There are some big names at their disposal too, such as Victor Moses (Fenerbahce), Tiemoue Bakayoko (AC Milan), Michy Batshuayi (Crystal Palace), Kurt Zouma (Everton) and Morata (Atletico Madrid) - with Chelsea able to cut the latter's 18-month loan short should they desire.

It is hard to predict whether Lampard will want to bring these players back into the fold. Morata looks settled in Spain, as does Bakayoko in Italy, although some may argue that he deserves a second chance to prove himself at Chelsea.

Moses and Zouma have had runs in the first team - Moses in particular was one of the star players under Antonio Conte - and Lampard could be the man to bring out their best again.

As for Batshuayi, the 25-year-old has been pushed from pillar to post since joining Chelsea and really needs an extended spell in a good quality first team to build his confidence. Whether that is under Lampard remains to be seen.

In regards to other young players, there are not many more who you would expect to challenge in the first team. A new team, more loans, or a spell with the U23s are their most likely path.