Spanish publication Diario AS report that Real Madrid are working on an economic plan to sign the Paris Saint-Germain forward Kylian Mbappe in 2021; Zinedine Zidane is a long-term admirer of his countryman 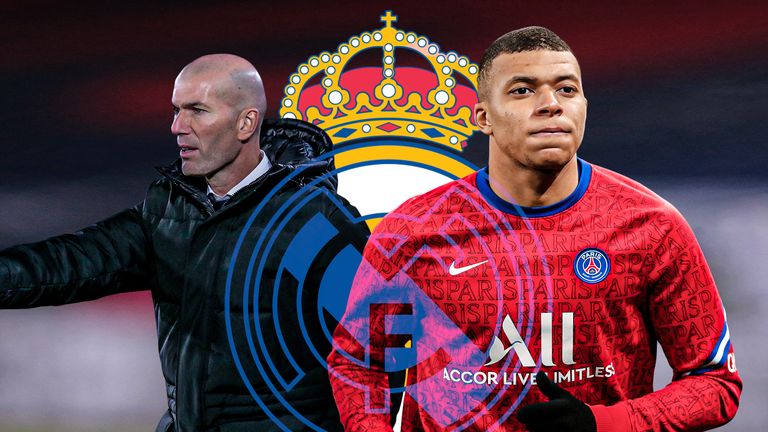 The city of Madrid is currently a zombie town, and that's not just down to a global pandemic. Spain has been buried in recent days by the country's worst snowstorm for the past 60 years.

The adverse weather conditions claimed Atletico Madrid's La Liga game against Athletic Bilbao with roads in and out of the Spanish capital blocked due to Storm Filomena.

For Zinedine Zidane, it has been another unwanted obstacle. He and his Real Madrid staff were made to wait for hours at Barajas Airport before being allowed to fly ahead of their game of Osasuna last weekend.

His players subsequently froze as Madrid missed the chance to go top of La Liga following an uninspiring 0-0 draw at El Sadar in Pamplona.

The result highlighted once more the need for Real to strengthen their attacking options if they are to claw in their cross-city rivals Atletico, who remain top by a point but with three games in hand. Moussa Dembele's imminent arrival at the Wanda Metropolitano only heightens the need for reinforcements. 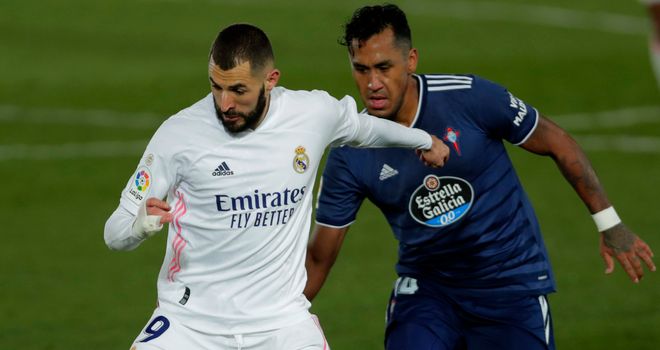 Karim Benzema has 12 goals for the season in all competitions, but besides the Frenchman there is no other member of the squad that has at least five goals to his name so far this term.

Zidane complained after the clash with Osasuna went ahead, but he knows that is not sustainable if Real are to defend their title.

"We've handled it badly, but we did what we could on this pitch," he said. "It wasn't a football match. It should have been suspended. The conditions weren't right for a match. I'm repeating myself, but that's how it is."

Benzema has now gone three games without scoring, and the stalemate demonstrated how Real still struggle to break down sides content to sit back with a low block.

So will Zidane be able to strengthen this month? Real's goalless draw at Osasuna came after another stalemate at Elche

Kylian Mbappe, with 12 goals in 14 Ligue 1 matches this season for Paris Saint-Germain, has been Real's long-term target for some time.

Sky Sports understands that Liverpool are not currently trying to sign the forward, but Real will have to generate funds this year in order to prise the forward away from the Parc des Princes.

On Tuesday, Spanish publication Diario AS ran the headline 'Formula Mbappe', claiming Madrid are working on an economic plan to sign Mbappe in 2021.

One reported option would be to raise between £90m and £135m by selling squad players alongside an expected £720m in revenue when fans are permitted to return to the Santiago Bernabeu later this year.

The club's president, Florentino Perez, has had close contact with PSG's Qatari owners but shifting out the deadwood could prove the biggest stumbling block given the wages of the players in question. 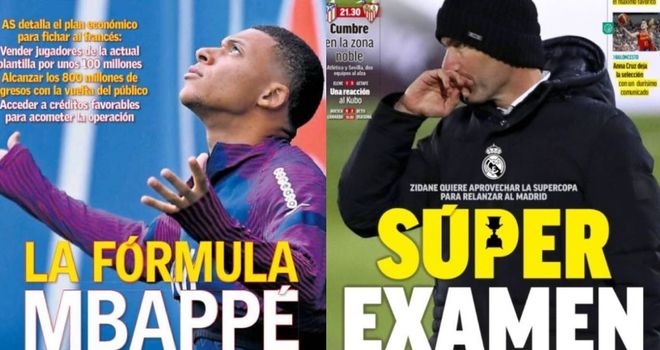 Gareth Bale, Isco, Dani Ceballos, Luka Jovic, Marcelo and Brahim Diaz are said to be the six surplus to requirements, and Real are keen to sell in order to pave the way for the PSG striker's arrival should the French giants demand a likely fee in the region of £200m.

But Spanish football expert Alvaro Montero doubts whether Real will be able to generate the necessary funds, and the noises coming from Spain following Tuesday's striking AS headline is that Barcelona are more likely to swoop.

"There is no specific mention of Real Madrid so maybe the formula in fact involves Barça," Montero told Sky Sports. "I don't think Real are going to sell six players."

Montero confirmed to Sky Sports this week that the club are yet to finalise talks with Sergio Ramos over a new contract, despite the defender being offered a two-year deal on reduced wages as a result of the economic climate. Ramos is on £312,000 a week, the third-highest earner at the club behind Gareth Bale and Eden Hazard.

Mbappe's current deal expires in 2022 and Real will be able to pay the player's annual salary of £19m, the report claims. But the arrival of Mauricio Pochettino is likely to complicate any such move away given Mbappe will be central to his own vision at his new club.

Pochettino confirmed that Mbappe is in "perfect condition" to face Marseille in the Trophee des Champions on Wednesday, and the Argentine admitted he is becoming accustomed to the constant speculation surrounding the star striker.

When asked about the Real link, he said: "When you are in Paris, the rumours are always amazing. We're connected with many different names. It happened with me at Tottenham, at Southampton and at Espanyol. Of course, here is no different. For sure, now is a moment to talk and people are talking about rumours.

"We will be having internal discussions with the club and with [sporting director] Leonardo, and the club will communicate with you as soon as anything happens. But I can't be focused on this."

But is the formula for such a high-profile transfer ever clear-cut?

In spite of their perceived state of privileged seclusion at a time where financial constraints are being felt across the globe, PSG are not awash with cash. Indeed, the French champions are in need of balancing the books more than most elite clubs.

Moise Kean's loan move from Everton has so far exceeded expectations, and Carlo Ancelotti says the club are willing to talk with PSG about Kean's future.

French football expert Jonathan Johnson told Sky Sports on Tuesday that Pochettino will sit down with Leonardo in the very near future to look at potential incomings this month, but the prospect of Mbappe being sold to facilitate making Kean's switch permanent is still far from being on the table.

Pochettino has already said of the World Cup winner: "Big players like Kylian can play in different spaces. You may see him more at one time on the left, on the right or as the second striker but the most important thing is how he feels on the pitch and how we can profit the most from his set of skills.

Following the weekend's 3-0 win over Brest, Pochettino added: "Mbappe is a special player. He came back in good shape after the break, with a very good state of mind. He is the top scorer in the championship. We hope that he will have fun and find the performances of which he is capable."

Mbappe only has one-and-a-half years left on his current contract and the outside chance he could quit Ligue 1 and walk away for free in 18 months is a daunting prospect for the PSG hierarchy.

"There's no way Mbappe or Neymar could leave this month but the big priority is extending their deals, which expire in 2022," Laurens told Sky Sports.

"It's a big challenge - the club doesn't want to let them go on a free in the summer of 2022; if they still only have one year left on their deal this summer, the price will be much lower.

"The club are quite confident - at least that's what they're saying - that both want to stay. If they renew their deals, even if they want to leave in 2022, the money will be better for the club. Mbappe has been previously linked with a move to Liverpool

"There is clarity now with the new manager so that should help but it will be very interesting to follow. Especially for Mbappe, if Liverpool and Real Madrid could make a deal for him, though I'm not sure they could right now - we're talking 200m, 250m euros.

"What chance of Messi? I think they will try to find a way of doing it. It would be incredible but putting the numbers together, to me it seems impossible with FFP, with the pandemic, with the wage bill. They could be paying 150m a year just in wages. Pochettino slightly opened the door by saying the big players are welcome but I don't think it's financially realistic."

Zidane will for now remain a long-term admirer and watchful observer of Mbappe, but the hope is that with supporters returning through the gates once the Covid-19 pandemic eases, the club will be ready to strike.

Pete Graves and Dharmesh Sheth are joined by ESPN football expert Julien Laurens to discuss the job facing Mauricio Pochettino at PSG and what that could mean for the likes of Neymar and Kylian Mbappe as well as the likelihood of a move for Barcelona's Lionel Messi.

Frank Lampard's future at Chelsea is under scrutiny following a poor run of form, the panel assess whether the Blues need to once again back their boss in the transfer market or start looking for a replacement.

Is this the window Mesut Ozil finally leaves Arsenal? The panel touch upon that and if Lyon's Houssem Aouar is the long-term replacement for the German.