Watch Claressa Shields fight Ema Kozin next Saturday in February 5, live on Sky Sports; she said: "Not a lot of US fans get to have the experience of going to see what fans in the UK are like. He told me a lot about his experience fighting Ricky Hatton" 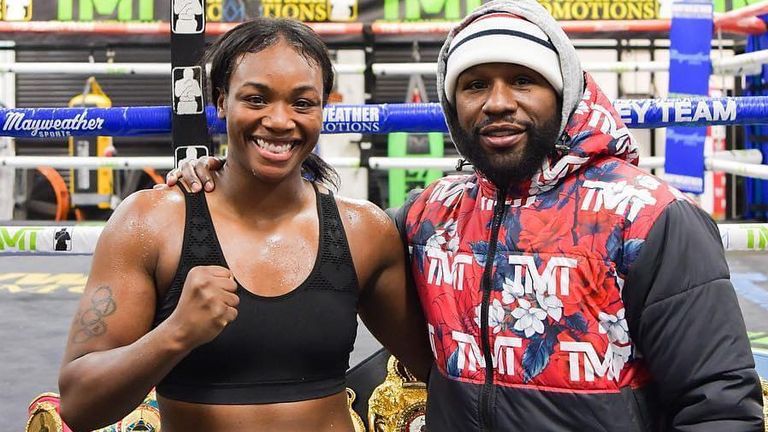 Ahead of her fight in Cardiff Claressa Shields has said that her confidence is sky high due to the backing of Floyd Mayweather.

Claressa Shields says Floyd Mayweather has used his experience of fighting Ricky Hatton to advise her on what to expect from UK boxing fans.

Shields is set to make her UK debut as a professional on Saturday in a world title defence against Slovenia's Ema Kozin in Cardiff, live on Sky Sports.

Shields, who will defend her WBA, WBC and IBF middleweight titles as the co-main event alongside the all-British grudge match between Chris Eubank Jr and Liam Williams, spent some time at Mayweather's Las Vegas gym during her preparations for the fight.

Mayweather never fought in the UK, but his 2009 bout with Ricky Hatton in Las Vegas saw thousands of British fans travel to the US.

"Floyd told me I was going in the right direction, said Shields, who last week said Mayweather plans to be ringside for the fight.

"Not a lot of US fans get to have the experience of going to see what fans in the UK are like. He told me a lot about his experience fighting Ricky Hatton.

"We talked a lot about my skills, but also about the difference between amateurs and pros. In the pros you really have to stay calm and take your time. Even in two-minute rounds, he was telling me to slow down and really see those shots coming."

Victory for Shields against Kozin would set up an undisputed middleweight championship fight with Britain's WBO champion Savannah Marshall.

Shields, 26, has yet to lose in 11 fights as a professional boxer, though she did suffer an MMA defeat in October, losing to Abigail Montes in her second fight in the sport.

Slovenian Kozin, Shields' opponent on February 5, is also undefeated as a professional, having won 21 of 22 bouts to date - drawing once vs Mexico's Irais Hernandez, who Kozin beat in a re-match.

Shields explained that her decision to train in Las Vegas was initially based around getting in some altitude training, with receiving Mayweather's guidance an unexpected bonus.

Shields added: "Cardiff has some altitude like Las Vegas, and there's no altitude in Flint. I wanted to have my lungs feel that burn. I ran at 10,000 feet of elevation.

"The opportunity with Mayweather just kind of presented itself. Floyd heard I was coming and he opened up his gym to me and my team. It was great to see him spar and be in his presence. It was great to talk to him too and really see what he's like.

"It's great to hear that he's a huge fan of me and that him and his kids like to watch my fights. It was a great experience overall."

Mayweather's last professional bout came in 2017 when he beat Conor McGregor to take his record to 50-0, but Shields says the 44-year-old could still compete at elite level.

"Floyd's in great shape," Shields said. He was sparring a 21-year-old for eight rounds and he wasn't even always taking breaks between rounds.

"He can still do whatever he wants to do inside that ring. If he wanted to, he'd give all those guys problems at 147 and 154. From what I saw, his legs and his motor are still working."