Rosie Eccles: Being Lauren Price's Olympic sparring partner nearly killed me but it was right to do

Rosie Eccles had lost her Olympic dream but she helped Lauren Price achieve hers. Now at the Commonwealth Games Eccles wants to step out of that shadow and star for Wales

Four years ago Rosie Eccles and Lauren Price were key sparring partners for one another at the Gold Coast Commonwealth Games.

Since then Price has excelled. She became amateur World champion, Olympic gold medallist and turned professional with BOXXER and Sky Sports.

Eccles has suffered. She endured heartbreak in Olympic qualifying and had to recover from a debilitating, and excruciatingly painful, virus.

Now at the Commonwealth Games in Birmingham, Eccles intends to step out of the shadows and take on the mantle for Welsh boxing.

"I've achieved European and Commonwealth medals and lots of other international medals. But I haven't quite had my day in boxing. A bit of luck, a bit of unfortunate timing with things and a bit of everything else that all goes into boxing, I don't think it's quite fallen into place for me yet," Eccles told Sky Sports.

"But I've just kept chipping away behind the scenes. Sometimes that's not a bad thing. Lauren got what she deserved and I think maybe it is time I step out of that, step out of that shadow."

Eccles was selected for GB's Olympic squad but lost her first bout at the qualification event for the Tokyo Games. Even though she later got a revenge win over the Russian, Saadat Dalgatova, who beat her in the qualifier, her Olympic dream for that cycle at least was over.

However Eccles remained in the gym to serve as Price's main sparring partner ahead of the latter's triumphant Games in Tokyo.

"I chose to stay in camp and help Lauren and I was her main sparring partner all the way up to the Olympics," Eccles explained.

"Mentally it was really tough and it nearly killed me doing it but it was what was right and I did that to support Lauren and I'm really pleased at what she's gone on to achieve. Because in boxing you don't always get what you deserve.

"She cleaned up as an amateur and now she's on to the next thing and she's obviously still based at GB so we won't be far from each other once I'm back either. Probably many spars to come!

"I want her to go on and do well in the pros and hopefully I go on and top that in the amateurs as well and bring back that Commonwealth gold and that Olympic gold medal as well round my neck in two years' time." 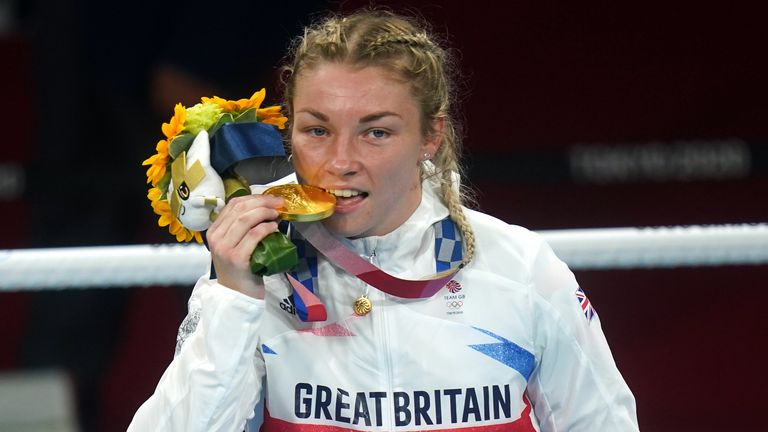 Olympic gold medallist Lauren Price explained her goals within the sport, as well as revealing her experience of being awarded an MBE.

Eccles has her first bout at these Commonwealth Games on Wednesday and the Welsh light-middleweight will have something to prove against India's Olympic and World medallist Lovlina Borgohain.

Eccles has had to move up to 70kgs as well as 66kgs, the Olympic weight, isn't in these Commonwealths.

"I always say the bigger they are the harder they'll fall. I know I can beat these girls. I've just got to be really switched on when it comes to my boxing and the range. It doesn't faze me really. I know I'm very physical for the weight. I might not have the size but I think I've got what I need to get in and do the job," Eccles said.

"If I turn up to the best of my ability then I succeed I think. It's on me to make sure the best me turns up on each day.

"You hope for the best. You think, 'I've put the work in, I know I've got the talent, the ability.' You've just got to execute it and that's that final little bit now."

She is highly motivated ahead of the contest, not just to win her first bout but to go all the way at this tournament.

"It's shocked me how much I do want it. It really matters to come back and bring back gold. That's all that matters right now in my head," Eccles explained.

"The World and the European Championships - they're massive and they're important, but the Games are special.

''Representing Wales we only get to do it as a multi-sport event literally at the Commonwealth Games. To me it's got massive sentimental value.

"I can't even tell you how bad I need to be on top of that podium."