Joseph Parker's power is at "120" per cent ahead of the Anthony Joshua fight, says the WBO champion's chief sparring partner Malik Scott.

The New Zealander's team have confirmed he underwent surgery on both elbows before the heavyweight unification clash with Joshua, the WBA 'super' and IBF champion, in Cardiff on Saturday, live on Sky Sports Box Office.

American Scott was welcomed back into Parker's camp as a sparring partner after helping him prepare for September's world title win over Hughie Fury and says there is far more speed in the 26-year-old's punches since the operations at the end of last year. 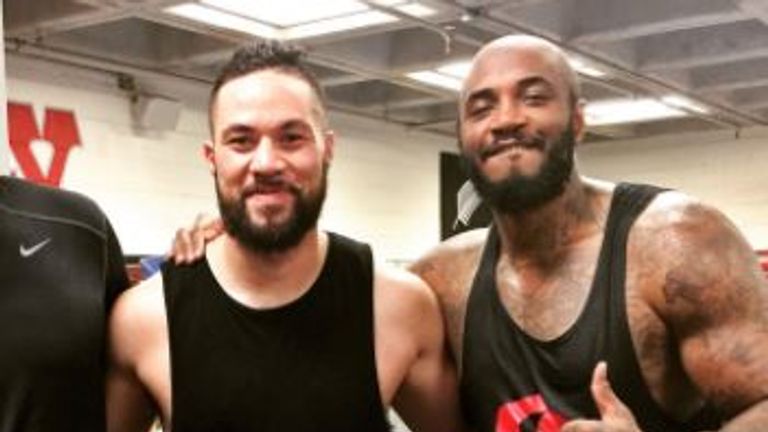 A totally different power now. I will say the last time it was like 70 per cent to me. Right now it's at 120.

"When he was getting ready for Fury, there was times in sparring where we were having to stop," Scott told Sky Sports.

"I don't think that the elbow, the shoulder, none of that is an issue right now. The only thing that's an issue, the most important thing, is there are two young lions, two great champions, and they want to rock. I cannot wait to see it.

"A totally different power now. I will say the last time it was like 70 per cent to me. Right now it's at 120.

"The reason why I say that is, because I come from a perspective of Joseph Parker never had thudding power. He's always had accurate power. The speed slowed down because of the elbow.

"Now that the elbow is fixed, the speed is back up, which means it gets to the target quicker. Which means you don't see the shots coming, which causes more pain, and more knockouts."

The Philadelphian is fully aware of the threat posed by Joshua, having watched the British fighter's own sparring with Wladimir Klitschko, and tipped him to reach the top of the sport.

"We spent a lot of time together in the Wladimir Klitschko camp when he was a young lion," said Scott.

"Right after I watched him spar Wladimir, I told people, this kid is going to be heavyweight champion of the world. I just watched him do more than hold his own with Wladimir Klitschko.

"A year or two later, he beat Wladimir Klitschko in a world title fight."