"These names, these top fighters, we can make those fights happen, and that's what we're going to be doing."

Kell Brook is considering 'many options', despite being denied the Amir Khan fight, and will discuss potential opponents in America or Britain.

The Sheffield man will plan a new career move with promoter Eddie Hearn next week after Khan turned down a British battle to take a WBO welterweight title fight with Terence Crawford.

Khan: Could be Crawford then Kell

Jessie Vargas, who is also promoted by Hearn, has been holding talks about a 147lb fight with Brook in America, while Liam Smith is willing to face his super-welterweight rival 'down the line', and former WBO champion Jeff Horn has also welcomed a 154lb bout in Britain. 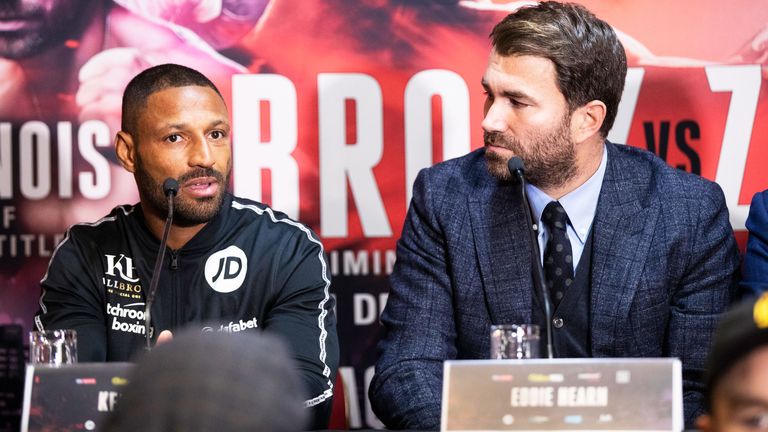 The options are there, they've got to make good business sense, and overall the right fights for us.

"Yeah, Jeff Horn's a name, an Australian fighter," Brook told Sky Sports. "There's many options for me. It's not like I haven't got any options. I'm a known name in America from fighting Spence and beating Porter, and fighting Golovkin. My name is there, it's relevant.

"These names, these top fighters, we can make those fights happen, and that's what we're going to be doing.

"I've heard his [Vargas] name being mentioned. He is a name, he's been in with some top operators. The options are there, they've got to make good business sense, and overall the right fights for us."

Smith returns against Sam Eggington in Liverpool on March 30, live on Sky Sports, and Brook believes they could share the ring again in the future after past sparring sessions.

"Me and Liam Smith have been mentioned before and if they announced me and Smith, I think the fans would like the fight.

"It is a good fight, I've sparred with him a few times before. He's better than I thought, he's a very good fighter, so I think it is possible that fight could be made. We need to sit down and see what options are there. Business moves. We're not young teenagers now."

Horn's promoter Dean Lonergan says Brook still needs to prove his credentials at super-welterweight after moving up following his stoppage loss to Errol Spence Jr in 2017.

"If Kell Brook is serious about fighting at 154, surely he should look closely at Jeff Horn next," Lonergan told Sky Sports.

"The whole point of moving up from 147 was that Kell struggled to make that weight. As he gets older that is going to be harder to make, Brook admitted this himself after the Errol Spence fight, so why even entertain Vargas at 147?

"Jeff Horn brings constant pressure that makes for an exciting fight, as was demonstrated when he beat Manny Pacquiao - and now he's hitting a lot harder