Irish champion will secure bout with WBC champ Persoon on Joshua vs Miller undercard in June if she takes WBO belt from Volante on Friday, live on Sky Sports

Ireland's unified world lightweight champion can add a third world belt when she battles Rose Volante on Friday in Philadelphia, live on Sky Sports, and victory would secure a summer showdown with Persoon on the undercard for Joshua's fight with Jarrell Miller on June 1, live on Sky Sports Box Office.

Promoter Hearn confirmed he intends to deliver a massive fight between Taylor and WBC champion Persoon, with all four of the division's world titles at stake in Madison Square Garden. 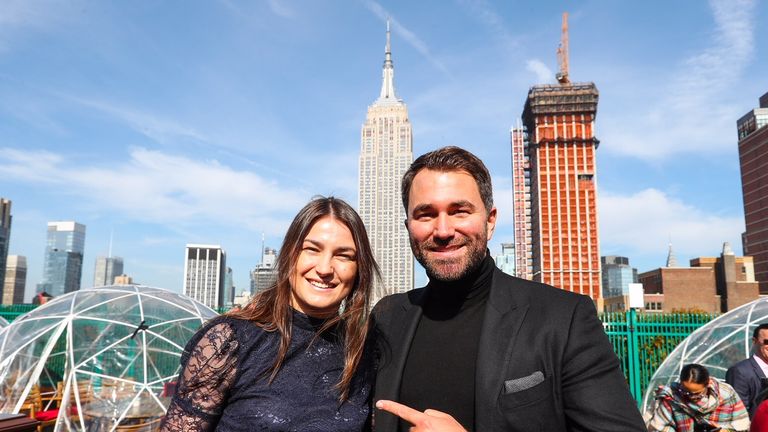 It would just be the most amazing occasion.

"Yes, correct," Hearn told Sky Sports. "Delfine Persoon actually won at the weekend, impressive stoppage, and if Katie can get past Volante at the weekend, we want to make the undisputed fight on the AJ card at Madison Square Garden.

"It would just be the most amazing occasion."

But Taylor must firstly overcome WBO champion Volante, an undefeated Brazilian, who has stopped both of her challengers since winning the title in December 2017.

"She's got a tough fight against Volante," said Hearn. "She's got a good team, is incredibly strong.

"They are bang up for this fight, all the pressure is on Katie Taylor, but we know she's a beast.

"We know she is, in my opinion, pound-for-pound the best female fighter in the world, and her long-time objective was to be the undisputed champion. She's effectively two fights away from that.

"That could happen on June 1, if she's successful on Friday."

Joshua and Taylor both claimed Olympic gold at the London 2012 Games, and Britain's heavyweight star admits he has been studying her ring skills.

"When I watch her, I learn from her as well," Joshua told Sky Sports.

"Even as a champion, I watch her and think I need to do something like that. She has her skills and technique down to a tee."