'The Bronze Bomber' can boost hopes of an elusive undisputed title fight against Anthony Joshua by defeating mandatory challenger Breazeale at the Barclays Center in Brooklyn, with Wilder targeting his 40th knockout in his unbeaten 41-fight career.

A stunning final-round knockdown of Tyson Fury allowed Wilder to retain his WBC belt with a draw in December and after a rematch was pushed back, Breazeale received his shot at the title following a long-running feud with the champion.

Wilder insists a blockbuster battle with Joshua can happen in the future, but must firstly overcome Breazeale, who has responded with three knockout wins since his sole defeat at the hands of AJ in June 2016.

"We need to see one champion, one face, one name," said Wilder. "It is a mighty task to getting that complete. It takes cooperation with a lot of people to make that happen.

"Everybody wants to see the big fight but there are certain things we need to do - [Breazeale] is the mandatory. One fight, one step at a time.

"I bring the excitement, I hold all the keys, I am the man in the heavyweight division. Ain't no other fighter doing what I'm doing."

But Breazeale holds his own ambitious plans and aims to become a world heavyweight champion at the second attempt.

"I know my golden ticket to getting my rematch with Joshua is getting the WBC title, so I'm definitely coming to ruin the show, spoil the night," said Breazeale.

"At the same time, I'm going to get gratification for some of the bad blood we've had in the past by just putting him [Wilder] down on the canvas. Being able to get in the ring and punish him." 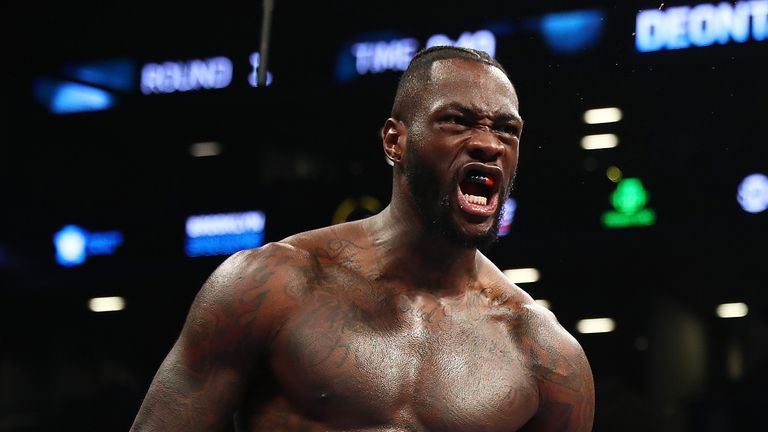 Deontay Wilder will fight Dominic Breazeale live on Sky Sports on May 18 in Brooklyn.

"All eyes will be on 'The Bronze Bomber' as he defends the WBC belt in New York, and the following weekend cruiserweight king Oleksandr Usyk joins the top division by taking on Carlos Takam on May 25, also live on Sky Sports.

"It's sure to be explosive with Joshua, Wilder and Usyk all jostling for position in the heavyweight scene."