Joshua vs Ruiz Jr: Dillian Whyte says his name 'stands out' on a new shortlist for Anthony Joshua

Dillian Whyte says his name "stands out" on a new shortlist for Anthony Joshua and believes a bumper British battle should be staged later this year.

Joshua defends his WBA 'super' IBF and WBO belts against Andy Ruiz Jr in New York tonight, live on Sky Sports Box Office, and his next career move remains unclear after WBC champion Deontay Wilder announced a rematch with Luis Ortiz, and then a second fight with Tyson Fury.

Whyte and Joshua could not agree terms for a Wembley fight in April, with the Brixton man voicing his frustration at insufficient preparation time, and he questioned whether his Brit rival will now reopen talks for a rematch.

Asked if he should now be Joshua's top choice, Whyte told Sky Sports: "Common logic does say that.

"I'm No 1 for one of the [WBO] belts that he does hold, but for some reason I can't get the mandatory. They seem to have Usyk ahead of me, even though he hasn't had a heavyweight fight yet and I've had many.

"There's no common sense in boxing, the rankings don't matter in boxing."

Joshua had previously admitted he was 'looking at Wilder' and not Whyte, although the 31-year-old insists he remains ready for the unified champion, or any of the division's top names.

Whyte said: "I'm the name that stands out, but he says no, he's not trying to fight me, so what can I do? He said it himself, he ain't fighting Dillian, 'he's missed his chance'. I haven't missed my chance. 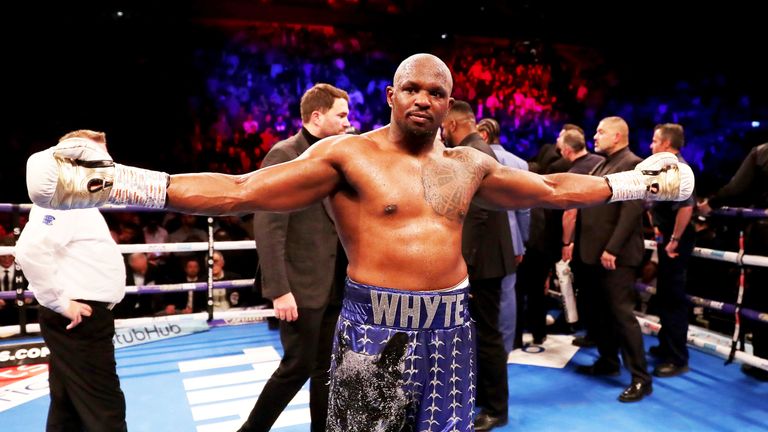 "Why didn't they want to do the same with me? As I've said many times, they had no intention of fighting me, or anyone else in April.

"If these guys want to fight, we can fight. I'm here and I'm ready to fight. Whenever they want it, they can get it."

All the ways you can book and watch the Sky Sports Box Office event.

Whyte welcomed a fight against Fury for the WBC 'Diamond' belt, but the former world champion ruled out a big domestic clash and is now set to face Wilder again early next year.

The most pressing priority for Whyte is a high-risk battle against the unbeaten Oscar Rivas at The O2 on July 20, live on Sky Sports Box Office, as victory could earn a fight against Joshua, Wilder or Fury.

"He [Fury] asked for the 'Diamond' belt, he never thought the WBC was going to be so generous, and they gave it," said Whyte.

"They say I'm an easy fight, I'm this, I'm that and whatever, but none of them are coming forward to fight me. I'm ranked and I'm credible."