"If I come back, it must be in the right fights against the right opponents. You won't see me in with 6'9'' giants again!"

Dave Allen has given his strongest indication yet that he will continue boxing, despite hinting at retirement in the hours after last week's loss to David Price.

Allen tweeted "now probably done" after being pulled out after 10 rounds, suffering damage to his eye socket and tongue in the process.

But he now "fully intends" to return to the ring pending the results of an "overall, proper, thorough medical check". Initial scans were all-clear, he confirmed, adding: "As they always have been".

Allen told Sky Sports: "I've been at a lower ebb than this - I've had worse defeats, and harder defeats. So I'll prove everyone wrong again.

"I'm back to where I was this time last year. I turned that around, and I will do it again." 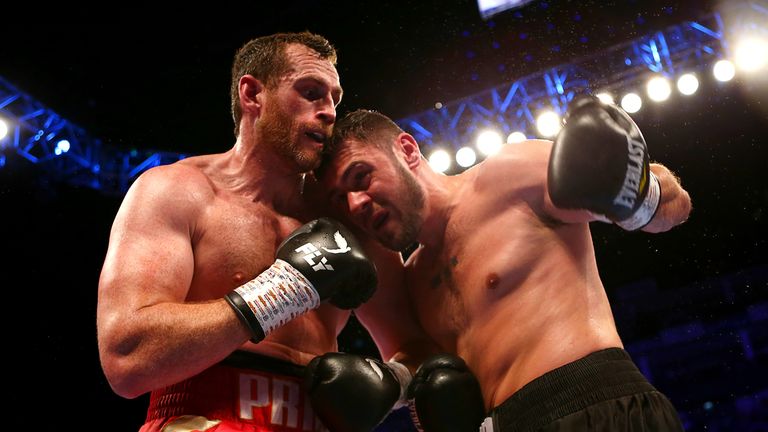 I've been at a lower ebb than this - I've had worse defeats, and harder defeats. So I'll prove everyone wrong again.

Allen had caused worry but tweeting that "my health has been deteriorating" in the immediate aftermath to his defeat to Price.

He now says that, although he has "not felt the same" since last year's defeat to Tony Yoka, he was only referring to "wear and tear" and there is "no reason why I can't box".

The 27-year-old heavyweight from Doncaster has battled mental health issues in the past, and added: "Boxing keeps me on the straight and narrow. It keeps me out of trouble. Without boxing my health could be in a worse place."

THE HEAVYWEIGHT THAT LUCK DESERTED

Vyacheslav Glazkov was robbed of Olympic dream, a world title and an @AnthonyFJoshua fight by cruel injuries – but will he fight again?

"If I come back it must be in the right fights against the right opponents," he said. "You won't see me in with 6'9'' giants again!

"If I'm matched correctly I can be in exciting fights, and that is the plan, if I come back.

"I can make a dent at a certain level. I would love to win a British championship. At times I had ambitions of going further than that. But I have to lower those ambitions. I still want to be British champion and, if I come back, I will work towards a shot at that title."

Price, who has also lost five times, called his stoppage win against Allen "the best performance" of his 31-fight career.

Allen said about Price: "He was exceptional but I was made for him. It was proved that my style worked perfectly for him.

"He was well-conditioned - we had never seen him do 10 rounds at a decent pace. He used a jab for the first time in goodness knows how long.

"I expected a David Price who pawed with the left hand and got tired after three rounds. But I got a hard jab to the face and, after seven rounds, he got stronger.

"He can really punch. He is really powerful.

"Who knows where he can go? Maybe he will fulfil the potential that he had all those years ago. I really hope he kicks on and achieves just a little bit of his potential."