Eddie Hearn: "He signed a contract with us that he was absolutely over the moon with, that gave him the opportunity of a lifetime. He will 100 per cent honour that contract."

Andy Ruiz Jr has claimed that a rematch with Anthony Joshua will be on "my terms" and "in the United States" – but promoter Eddie Hearn has reiterated that a deal has already been finalised to go to Saudi Arabia.

IBF, WBA and WBO heavyweight champion Ruiz Jr broke his silence on a second fight against Joshua on Wednesday by saying via Instagram: "It's going to be on my terms. We are going to bring it back here in the United States". 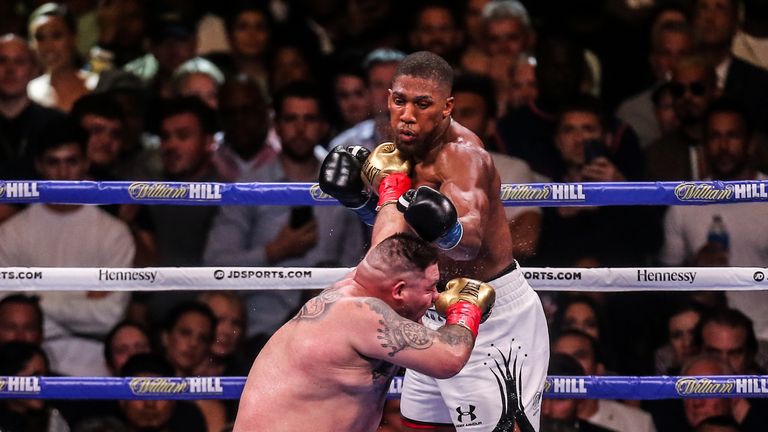 They are contractually bound for the rematch. There are no conversations between the two teams about not doing the fight. I don't perceive a problem.

Joshua invoked a rematch clause which was part of Ruiz Jr's original contract for their first fight on June 1, in which a huge heavyweight upset occurred.

As a result, the details of the rematch do not need to be agreed in fresh negotiations.

"The contract for the rematch was signed prior to the first fight," Hearn told Sky Sports. "They are both signed at the same time. There is no other contract.

"We have to let [Ruiz Jr] know the time, date and venue which we have done. That's it.

"They are contractually bound for the rematch.

"There are no conversations between the two teams about not doing the fight. I don't perceive a problem.

"He signed a contract with us that he was absolutely over the moon with, that gave him the opportunity of a lifetime. He will 100 per cent honour that contract.

"His choice is to have a legal battle that could put him out of boxing for years, or to defend his belts for a lot of money against a guy he has already beaten. There isn't any doubt he will take the fight."

Concern that the IBF could strip Ruiz Jr of his heavyweight championship was allayed on Tuesday.

The governing body have recently stripped Saul 'Canelo' Alvarez of the middleweight title because he didn't agree to fight mandatory challenger Sergiy Derevyanchenko.

Nearly four years ago they stripped Tyson Fury of the IBF heavyweight belt soon after he won it from Wladimir Klitschko because he planned an immediate rematch but Ruiz Jr is expected to avoid a similar fate, despite Kubrat Pulev being owed a mandatory shot.

Hearn said: "Any messing around and Ruiz Jr will lose belts, and he won't want to do that.

"We expect the IBF, WBA and WBO belts to be on the line.

"There are mandatories due but, in our opinion, Ruiz Jr is within his rights to have a voluntary defence. That defence is against Anthony Joshua."