A major fight to define Billy Joe Saunders has so far eluded him but there can be no more false dawns for Britain’s experienced, unbeaten two-weight world champion, who could be a thorn in the side of boxing’s biggest names.

Saunders and his silky, awkward, southpaw style has long been the type of problem that Gennady Golovkin and co simply do not want to entertain. Why risk everything chasing Saunders around the ring and hitting nothing but air for 12 rounds? No thanks.

Now a link-up with promoter Eddie Hearn should result in opportunities for Saunders to test that theory.

Golovkin, Saul 'Canelo' Alvarez, Demetrius Andrade and Callum Smith are the type of fights that must now be delivered for Saunders to finally justify how good he is.

He has won all 28 of his fights so far including standout results against Chris Eubank Jr, Andy Lee and David Lemieux but Saunders' career has been building up to something bigger.

For years he was the odd man out at 160lbs, the WBO titleholder with every other major belt around Golovkin's waist. A fight to crown an undisputed champion was logical except Golovkin waited for, and eventually received, his fights with Canelo.

"Seeing Golovkin and Canelo fight, everybody was raving, but I thought: 'I can beat them'," Saunders said.

"If I can't beat a 37-year-man, I'm 29 and in my prime, then something is wrong. I am confident I would beat him widely.

"The first fight against Canelo I thought [Golovkin] won. Canelo didn't improve but the training camp took its toll [on Golovkin].

"I'd fight Golovkin at whatever weight he wants. I could show people around the world how easily I could out-box him. I would do a better job than Canelo and people would call for that fight after."

"Styles make fights," Saunders said. "He had all sorts of trouble against Erislandy Lara. I thought Lara nicked that fight when Canelo was in his prime. Now Canelo has knee supports and elbow supports."

Golovkin is expected to next contest the newly vacant IBF belt with Sergiy Derevyanchenko but he has unfinished business with Saunders, and has travelled to the UK before to beat Kell Brook. 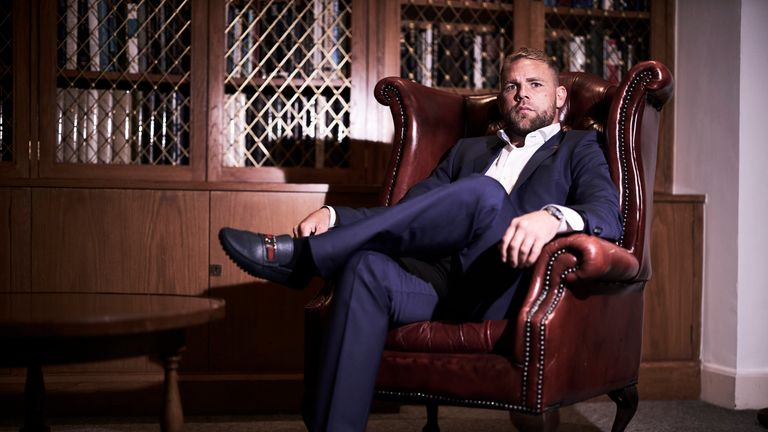 Put me in the ring with someone who is a level above and I will rise. Can I raise myself to where I think I can?

Andrade, who owns the WBO middleweight title previously held by Saunders, also has an identical record of 28-0. The Rhode Island champion is also a southpaw and also promoted by Hearn.

"Andrade would cause Golovkin problems because he has good feet but a counter-puncher would beat him to the punch," Saunders said. "I would take him out of the game."

But the most mouth-watering proposition for Saunders is surely against Liverpool's Smith - a fight that would pit two unbeaten British world champions against each other, both of whom are gagging for a huge occasion to match their talents, both of whom can put gold on the line.

Smith is the WBA champion at super-middleweight, Saunders the WBO. Smith is a towering power-puncher, Saunders nimbler and nippier.

"Callum is brilliant - good puncher, good boxer, all the attributes," Saunders said. "Put me in the ring with someone who is a level above and I will rise. Can I raise myself to where I think I can?

"Callum would be the favourite going into a fight, but I have the beating of Callum Smith."

Negotiations did not bear fruit before Saunders linked up with Hearn but now he and Smith are under the same promotional banner.

Promoter Hearn chimed in: "Another fight I'd love to make would be the Chris Eubank Jr fight because the build-up would be… stupendous."

The animosity is real between Saunders and Eubank Jr, who met five years ago with British, European and Commonwealth titles at stake. Saunders won a split decision, handing Eubank Jr his first loss, but it has always felt like another chapter should be written. Hearn says that rematch could be made this year.

"He's a world-class bum," Saunders snapped. "If I couldn't beat him then I'd never put gloves on again. He's fit and strong, that's it.

"The Eubank Jr fight is one that I would entertain. I would beat him with my eyes closed. I don't put him in the top five or six [in the world]."

Sometimes Saunders' missed opportunities have been self-inflicted - he withdrew from two fights with Martin Murray, and last year was fined heavily by the British Boxing Board of Control for a social media post.

It's time for his boxing to do the talking, because Saunders might be Britain's most polished world champion at the moment.

"I truly believe he has the potential to be a pound-for-pound fighter," said Hearn. "The opportunities are endless."