AJ won't vacate a belt: "I've worked hard to get them so I don't want to give them away" Anthony Joshua on Deontay Wilder, Oleksandr Usyk, vacating a belt, and when he will next fight

Joshua regained the IBF, WBA and WBO titles from Andy Ruiz Jr on Saturday night, while Wilder expects to next defend his WBC gold against Tyson Fury in February.

Joshua told Sky Sports News about facing Wilder: "I'm ready. I've got my belts back and I'm ready to fight him. But I'm not looking too far into the future because it takes your eyes off what is front of you.

"I take it step by step and, by the time I get to unification, I will be ready.

"I'll knock them down one by one and, when the big boys are ready, I'll be ready to become the next undisputed champion of the world.

"I really want to make that happen."

But with Wilder preparing for a second fight against Fury, Joshua has mandatory obligations to fulfil and said that "around March I will defend my titles".

Oleksandr Usyk (WBO) and Kubrat Pulev (IBF) both expect opportunities to challenge for the titles next, leading to suggestions in the past month that a belt could become vacant.

But Joshua has now denied that, saying: "I'm focused on my next fight. Anyone can get it, my resume shows me that.

"I'll be keen to handle my mandatories because the current WBC champion is fighting Tyson Fury. Good luck to them.

Usyk is also in negotiations to potentially face Derek Chisora in early 2020. 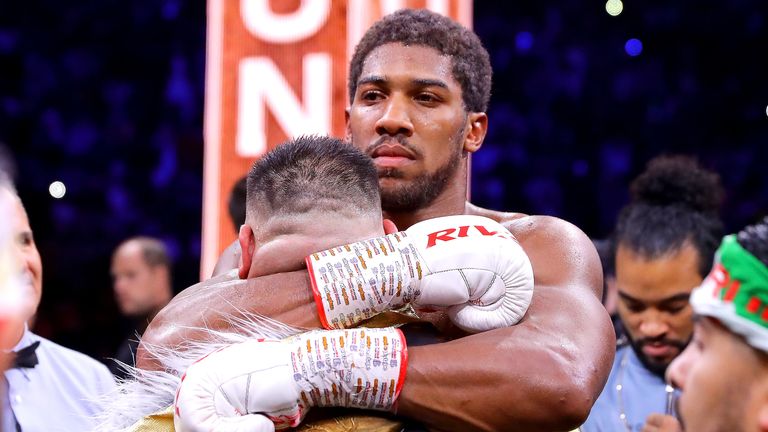 'Governor of the division'

Reflecting on the criticism of his body language and performance in June's shocking loss to Ruiz Jr, Joshua opened up and said: "It drives me. I deserved it.

"Of course people will say these things. I know that I've got to take the good with the bad.

"But I know that I belong here, so if anyone says anything bad I know not to worry. I know I will get myself back on a pedestal.

"As I've always said, I belong at championship level. I've proved it to myself."