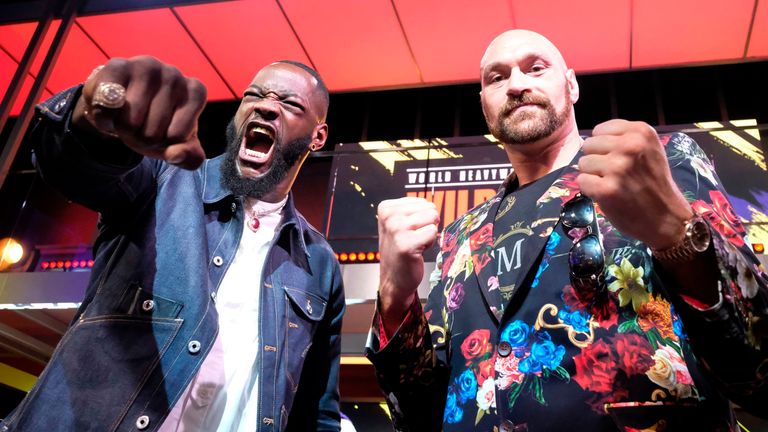 Fury went face to face with Wilder ahead of their rematch

A weekly shop? Nowhere near enough. Tyson Fury's personal chef goes to the supermarket four times per day to fuel his challenge for the world heavyweight championship.

Fury will face Deontay Wilder for the WBC title in Las Vegas on February 22, and Sky Sports spoke to his nutritionist and chef, George Lockhart, as he pushed a trolley around the supermarket to buy their daily goods.

A curry every day (yes, seriously) is giving Fury the energy to fight Wilder again…

What are Fury's basic meals during camp?

He likes a fruit bowl. I’ll give him Greek yoghurt with lots of berries in the morning. The berries have antioxidants which help with recovery.

Every day he has at least one salmon for the Omega-3s. I want everything to be anti-inflammatory.

I cook a lot of curries for him. He usually has something with turmeric. He has one curry per day. I introduce red meat every other day. Red meat is nutritionally dense but takes a long time to break down.

Does Fury ask for a cheat meal?

There should be no reason to even want to cheat. People think healthy food is not tasty. But he's not hungry, he's not craving anything because he has a diverse diet. He has dark chocolate, honey, sweets and spices, salts - his palate gets everything that it wants.

Does he enjoy your food?

Each day I try to give Tyson a diverse group of food. He has a different type of meat with every meal. From what I've heard in other camps he ate chicken and rice. Now we make crazy meals.

There must be something he hates eating…

Is Fury disciplined on a diet?

Do you decide Fury's meals around the type of training he does?

After a hard sparring session I need to refuel his muscles for the next day so his later meals will be bigger. If he does a really hard anaerobic work-out I introduce carbohydrates afterwards.

What do you hope to achieve with Fury?

My job is to increase performance whether you're a heavyweight or a welterweight. The point of a fight camp is not to make weight, it's to get better at fighting.

If I feed you correctly, your performance will increase. If your performance increases you will burn calories and lose weight. A lot of people do it backwards - they pull back calories to drop weight. But by taking calories away, I'm taking energy out of you. So there's no way that performance can increase.

I'm also working with Isaac Lowe who told me: 'Dude, I'm eating more than ever and I'm lighter than I've ever been'.

Are you focusing on Fury losing weight?

Tyson's output is going up so his weight is dropping. But I don't want his weight to drop too much because that would mean losing muscle, as well.

How is the mood in Fury's preparations?

Camp is awesome. These guys are amazing, always energy in the camp. Between Tyson's brothers and coaches, it's a riot! Always something going on.