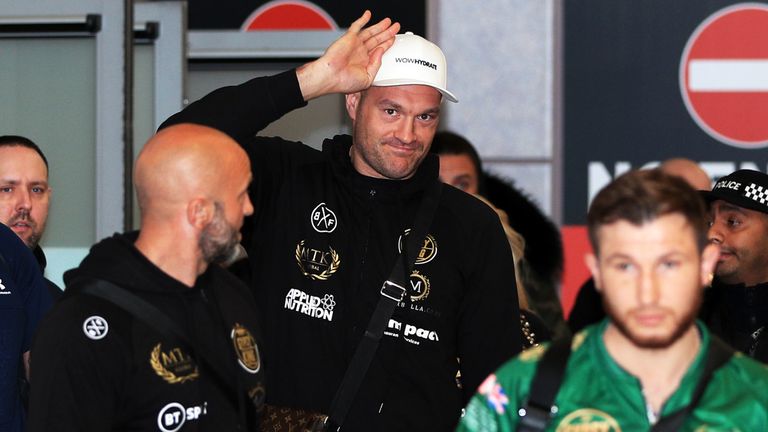 Tyson Fury was greeted by a crowd of fans at Manchester Airport upon his return to the UK after defeating Deontay Wilder in Las Vegas to become a two-time world heavyweight champion on Saturday.

The undefeated Fury landed back in England on Tuesday morning, just over 48 hours after he became the first man to stop Deontay Wilder, winning by TKO at the MGM Grand in round seven.

Fury was welcomed by a group of supporters and press hoping to catch a glimpse of the new WBC heavyweight champion, who was escorted through the crowd by armed police officers.

Eddie Hearn has promised a fight between Anthony Joshua and Fury

The 31-year-old is yet to respond to Wilder's confirmation he will exercise his option for a third fight.

Wilder told The Athletic: "The rematch is definitely going to happen. We're going to get it on. I want to get right back to it."

The American also blamed Saturday's defeat on his ring-walk costume, insisting Fury "didn't hurt me at all".

"The simple fact is that my uniform was way too heavy for me," Wilder told Yahoo Sports.

"I didn't have no legs from the beginning of the fight. In the third round, my legs were just shot all the way through.

"A lot of people were telling me, 'It looked like something was wrong with you.' Something was, but when you're in the ring, you have to bluff a lot of things.

"I tried my best to do so. I knew I didn't have the legs because of my uniform. I was only able to put it on [for the first time] the night before but I didn't think it was going to be that heavy.

"It weighed 40, 40-some pounds with the helmet and all the batteries. I wanted my tribute to be great for Black History Month. I wanted it to be good and I guess I put that before anything."