Joshua: "To control Chisora over 12 or 11 rounds takes some doing."

Anthony Joshua was surprised by Derek Chisora's brute strength in sparring and has new-found respect for Dillian Whyte, who twice overcame the British powerhouse.

Britain's unified heavyweight champion traded punches with Chisora in the gym as he fine-tuned his tactics for a rematch win over Andy Ruiz Jr in December.

Joshua produced a disciplined display of back-foot boxing to nullify Ruiz Jr in Saudi Arabia but admitted he found it hard to hold off the bullish Chisora, who is preparing to fight Oleksandr Usyk at The O2 on May 23, live on Sky Sports Box Office.

“Only a man who knows what it is like to be defeated can reach down to the bottom of his soul and come up with the extra ounce of power it takes to win when the match is even." #muhammadali

"The Chisora from the two fights against Dillian will give Usyk problems," Joshua told Sky Sports. "I watched the Chisora versus Price fight - I thought: 'why isn't Price controlling Chisora?'

"Then I sparred Chisora. The guy is strong, you know. He is no joke.

"And I give Dillian credit for dealing with him twice. To control Chisora over 12 or 11 rounds takes some doing."

Usyk was installed as the WBO mandatory challenger for Joshua after stepping up from cruiserweight, a division where he became undisputed world champion and won the World Boxing Super Series.

Joshua has voiced his respect for his fellow London 2012 Olympic gold medallist, but believes the battle-hardened Chisora might be able to test the fleet-footed Ukrainian star.

Asked how Chisora could be contained, Joshua said: "For Usyk, who is a cruiserweight? Yes, feet and movement. I was big enough to do that to Andy Ruiz Jr, to make him feel the power. Ruiz Jr knew that if he walked in without thinking about it then he might catch something. 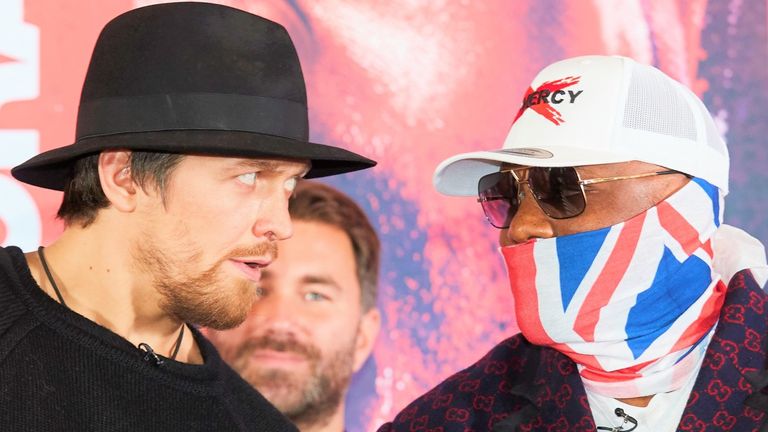 When you're dealing with someone and you're not worried about their power, i.e Chisora may not be worried about Usyk's power, then Usyk may run into some problems.

"When you're dealing with someone and you're not worried about their power, i.e Chisora may not be worried about Usyk's power, then Usyk may run into some problems.

"Then again, Usyk is one of the best fighters the world has ever seen in this generation."

Whyte defeated Chisora on points in a thrilling dogfight in 2016, and then produced a dramatic knockout victory to settle their rivalry in another exciting encounter in 2018.

"He's (Usyk) thinking he can out-manoeuvre Derek, but if Derek is in shape, which I'm sure he will be, he'll have a nasty surprise and he'll have a hard night of work, if he wins," Whyte has told Sky Sports.