Dillian Whyte has warned that Joseph Parker would be "beaten up again" and branded Dominic Breazeale as a "time waster" after being called out by his heavyweight rivals.

Whyte is preparing to risk his status as interim WBC champion and mandatory challenger to the winner of Tyson Fury-Deontay Wilder 3 in his forthcoming bout against Alexander Povetkin, scheduled to take place in Manchester on July 4, live on Sky Sports Box Office.

But the British contender has recently been named as a potential opponent by American Breazeale and New Zealander Parker.

Whyte became the first man to floor Parker in the professional ranks during a unanimous decision win in July 2018, and was far from impressed with the former WBO champion's last win over Shawndell Winters in February.

"I've beat him up already, and I'll beat him up again," Whyte told Sky Sports. "Joseph Parker shouldn't be struggling with guys like Shawndell Winters. Who the hell is that guy? No one has even heard of him. 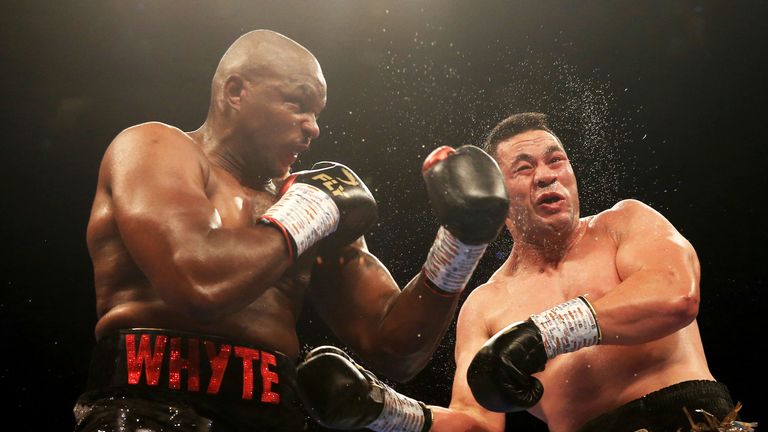 Joseph Parker has had a lot of opportunities and he's wasted them, simple as that.

"Instead of prancing around his kitchen, he should go fight someone credible like Derek Chisora or Oscar Rivas. I tried to fight Joseph Parker, before we even fought, when he was a champion. He didn't want to fight me, but he knows that fighting me now he'll get a big payday.

"I fight Joseph Parker again I will knock him out. I went into the fight with a broken hand and a broken rib and I still destroyed him. I didn't outbox him, I beat him and dominated him. Imagine if I go in when I'm 100 per cent, no injury, what's going to happen? The left hand was broken - it was the hand that I knocked him down with.

Whyte accepted a battle with Breazeale for the WBC interim title last February, but the Californian was then granted a shot at WBC champion Deontay Wilder, who defeated him in the first round.

Breazeale has since suggested he would be too big and strong for Whyte, if they finally share the ring.

"I accepted the fight and he pulled out of the fight, so there's nothing more to be said on that front," said Whyte.

"These guys are time wasters. Clearly he's bored at home and trying to shake off his last knockout, and thinking, 'how can I get another big payday?'

"He hasn't had a single fight since his embarrassing first-round knockout loss to that fraud Wilder, a man who humiliated him both inside and outside the ring. Shameful, pathetic excuse for a heavyweight boxer who should make a comeback and beat a few credible fighters before calling me out."

The 32-year-old is instead channelling his aggression towards a high stakes encounter with Povetkin, Russia's former WBA champion.

"Alexander Povetkin, an Olympic gold medallist, a former world champion," said Whyte, when asked about the threat posed by his next opponent.

"Only lost to Klitschko and Joshua. He's a tough guy and the one thing about Povetkin, he's technically good. He's very experienced and copes with the ups and downs in fights.

"I'm focused on him and I'll give him all the respect he has earned, that's why I'm out here in camp training."