"We have about three more weeks left on the exploring and then we’ll see where the best options lie."

Anthony Joshua and Kubrat Pulev have three weeks to finalise a location for their world title fight, with Britain and Croatia on the current shortlist, says the Bulgarian's manager Ivaylo Gotsev.

Britain's unified heavyweight champion was set to face Pulev at the Tottenham Hotspur Stadium on June 20, live on Sky Sports Box Office, but the fight has been postponed due to the coronavirus and alternative options are being discussed by promoter Eddie Hearn and both fighters.

Gotsev, who guided Pulev towards his second world title shot, held a recent conference call with their promotional team, Top Rank, and Matchroom Boxing boss Hearn to discuss possible venues in a range of countries that would be suitable to stage the WBA, IBF and WBO title fight after the pandemic.

"We've given ourselves four weeks to explore any and all opportunities that are there for the fight," Gotsev told Sky Sports.

"Eddie has spoken to you about the Middle East, which is a great possibility. It makes sense, because those countries were not as hard affected and if you take the right precautions, we could really have a safe environment.

"That's something I want to emphasise, and I can't say it enough times - safety first. We don't want to take a risk against anyone's health, no way no how.

"Whatever makes most sense, wherever we can have the best conditions under the current terms we're living in, that's where we're going to go in. There you have it, we have about three more weeks left on the exploring and then we'll see where the best options lie."

Initial talks have been held by Gotsev about potentially staging the fight at the Pula Arena, a Roman amphitheatre in Croatia that holds around 5,000 people and has hosted music concerts for the likes of Elton John and Foo Fighters.

"Eddie is well aware of it - our team is aware of it," Gotsev told Sky Sports. "We're discussing it as a possibility.

"Why Croatia? Well, first of all, when you look at the map of Europe, it's right there in the centre of the map, and it makes sense for our continent to host the event, and also the venue itself is very inviting, because it's an open air venue.

"You could take the proper precautions and the proper measurements to look after people's safety first. This is not, just go out there and have a fight. No, we've got to protect the people that are involved with the fight.

"From participants to the timekeepers, to the judges. All the stuff that's involved in production of such a big event, we're looking after their health, so we could take proper precautions there and protect everyone.

"Croatia is one of the countries that was not hit very hard, as we know, and also with proper measurements, that could be the case where we're not exposing everybody. An open-air stadium where you could spread out the crowd a little bit makes perfect sense."

At the moment our preference is to stage the event in the UK, but we will keep our options open in terms of alternative venues, if UK is not an option.

Matchroom Boxing boss Hearn admits the most favourable option is to deliver a homecoming fight for Joshua, who has indicated that he wants to fight in front of the British fans after regaining his titles in a rematch win over Andy Ruiz Jr in Saudi Arabia in December.

"At the moment our preference is to stage the event in the UK, but we will keep our options open in terms of alternative venues, if UK is not an option," Hearn told Sky Sports.

Pulev is still open to a fight in Joshua's home country, Gotsev has confirmed, and the 39-year-old, whose sole loss came against Wladimir Klitschko in 2014, intends to rip the world titles away with an emphatic victory. 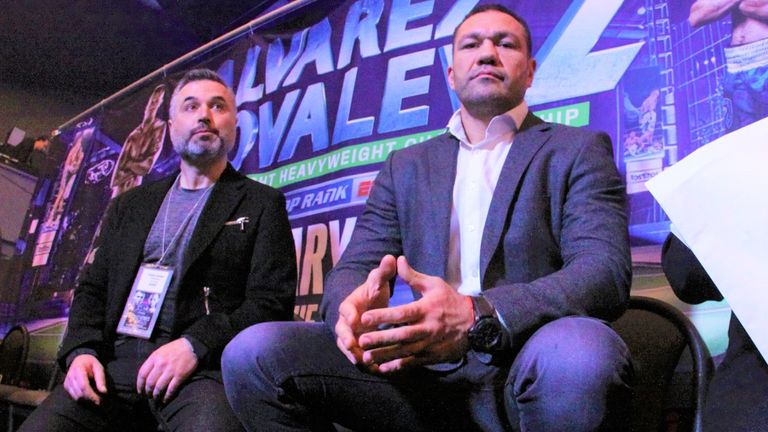 To us, it didn't matter that the fight is taking place in the UK.

"We were willing and we actually agreed to come to the UK, so that's never been a question of neutral ground," said Gotsev.

"It was Joshua's demand, 'I want to go back home.' Okay Joshua, you're the champ, we respect that, we're coming to the UK. Kubrat is coming there to kick your ass, in front of your crowd. No problem.

"They are fighters, it's one against the other. At the end of the day, the public can jump, scream and shout, but it's man e mano in the ring, we've worked out that. To us, it didn't matter that the fight is taking place in the UK."