Whyte vs Povetkin: Anthony Joshua on his respect for Katie Taylor who achieved her own undisputed glory

Anthony Joshua has described Katie Taylor as "phenomenal" as she prepares to defend her undisputed championship at Fight Camp.

Every major lightweight belt is at stake when Taylor defends against old rival Delfine Persoon in a rematch on Saturday, alongside Dillian Whyte vs Alexander Povetkin, live on Sky Sports Box Office.

"I really respect her," Joshua told Sky Sports. "She is phenomenal. She is someone I sit back quietly and learn from.

"She is a real-life athlete - I am more reckless. I take inspiration from her. She is a dedicated athlete."

Persoon's frustration with Taylor stems from the judges' verdict in their first meeting, on Joshua's undercard in New York last year. Taylor won via majority decision causing an irate Persoon to storm off.

"I thought she won," Joshua said of Taylor. 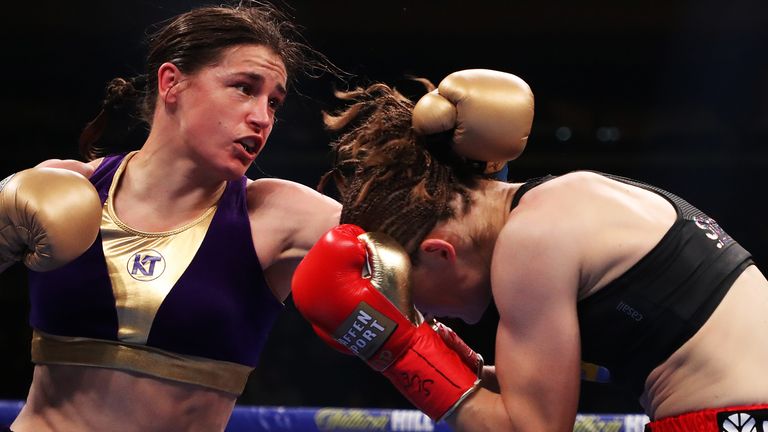 Eddie Hearn: Taylor has a bee in her bonnet about Persoon!

There has been mutual respect between Joshua and Taylor since they both conquered the London Olympics in 2012.

Joshua won super-heavyweight gold for Team GB while Taylor won the top prize at lightweight for Ireland - she beat Britain's Natasha Jonas en route, and a future rematch has been mooted after Jonas' impressive effort in this month's draw with Terri Harper.

Taylor has since fought four times at the same events as Joshua as she built her 15-0 unbeaten record.

Taylor achieved the greatest accomplishment of her pro career on the same night as Joshua was at his lowest ebb. She edged Persoon to become undisputed champion before Joshua lost to Andy Ruiz Jr.

And in doing so, Taylor achieved undisputed glory while IBF, WBA and WBO heavyweight champion Joshua continues his chase of the final piece of the puzzle, the WBC belt that belongs to Tyson Fury.

New possibilities have emerged for Taylor if she can dispatch Persoon on Saturday.

Braekhus was previously a target for Taylor whose attention will now turn to former opponent McCaskill.

It means Taylor could remarkably become an undisputed champion in two divisions.

She will chase it with the admiration of Joshua who is still plotting his own undisputed path.