The writing was on the wall. For Andy Ruiz Jr, sure, but also for Anthony Joshua whose dressing room ahead of their rematch was adorned with bold letters and motivational quotes that were the brainchild of his new secret weapon.

"I'm well prepared" on the door as Joshua entered. "Great - feet, jab, position of hands, defence creates a great attack" were the words that loomed over the challenger as he went through his final warm-up in the final, sacred moments before claiming redemption in the ring.

These messages on the walls were part of the psychology that fascinated Joshua enough to recruit into his inner circle a martial arts guru who preaches "deep thinking" and running barefoot, and whose influence extends into the world heavyweight title fight against Kubrat Pulev on Saturday, live on Sky Sports Box Office.

Welcome to 'The Process' by Joby Clayton.

"It is written down and encompasses all my teachings," says the trainer who joined the team led by Rob McCracken, Joshua's long-term ally, a year ago.

"I use it for someone coming into the gym for the first time and for elite athletes. I use it at the start of every session for mental warm-ups. It is all of my learnings from the past 30 years.

"What interested AJ from my teachings was when I spoke about grace and rhythm. Wild animals move in an incredibly graceful way whether they are the hunter or being hunted - their movements are efficient for their very survival, there is no flair.

"I look to develop this grace within an individual, starting with how to breathe efficiently, then becoming aware of their body and how to generate relaxation.

"Breath work is an untapped avenue in sport and life. It affects the energy of the mind."

The purpose of Clayton, it is made clear, is not to get Joshua fit. It is to challenge his mind which leads to improving his technique.

This is the philosophy he teaches which contributed to Joshua's calm, calculated revenge over Ruiz Jr. It required Joshua to completely buy into the new ideas that were presented to him.

"AJ is now thinking more clearly about what he's doing. People thought he would struggle to have the ring IQ that other boxers possess but, when AJ is in a state of flow, he makes great decisions from a calm perspective."

The motivational quotes on the wall of the dressing room are the final part of Clayton's methodology of how best to ready a fighter.

"They are anchors for the purpose of our preparation," he says.

"'Greatness only' is the mantra that we are using now."

Clayton was inspired by Bruce Lee's 1970s kung fu movies and would watch cult classic Enter The Dragon repeatedly, fascinated by movements he had never seen before.

His father bought him a book for 25p about the life of heavyweight legend Joe Louis which piqued his interest more than school ever did.

He competed briefly as a teenager but, by 18, had already been drawn to coaching. This is his 30th year as a martial arts and boxing instructor.

The passion that Clayton shares with Joshua is an admiration for Cuban amateur boxing.

"The Cubans had a much smaller gene pool to choose from but had this incredible system," Clayton eulogises.

Joshua beat a Cuban in the 2012 Olympic final then, on holiday on the island, sought out a local boxing gym where he was welcomed in a way that foreigners rarely are.

Clayton runs the Wolverhampton boxing gym 'Firewalker' and also trains UFC fighters now but his highest-profile project was to expand the mind of Joshua following a shock first defeat.

He believes in the power of psychology and explains: "I don't know if I've opened his eyes to it.

"He was curious before and that's why he approached me.

"Everything starts in the mind.

"We see big, intimidating people but you don't know what's going on behind their eyes.

Ben Whittaker is an Olympic hopeful on the Team GB team who would regularly receive queries from Joshua about his training tips.

"AJ would ask questions about my style," Whittaker told Sky Sports. "Then he asked about my pad-work and he said: 'I really like your coach'."

Clayton is Whittaker's coach and also his godfather - he disapproved of children fighting so made his godson wait until much later before stepping in the ring.

Joshua accepted his friend Whittaker's recommendation to learn from Clayton, who said about his first day on the job: "I was driving down the motorway thinking: 'Gosh, what am I going to do? This guy is already a world champion!'

"I took it as if he was a complete beginner. We started from the ground up.

"We worked on his stance, we spoke about his breathing, about mindset.

"We did a few sessions where, although we also did physical work, we did a lot of talking about techniques, tactics, my philosophies and whether they could gel with his ideas and the work he already does under Rob."

Whittaker added: "Me and AJ are both athletes so we don't need to work on punch output all the time, we need two hours of technique. He liked that."

Whittaker laughs at his godfather's unique mantras and reveals: "Joby is into meditation and deep breathing. Everything has to be positive.

"He is very spiritual, a very deep thinker. In the corner he will say positive quotes.

"Joby would say to me: 'Brother, if you walk with the wind…'

"But the things he says have stuck with me and that's why my mind-set is so strong.

"He teaches stance, rhythm and flow and that can apply to anything."

Joshua has always been spiritual and Whittaker said: "That's why they have gelled. The way they speak is so deep.

"I saw AJ speak about flow in a recent interview - it was like Joby on the TV, not AJ!"

When Whittaker saw a disciplined and controlled Joshua outpoint Ruiz Jr a year ago, he saw 'The Process' taught by Clayton manifest itself in the ring.

"I could see Joby's input, it was like AJ had boxed out of Firewalker for his whole life," he said. "But, actually, he learned it in weeks."

Move with a positive team & doors will open 💥 pic.twitter.com/ZRQUmyhdBa

2020 began triumphantly for Clayton in the aftermath of Joshua reclaiming his world heavyweight championship.

"I did take personal satisfaction," Clayton said. "But fair play to AJ for turning it around like he did because people didn't think he could box like that after five years of training, never mind five months."

The trainer has since been on the UFC's Fight Island in the corner of Jai Herbert and has also helped MMA fighters Leon Edwards and Tom Breese.

He was more recently in the corner for the successful pro debut of Ramla Ali and has brought Hosea Stewart, an amateur heavyweight from his Wolverhampton gym, into Joshua's camp.

It is testament to Joshua that he is willing to learn from Stewart who has achieved a fraction of his own accomplishments, and also that he has made work a dynamic that brought Clayton and Angel Fernandez into his tight-knit training team led by McCracken.

"It is very respectful," Clayton says about his relationship with McCracken and the other trainers.

"In pro boxing, the boxer is the boss and the coaches are employed to guide and direct. It isn't easy for a boxer to have so many different voices but AJ does it well - he is respectful to all of our ideas. We come together as a team to further his career.

"There is an African saying which I believe in; 'it takes a village to raise a child'."

There is an expectation on Joshua to bulldoze Pulev on Saturday to make an emphatic statement to WBC champion Tyson Fury.

Clayton does not expect a performance similar to the one that beat Ruiz Jr: "I joke to AJ: 'I don't think you can be that boxer!'

"I still want him not to get hit. I want him to be the AJ that is so exciting and devastating. 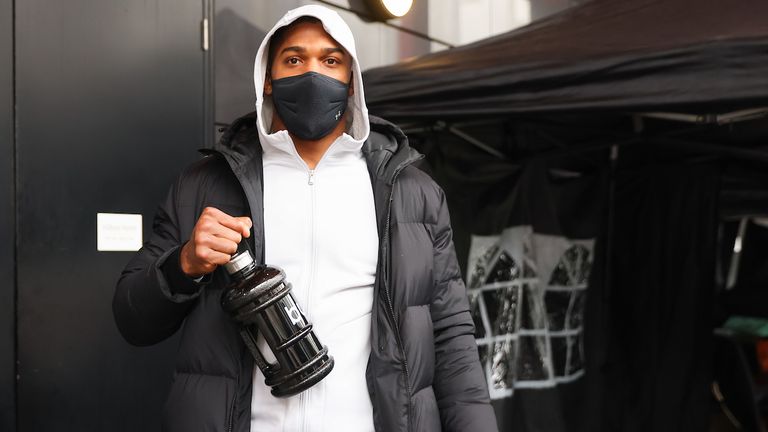 Joshua arrives to 'the bubble' - 'I am ready for war!' 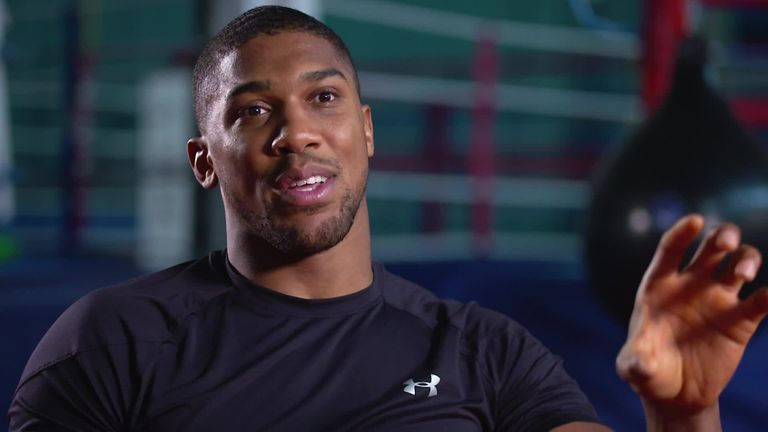 Clayton is reinforcing the psychology that Joshua should enjoy his back-and-forth with Fury for supremacy, rather than become burdened by it.

"These guys are so blessed - they are in such a privileged position to be literally fighting for greatness," he said.

"Their preparation is fuelled by the idea that they can be great. That is a powerful motivation."

'Greatness only' - that is the mantra, expect to hear it this week. Expect to see it on the dressing room walls as Joshua straps on his gloves.

It is only a phrase but it is the final piece of the jigsaw to 'The Process', taught by Joshua's secret weapon Joby Clayton.

Watch Joshua vs Pulev on Saturday, live on Sky Sports Box Office, from 6pm. Book it via your Sky remote or book it online here. Even if you aren't a Sky TV subscriber, you can book and watch it here.