What time are Floyd Mayweather and Logan Paul in the ring?

Floyd Mayweather collides with Logan Paul in an epic exhibition bout as the five-weight world champion shares the ring with the YouTube superstar in Miami on Sunday night, live on Sky Sports Box Office

Floyd Mayweather vs Logan Paul will not start before 3am on Sunday night as the boxing legend collides with the social media sensation in Miami.

Mayweather shares the ring with Logan Paul at the Hard Rock Stadium, with live coverage starting from midnight on Sky Sports Box Office.

But before the main event, former world champions Badou Jack and Jarrett Hurd will return to action, while NFL star Chad Johnson makes his boxing debut in an exhibition bout against Brian Maxwell.

Mayweather has vowed to deliver a harsh lesson to the YouTube star in their exhibition bout, with the rules confirming that knockouts are allowed. 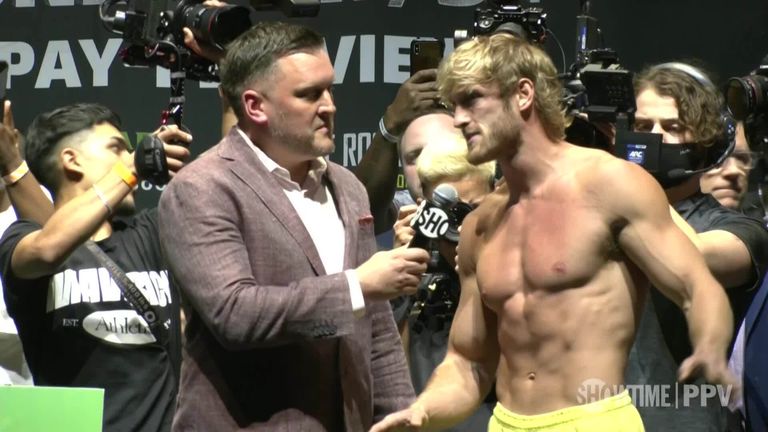 Logan Paul insists he will defeat the 'greatest boxer' in history

"You guys will see the difference."

But Logan Paul believes he can ruin Mayweather's reputation with a sensational stoppage win.

"I know what I have to do, I know what it's going to look like, standing across from Floyd, looking in his eyes," he told Sky Sports.

"He's going to be smiling, I'm sure. Taunting me a little bit. I've seen it, all of it.