"A Puerto Rican against a Mexican in the United States is a dynamite fight," promoter Bob Arum is guiding explosive puncher Edgar Berlanga towards a super-middleweight showdown with Saul 'Canelo' Alvarez 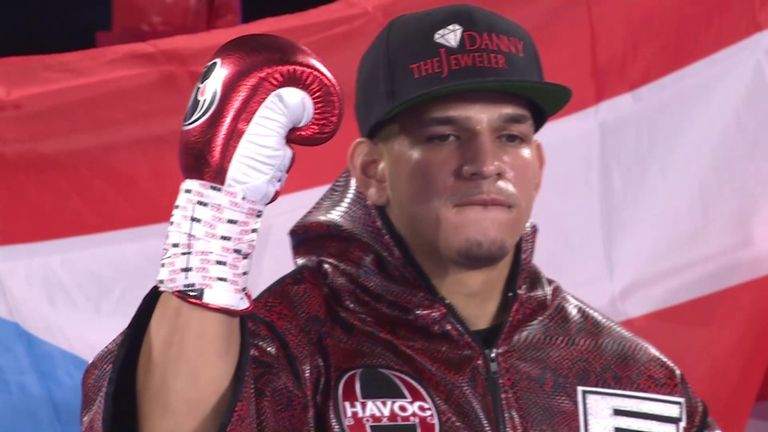 The Brooklyn-based puncher has emerged as a devastating threat, having knocked out 16 opponents inside the first round, while he floored Demond Nicholson on four occasions in his only fight that ended in a points win.

Top Rank boss Arum believes the 24-year-old is on a collision course with Canelo, if he maintains his destructive rise up the rankings.

"We hope, within the next two years, he progresses enough that we can put him in with Canelo," Arum told Sky Sports.

"A Puerto Rican against a Mexican in the United States is a dynamite fight.

"Based on his ability? It depends on him and how he progresses. I think he has the goods.

"We are giving him every opportunity."

Nicknamed 'The Chosen One,' Berlanga can boost his fearsome reputation in the coming months, with Arum hoping to showcase his explosive power on a string of high-profile bills.

"He will appear on [the Tyson Fury vs Deontay Wilder undercard on] October 9 then he will be in Madison Square Garden on December 11," said Arum.

"Then we will take him to Puerto Rico. He is a New Yorker of Puerto Rican origin.

"He will fight in Puerto Rico where he is enormously popular.

"If all goes well, he will fight in June at The Garden in conjunction with the Puerto Rican Day parade, an enormous parade down Fifth Avenue in New York.

"Where it was [previously] Miguel Cotto, we always have a boxing event in conjunction with that event at The Garden."

Canelo's bid to become Mexico's first undisputed champion at super-middleweight has been put on hold after he was unable to agree terms with IBF title holder Caleb Plant.

But the WBC, WBA and WBO champion could revive talks with Plant after pushing back his next fight from September to November.