Teofimo Lopez insists he will not grant Vasiliy Lomachenko a rematch: 'We're looking at Josh Taylor'

"There will be no rematch. Had I lost, they would have never given me the opportunity, so I’m not doing it," Teofimo Lopez tells Vasiliy Lomachenko to forget about a second fight after his win over the Ukrainian 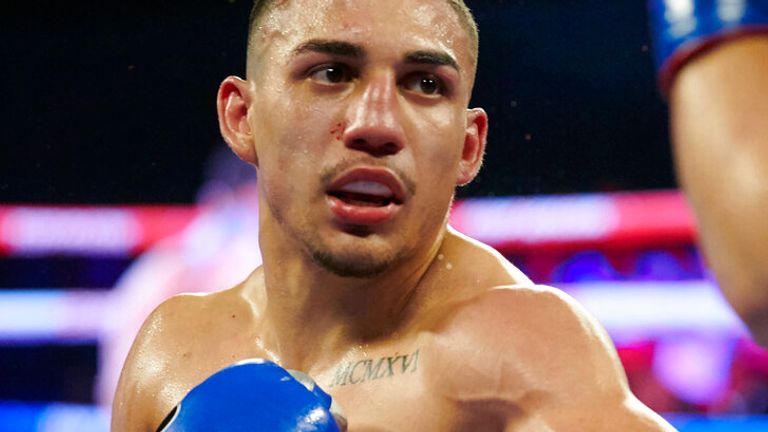 Teofimo Lopez has mocked Vasiliy Lomachenko’s chase for a rematch by saying "he’s fighting my leftovers" – and is turning his own attention to Josh Taylor.

Lopez brought a shock end to Lomachenko's prestigious reign as the world's No 1 lightweight by sealing an impressive points win to unify the IBF, WBA and WBO belts last year.

He will defend his titles against mandatory challenger George Kambosos Jr in New York on Monday October 4.

Lopez told Sky Sports that he has no plans to risk his status as the division's king against his old rival again: "Even the man himself said it, even Lomachenko said.

"He's fighting my leftovers, trying to redeem himself.

"It's cute that everyone thinks he's going to get me again.

"The way I look at it now? We're past that. We're looking at bigger and better things, like Josh Taylor.

"There will be no rematch.

"Had I lost, they would have never given me the opportunity, so I'm not doing it."

The Ukrainian, previously feted as the best pound-for-pound boxer in the world, is next expected to fight Richard Commey, another of Lopez's former foes.

Lopez said about stepping up a division to fight Taylor, the undisputed super-lightweight champion: "The guy can talk all he wants but everybody feels my energy when I step up to the plate.

"I need to get Kambosos Jr out of the way.

"I don't want people to back down."

He vowed to produce against Kambosos Jr: "Explosiveness, ring IQ, footwork. I have got much better since the Lomachenko fight. I have improved to the next level.

"I want to show you what you have yet to see, or haven't seen since the 70s and 80s. This boxing era now is rocky so I want to bring it back to its roots.

"I'm going to knock him out. I don't like this guy.

"I get it. He's playing a part, playing the tough guy. But disrespecting my family?

"I can't wait for his face to beat up my hands!"

Lopez is among an exciting quartet of young, unbeaten American lightweights alongside Ryan Garcia, Devin Haney and Gervonta Davis.

But he insists that his rivals have not earned comparisons to the glorious generation of 'Sugar' Ray Leonard, Marvin Hagler, Thomas Hearns and Roberto Duran.

"Everyone wants to bring back that era of fighters but now we've got YouTubers fighting," Lopez said.

"I'm not scared of anyone. I don't duck or dodge anyone."

Lopez, promoted by Top Rank whose fights are shown exclusively by Sky Sports in the UK, said about debuting in Britain: "Absolutely. Winner takes all. When I get that opportunity in the UK, I won't blow it."