Anthony Joshua and Oleksandr Usyk engaged in a tense staredown

Anthony Joshua and Oleksandr Usyk went face to face in an intense stare-down after unveiling musclebound physiques for their world heavyweight title fight.

Their fascinating collision for the IBF, WBA and WBO belts is on Saturday night at the Tottenham Hotspur Stadium, live on Sky Sports Box Office. 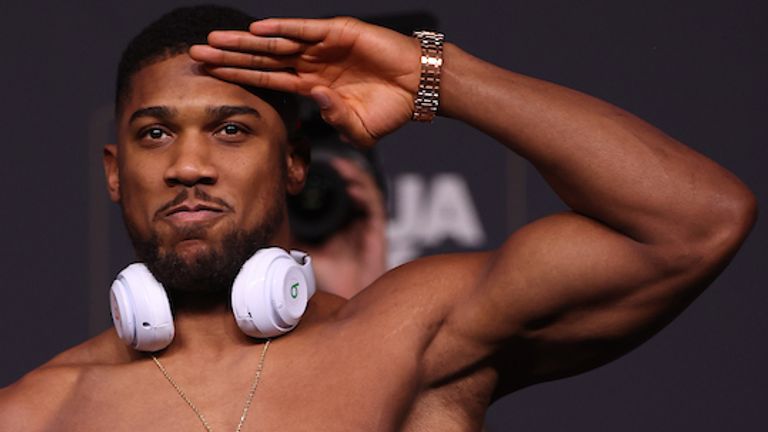 Joshua on his game-plan to fight Usyk

After a lengthy and frosty face-off, they each flexed their muscles and paid tribute to each other's physiques - any suggestion that Joshua would come in lighter to cope with Usyk's speed was refuted by his weight.

Joshua told Sky Sports: "I don't really watch my weight. I don't know why there is a big thing about weight. Maybe because we are heavyweights so people look at us at our heaviest.

"I have been there - I was 18st 2lbs at one stage [for the Carlos Takam fight]. But I still managed to throw a lot of combos and go 10 rounds.

"Now I should be able to do the 12 rounds easily because weight does make a difference.

"As long as you are loose, nimble. Loose and heavy, relaxed shots. I should be good.

"I was heavier and doing it so, now that I'm lighter, I should be able to do it with more ease."

Joshua said ahead of his 11th consecutive world title fight: "There is no game-plan. Just win. Because you never know what is going to happen when the first bell goes."

Joshua and Usyk each won Olympic gold at London 2012. Since then, while Joshua has become a two-time heavyweight champion, Usyk won the undisputed cruiserweight title.

He is now bidding to become only the third boxer to win world titles at cruiserweight and heavyweight.

Joshua said about his mandatory challenger: "Respect? Fear? It's just a fight. I'm not someone who will be disrespectful unless someone is disrespectful to me.

"I respect the man. He has achieved phenomenal things."