Natasha Jonas will make 'final call' on whether her next fight will be Claressa Shields, Terri Harper or another option

Natasha Jonas, after unifying three of the major super-welterweight world title belts, is in the driving seat of her career; With Jessica McCaskill unlikely to be her next fight, there are still plenty of other options including Claressa Shields or a Terri Harper rematch Natasha Jonas will have the final say on whether she takes a Terri Harper rematch, a showdown with Claressa Shields or another option next, according to promoter Ben Shalom.

After completing a stellar 2022 by adding the IBF belt to her WBO and WBC straps with a win over Marie-Eve Dicaire in November, Liverpool's Jonas goes into the new year with plenty of options.

One of those is a rematch with fellow Brit Terri Harper to become undisputed super-welterweight champion. Jonas previously drew with Harper in 2020 when challenging to become super-featherweight world champion. The absence of the offer of an immediate rematch to Jonas remains a source of tension between the fighters' camps, and, with the 38-year-old Liverpudlian now in a strong position with three belts, it remains to be seen whether terms can be agreed.

"She won't be pressured into anything that she doesn't want to do, she'll make the decision at the end of the day, and we'll do our best to facilitate that.

"But ultimately, it's up to her what she wants to do, and we're here to support that." 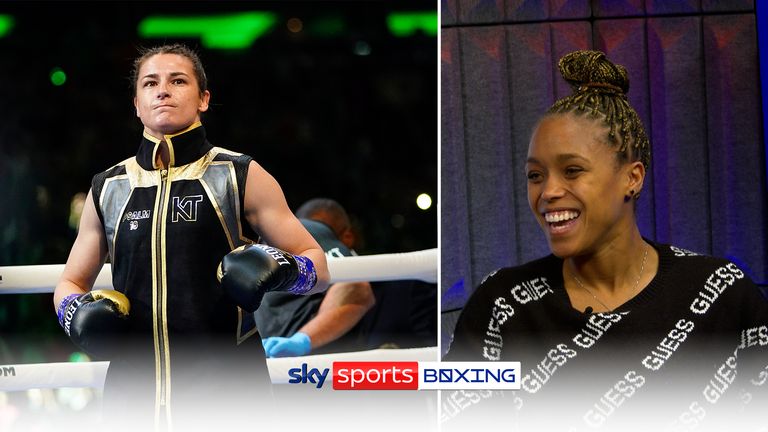 Natasha Jonas is keen to get revenge over Katie Taylor, and her trainer Joe Gallagher believes she can win by knockout

Jonas impressively went up three weight divisions before winning all three of her super-welterweight title fights in 2022, but Shalom believes her best performances could come somewhere between the 154lbs limit and the 140lbs level she was previously operating at.

The promoter had previously favoured a matchup with Jessica McCaskill, the American who was undisputed at welterweight but has recently lost to Britain's Chantelle Cameron for all the major super-lightweight belts.

There also remains the possibility of a meeting with undisputed middleweight champion Claressa Shields, off the back of the American's stunning win over Britain's Savannah Marshall in October.

"I think the McCaskill fight, it doesn't look like it can be made, but I think that would have been at the top of our list," Shalom said.

"I just don't think Tasha is a natural at 154lbs, even though she's done well.

"But with Harper, Shields and whoever else, let's see what's available to her and she'll make the final call."