Manny Pacquiao is not the same fighter since he suffered a savage knockout at the fists of Juan Manuel Marquez, believes Floyd Mayweather's father and trainer.

Marquez sent Pacquiao crashing to the canvas with a straight right hand to bring a premature end to their fourth fight in December 2012 and plunge the Filipino's future in doubt.

Pacquiao had previously beaten the Mexican twice after their first fight ended in a draw but the six-round knockout had some questioning whether he would hang up his gloves.

The southpaw responded by claiming one-sided victories over Brandon Rios, Tim Bradley and Chris Algieri to finally secure a showdown with the undefeated American.

Mayweather Sr, however, who returned to his son's corner in 2013 following a 13-year estrangement, believes Marquez has left the Filipino southpaw's career on borrowed time.

"Once you get hit like he did by Marquez and your ass goes to sleep, it won't take too many more punches before it happens again. He's gone," Mayweather Sr said.

"Anyone who has been in boxing long enough knows what I'm talking about. I don't know what round it will happen in, but when he gets hit like that again, it will happen again. Simple." 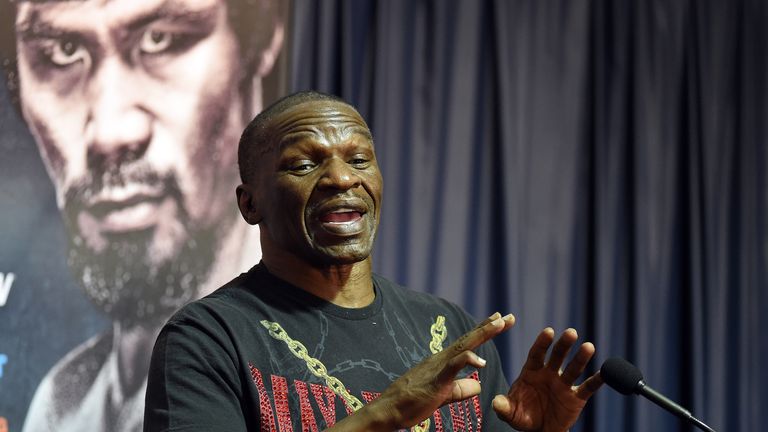 Once you get hit like he (Pacquiao) did by Marquez and your ass goes to sleep, it won't take too many more punches before it happens again. He's gone.

Freddie Roach, Pacquaio's trainer of 15 years, has shrugged off concerns that his star pupil is not the same fearsome fighter he was.

"Manny knows that knockouts are a part of boxing," said Roach, a seven-time trainer of the year. "If you don't want to get knocked out, go do something else.

"It was a bad knockout against Marquez, he was down for a long time. I was worried but when we got back in the gym there was no change, he wasn't gun shy.

"But Floyd has put on extra muscle and can punch when he wants to. So I hope he chooses to come out in the early rounds and tries to knock us out.

"Floyd will be looking to land that big overhand right, which was kind of a sucker shot, a shot fighters like Manny shouldn't be hit with."