Who is Ollie Pope? The rundown on England's new Test batsman

Rob Key on Ollie Pope: "There's an element of Joe Root about his batting, who isn't a bad person to emulate."

Surrey's much-vaunted batsman Ollie Pope will make his Test debut for England in the second Test against India, on Thursday.

The 20-year-old has replaced Dawid Malan in the squad for the clash at Lord's, live on Sky Sports Cricket from 10am on Thursday.

Pope has made a name for himself in the County Championship this season, playing a major part in taking the London side to the summit of Division One.

But what do we know of England's new batsmen? Here we take a look at his credentials…

Who is Ollie Pope?

Sky Sports' Rob Key: "You never know if they're ready. We're often worried about throwing in these young players, but even if you struggle, it helps you realise your potential sooner rather than later. There's an element of Joe Root about his batting, who isn't a bad person to emulate.

"All the people I speak to who know him well say he learns very quickly and mentally he's got what it takes at that level. I think all the signs are very encouraging. It will be a real test for him - you can't think that he will have faced many spinners of the quality of [Ravi] Ashwin, but I'm sure there is a seriously good international cricketer there in the making."

Great day for @surreycricket! A very good win at Chelmsford and what about @OPope32 👏🏴󠁧󠁢󠁥󠁮󠁧󠁿 Awesome news and it will be great to see another of our youngsters on the Test stage! #3Feathers https://t.co/J7DBSp6Fw8

Sky Sports' Michael Atherton: "Pope is very young - he has only played 15 first-class games but he has got a lot of runs, he is averaging over 60 in first-class cricket and 85 this year. He has been in-form but he has been getting those runs at six for Surrey so where he bats for England will be very interesting, if indeed he plays. England might look to play two spinners."

England national selector, Ed Smith: "Ollie has made an exceptional start to his first-class career. He has reached one thousand first-class runs in just 15 matches and is the first division's 'stand-out' batsman this season with 684 runs at 85. The selection panel believe that Ollie's performances and character suggest he is well-suited to international cricket." 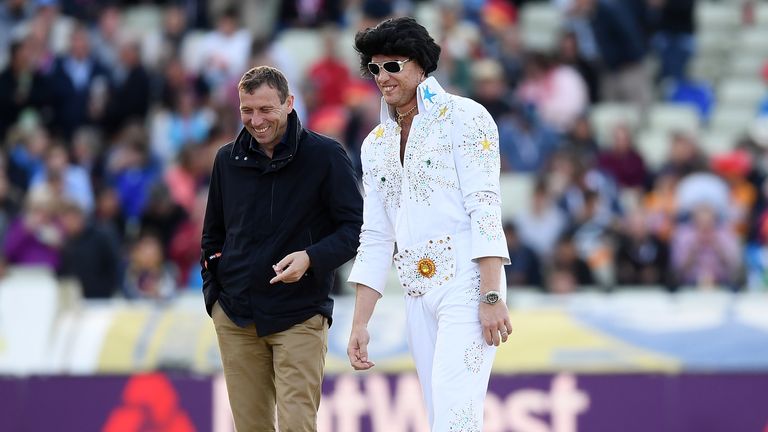 England have always pushed young players through – this is the third 20-year-old we have had in the team this summer (after Dom Bess and Sam Curran). Myself, Nasser Hussain and Mark Ramprakash were all 20, 21, David Gower and Ian Botham before that. To think England don’t pick young players is a bit of a fallacy.

Pope made his Surrey first-team debut in the County Championship in August 2017 against Middlesex at The Oval, in the infamous match that was abandoned after a crossbow was fired on to the pitch after tea during the final day's play.

On his County Championship debut, Pope was one of four teenagers in Surrey's line-up - alongside Sam Curran, Ryan Patel and Amar Virdi - the first time this happened for any club since the Second World War

Although he managed only 25 in the first innings, Pope hit a game-defining fourth-innings century in Surrey's next match against Hampshire to help secure a draw - sharing an unbeaten 158-run fifth-wicket stand with Ben Foakes.

One of the many Surrey players to also be very adept with the wicketkeeping gloves, Pope managed an unbeaten fifty against Somerset as he finished the season with 226 runs from eight innings.

Ahead of this year's county season, Pope was named in the South squad for the North-South series in the Caribbean, which features some of the best young talent from all 18 counties.

The Middlesex-born batsman did not feature in the first of the three-match series, but made an entertaining 42 off 35 in second game and made 68 after being promoted to the top of the order the final match, as well as being handed the gloves in Barbados.

2018 has proved prolific for the right-hander, who has struck three centuries in eight matches for the Division One leaders, including an unbeaten 158 against Yorkshire.

Pope also hit an unbeaten 69 in the reverse fixture at Headingley to keep Surrey's unbeaten run going and is second in the list of Championship run-scorers with 684 - only behind his team-mate Rory Burns.

Ollie Pope played Grade Cricket in Australia over the winter, scoring 997 runs in 23 matches for Campbelltown-Camden in Sydney

Pope has not been as productive in white-ball cricket, managing just one half-century in eight innings in the One-Day Cup this season. A quickfire 24 on the day of his call-up in the T20 Blast, saw Pope help Surrey claim an important victory - and he has a high of 34 in the competition.

Pope has come through the England ranks, managing one half-century - a high score of 78 - in four Test matches for the U19s but fared a little better in one-day internationals managing 283 runs across eight innings, with two fifties.

His sole appearance of the England Lions came in a 253-run Test victory over India A in July. Handed the wicketkeeping gloves and batting at five, Pope struck an unbeaten 50 of 71 balls in the second innings - and took three catches in the match to help the Lions pull off an impressive win.

The hosts will now have just two left-handed players in the top six, in openers Alastair Cook and Keaton Jennings, with captain Joe Root, wicketkeeper Jonny Bairstow and Jos Buttler all right-handers too.

Thanks for the kind messages🙌🏻 Over the moon to be picked in the squad for this second test! @englandcricket pic.twitter.com/sHmW1932jG

Should Chris Woakes get selected ahead of Moeen Ali, it would mean that three of the top eight will be left-handed compared to five in the first Test, which may well help negate some of Ashwin's potency.

Watch the second Test between England and India from 10am, Thursday on Sky Sports Cricket and Main Event.