Moeen Ali took 3-7 and Sam Curran 2-24 for Chennai Super Kings as Rajasthan Royals capitulated to a 45-run defeat in the IPL once Jos Buttler was bowled by a beauty from Ravindra Jadeja.

Buttler (49 off 35) had the Royals handily placed at 87-2 after 11 overs in their pursuit of 189 for back-to-back IPL wins - only to then be dismissed by left-arm spinner Jadeja from the first ball of the 12th over with a delivery that pitched on leg stump and spun back to hit middle and off.

Rajasthan lost five wickets for eight runs in 3.2 overs after Buttler was castled, with off-spinner Moeen pinning David Miller (2) lbw in the 13th before striking twice more in the 15th as the Royals collapsed in Mumbai, with late boundaries from Rahul Tewatia (20) and Jaydev Unadkat (24) only reducing the margin of defeat. 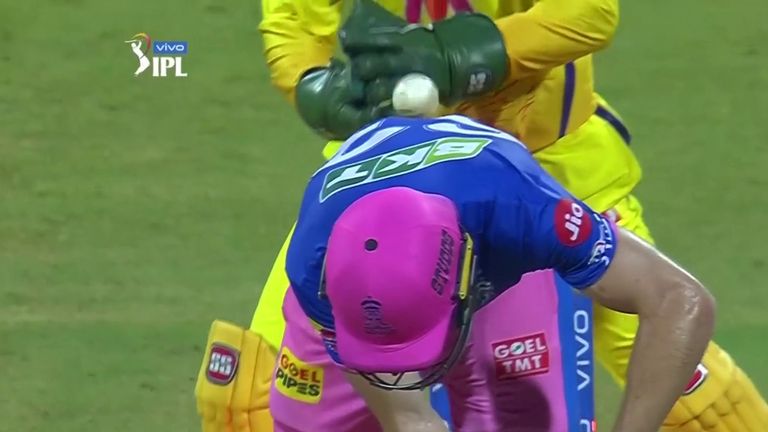 Moeen's England and Chennai team-mate Curran had earlier dismissed Manan Vohra (14) and Royals skipper Sanju Samson (1) during his first three overs, while both Curran (13 off 6) and Moeen (26 off 20) had contributed in Chennai's total of 188-9 at Wankhede Stadium.

Super Kings' innings was one of cameos - Faf du Plessis (33 off 17) top-scoring - and they were labouring a little at 133-5 with four overs remaining, only for Curran, MS Dhoni (18) and Dwayne Bravo (20no off 8) to help their side plunder 55 runs from that point.

Rajasthan were making a decent fist of the run chase with Buttler well set to ignite in the second half of the innings but once he fell one run short of a 12th IPL fifty, Royals unravelled, finishing on 143-9 as they suffered a second defeat in three games to start the tournament.

Chennai, though, have shaken off their opening-game thumping at the hands of Delhi Capitals to make it successive victories and move second in the early table, with the decisions to sign Moeen during the auction and retain Curran from their 2020 squad looking very shrewd moves.

Moeen has impressed batting at No 3 and followed scores of 36 against Delhi and 46 versus Punjab Kings with another useful knock, which included two sweet leg-side sixes, before helping himself to the best IPL bowling figures of his career.

Curran then flourished during the powerplay with the ball, conceding only 12 runs from three overs up front and having Vohra caught at deep midwicket and Samson pouched at mid-on, while he would also have dismissed Buttler for seven had Shardul Thakur held on at short third man.

Rajasthan were 45-2 once Curran removed Samson but Buttler - whose innings included five fours, two of them via successive reverse sweeps off Jadeja, and two sixes - went on to add 42 with Shivam Dube (17) for the third wicket to keep his team in contention before the dramatic collapse saw CSK run out handsome winners.

Rajasthan have been hit by injury problems in this tournament with Ben Stokes to play no further part after fracturing his finger and England team-mate Jofra Archer missing at least the start of the competition as he recovers from hand surgery and manages an elbow issue.