The Hundred: Danni Wyatt fires Southern Brave past Birmingham Phoenix and to top of the table

Southern Brave chase down 141 to beat Birmingham Phoenix and make it three wins from three to move top of The Hundred table; Danni Wyatt hits five boundaries and four sixes in match-winning 69 not out from 40 balls 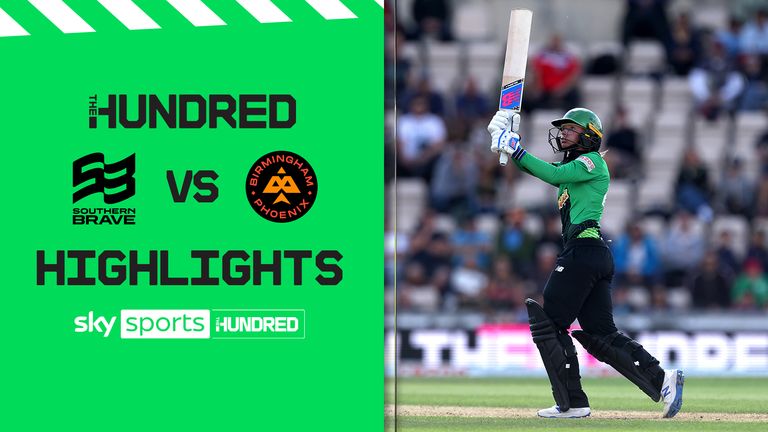 Danni Wyatt struck a magnificent, unbeaten 69 from 40 deliveries as Southern Brave chased down 141 to beat Birmingham Phoenix and jump to the top of The Hundred table.

Wyatt struck five boundaries and four sixes in her blistering knock, the last of which was launched away over the deep square-leg boundary to clinch victory with a whole 18 balls to spare.

Wyatt was supported superbly in the chase by England team-mate Sophia Dunkley (41 off 23 balls) and West Indies captain Stafanie Taylor (22 not out off 14). The Brave have now won all three of their opening games.

The Phoenix had looked to be primed for an upset as they posted an impressive score of 140-4 after being put into bat, with captain Amy Jones continuing her fine form for the tournament with 42 not out from 26 balls.

In reply, Dunkley was initially the aggressor after the Brave lost Indian opener Smriti Mandhana (5) cheaply. Wyatt had just 18 runs to her name when Dunkley fell for 41 in the most unfortunate of circumstances as she was run out off a deflection from Abtaha Maqsood when backing up out of her crease at the non-striker's end.

But, in response to the setback, Wyatt kicked on through the gears, clearing the ropes four times as she fired the Brave to victory.

Wyatt was almost a near-unanimous choice, given her match-winning efforts, although Dunkley, Taylor, Jones all too were impressive with bat in hand.

Also, during the Phoenix innings, Amanda-Jade Wellington was a standout with the ball, the legspinner claiming two wickets - key batters Shafali Verma (22) and Eve Jones (33) - for the cost of just 16 runs from her 20 balls.

What a way to go! Dunkley is run out at the non-striker's end by Maqsood off a dropped catch.#SouthernBrave 🟢 #BirminghamPhoenix 🟠 #TheHundred 💯

And she ultimately stole the show, not just with her superb innings, but with the way she ended the match in sensational style - with six runs needed, but still 19 deliveries with which to get them, she saw things off with one sweet swing off the bat for six. Box office!

Southern Brave Hero of the Match, Danni Wyatt: "It was a really pleasing innings and a great win for us. I was just batting and if it was in my area I'd go for it, and Dunks [Sophia Dunkley] was going really nicely which helped me as well - it didn't put any pressure on me.

"The girls have been on fire in these first three games. Hopefully we can rest well - we've got a massive game on Sunday at Lord's against the London Spirit, who have got an exceptional team, so that's going to be a cracker." 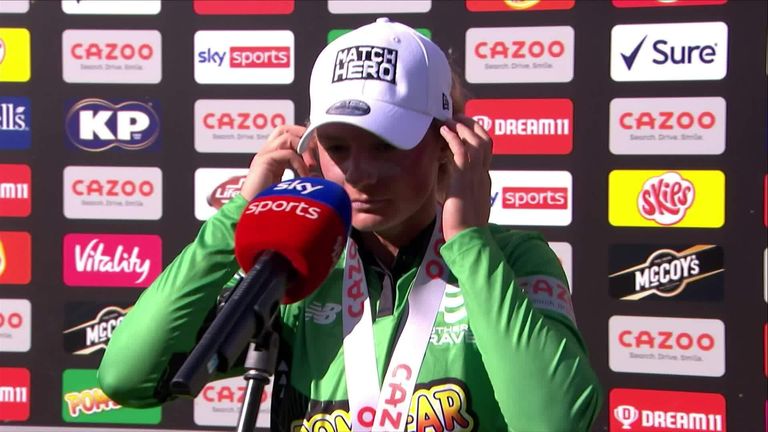 Birmingham Phoenix captain, Amy Jones: "We were aiming for 150, and they really tightened up at the end. We faced a lot of yorkers and they dried it up at the end quite well.

"It was an incredible innings from Danni Wyatt. We needed to control where we were hit better - we know she's good over cover, so for her to get her boundaries mainly there is quite disappointing for us.

"We needed clearer plans with the ball - that's what has let us down today."

We've got another 'Super Saturday' for you, with as many as four Hundred matches to be played over the course of the day!

Welsh Fire and Manchester Originals kick things off in Cardiff, with their women's game - both looking to register their first wins of the comp - underway from 10.30am on Sky Sports The Hundred, before the men follow on from 2pm.

Meanwhile, up in Leeds, Northern Superchargers and Oval Invincibles battle it out at Headingley. A win for either women's side could see them leapfrog the Brave to the top of the table - watch from 2pm on Sky Sports Mix - while the men round off proceedings from 5.30pm back on Sky Sports The Hundred.

You can also follow along via our live streams available on the Sky Sports Cricket YouTube channel.