Southern Brave captain James Vince struck a typically classy 60 from 38 balls as his side chased down their 152-run target with two balls to spare; Liam Livingstone continued his fine form, smashing 68 from 44 deliveries in a losing cause for Birmingham Phoenix 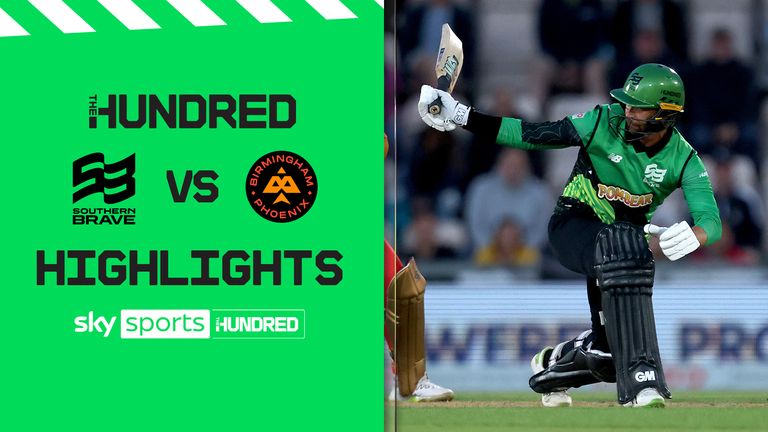 Southern Brave got their first win of The Hundred, at the third time of asking, as they edged out Birmingham Phoenix in a thrilling finish at The Ageas Bowl on Friday night.

Chasing 152 to win, Brave skipper James Vince - who earlier won the toss and inserted the Phoenix - struck a typically classy 60 from 38 balls to seemingly have his side on course for victory, only to then fall to his captaincy counterpart Moeen Ali with 42 balls remaining.

Devon Conway (34 off 27 balls) rallied, but after he was bowled by fellow New Zealander Adam Milne (3-15) with 19 balls left and 32 runs still needed, the Brave chase appeared to be falling away.

But Chris Jordan came in and his unbeaten 17 off nine deliveries got the hosts over the line to earn them this first win.

Earlier, after a circumspect start to the Phoenix innings, the in-form Liam Livingstone struck an unbeaten 68 off 44 balls - smashing five boundaries and four sixes in his innings - to propel the visitors up to a total of 151-3.

Miles Hammond played a useful supporting role with his 44 not out, from 29 deliveries, as the pair put on a century partnership to end the innings. But it wasn't to be enough.

Vince. His innings was the most fluent of the match, although his wicket to the 58th ball of the Brave chase will have frustrated him as another game very nearly slipped away from his side.

💬 Oh my goodness - it almost went in the bushes! 💬 @darensammy88 & @KP24 loving it as Vince tees off!#SouthernBrave 🟢 #BirminghamPhoenix 🟠 #TheHundred 💯

Livingstone and Hammond both deserve special mentions too, as well as Phoenix fast bowler Milne, whose three-wicket spell had seemed to wrestle the game Birmingham's way.

The Phoenix fightback is well and truly on as Milne cleans out Conway.#SouthernBrave 🟢 #BirminghamPhoenix 🟠 #TheHundred 💯

However, the end of Milne's final set of five proved to be costly and key in deciding the outcome of the game. The Brave still needed 16 from the final seven balls of the game, with only four wickets remaining, but Milne then bowled a wide and a no ball to give the opposition two free deliveries.

At the end of it all, the Brave suddenly needed just nine runs to win from Tom Helm's final five and Jordan, who hit a boundary first ball and was dropped off the third, got them over the line.

James Vince, Southern Brave: "It got a bit tense towards the end, but delighted that we could get over the line tonight and get our first win on the board.

"It's never nice getting out but luckily we bat deep. We've got the luxury of having those allrounders, those quick bowlers that are able to give it a bit of a whack at the end, and CJ [Chris Jordan] with his experience was useful at the back end.

"It's a fairly short tournament so to get that first win on the board, particularly at home, should hopefully give us some momentum going forward. We know in these competitions if you make use of that momentum and that winning habit, you can get on a bit of a roll." 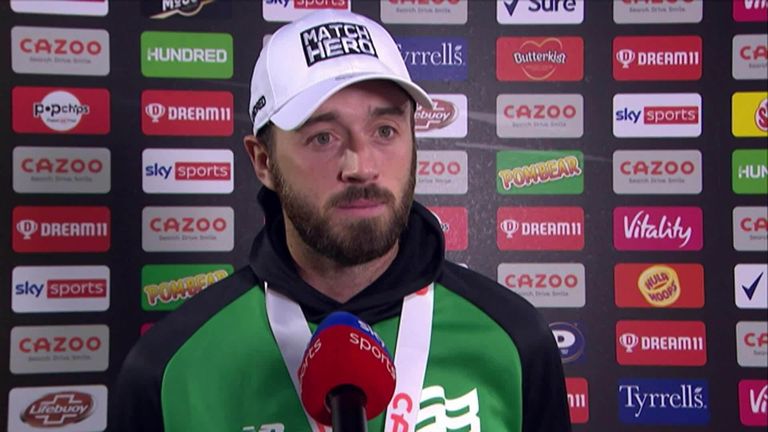 Moeen Ali, Birmingham Phoenix: "It was a very good game. I thought we pulled ourselves back into the game twice, with the bat and the ball. We lost three wickets quickly but Miles [Hammond] and [Liam] Livingstone played extremely well to get us to a very good score.

"We had a decent start with the ball, the bowlers were going nicely and got us some wickets, and in the end probably we should have won the game. We need to get used to being in that situation and hopefully next time we win it."

We've got another 'Super Saturday' for you, with as many as four Hundred matches to be played over the course of the day!

Welsh Fire and Manchester Originals kick things off in Cardiff, with their women's game - both looking to register their first wins of the comp - underway from 10.30am on Sky Sports The Hundred, before the men follow on from 2pm.

Meanwhile, up in Leeds, Northern Superchargers and Oval Invincibles battle it out at Headingley. A win for either women's side could see them leapfrog the Brave to the top of the table - watch from 2pm on Sky Sports Mix - while the men round off proceedings from 5.30pm back on Sky Sports The Hundred.

You can also follow along via our live streams available on the Sky Sports Cricket YouTube channel.