Vitality Blast Finals Day will be an all-Southern affair, as Kent, Sussex, Hampshire and Somerset battle it out for the coveted title at Edgbaston; watch all the action live on Sky Sports Cricket on Saturday, with coverage getting underway from 10.30am 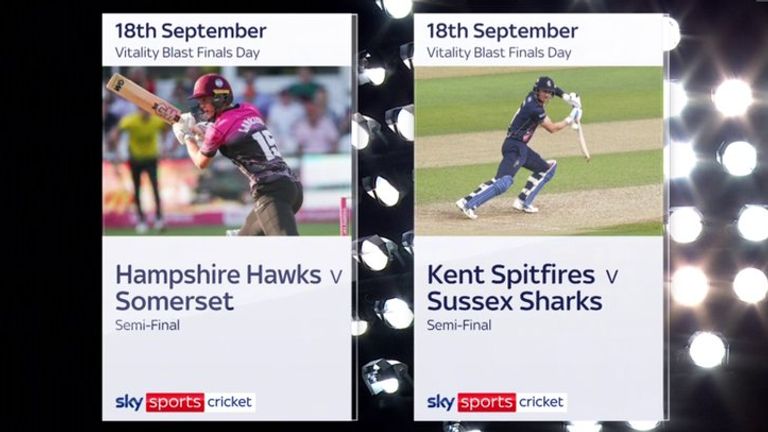 For the first time in the tournament's history, Vitality Blast Finals Day will be an all-South Group affair after Sussex, Hampshire, Somerset and Kent saw off their North Group counterparts to book their places in this year's showpiece.

All four semi-finalists have lifted the title since the Blast's inception in 2003, but now another historic chapter awaits at Edgbaston…

Hampshire were rooted to the bottom of the South Group at the halfway stage, but a run of five consecutive victories saw them sneak into the top four via net run-rate, after they chased down 187 in just 13 overs to stun Glamorgan.

Their remarkable brinkmanship continued in their quarter-final clash against defending champions Nottinghamshire Outlaws, who suffered an astonishing collapse to succumb by two runs in a low-scoring thriller at Trent Bridge.

The Hawks certainly have momentum on their side, and their hopes may rest on their explosive top-order trio of James Vince, D'Arcy Short and Joe Weatherley.

Seamers Scott Currie and Brad Wheal have snared 33 wickets between them, and England spinners Mason Crane and Liam Dawson will certainly have a pivotal role to play.

Vince has already captained Southern Brave to glory in the inaugural Hundred, and now he is bidding to complete a limited-overs double at Edgbaston.

It's been a summer to remember for the Hawks skipper. He struck his maiden international century against Pakistan after earning an unexpected recall to the ODI side, and he's been in prolific form across all formats.

The 30-year-old has been included as a reserve in next month's T20 World Cup squad, and he can serve another timely reminder to the England hierarchy by guiding his side to a third Blast triumph.

Somerset have an abundance of talent emerging through the ranks; despite his indifferent form, Tom Banton is a match-winner, plus Will Smeed, Tom Lammonby and Lewis Goldsworthy have played starring roles across the competition.

The 2005 champions - who defeated Lancashire in the quarter-finals - also possess no shortage of experience, with Lewis Gregory, James Hildreth, Tom Abell and Roelof van der Merwe in their ranks. 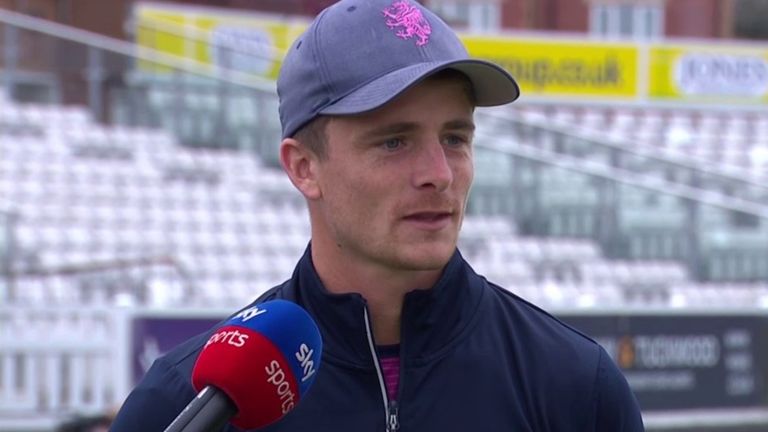 Somerset captain Tom Abell is confident his side can triumph at Vitality Blast Finals Day at Edgbaston on Saturday.

They have a multitude of batting options at their disposal, although they will be without New Zealand's Devon Conway, who registered four half-centuries in his eight Blast outings, compiling 309 runs at a whopping 61.80.

South African seamer Marchant de Lange has been their premier paceman with 17 wickets, while Gregory and England star Craig Overton claimed 12 wickets apiece, but Van der Merwe's control and guile could hold the key with the ball.

Player to watch - Will Smeed

Having only signed his first professional contract with Somerset last summer, Smeed is now touted as one of the country's most exciting prospects after enjoying a brilliant breakthrough campaign.

The 19-year-old is Somerset's leading run-scorer in the Blast; amassing 327 runs in 11 innings, and he was a revelation for Birmingham Phoenix in the Hundred, becoming the youngest male player to feature in the tournament.

The talented teenager performs with a refreshing exuberance, and his experience of the Edgbaston conditions could prove invaluable. He's enjoyed a dream summer, but will it have the fairytale ending?

The Spitfires topped the South Group table with nine wins from their 14 matches, and they breezed through to Finals Day with a comprehensive quarter-final victory over Birmingham Bears.

The formidable pace trio of Matt Milnes, Freddie Klaassen and Adam Milne have been integral to the Spitfires' success, although Milne's IPL commitments have ruled him out of Saturday's showpiece.

However, Kent's top-order have displayed remarkable consistency throughout the competition, with Daniel Bell-Drummond, Zak Crawley and Jordan Cox all surpassing the 300-run mark.

Milnes has been one of the emerging stars across all formats this summer, and in the absence of Adam Milne, he will be looking to spearhead the Spitfires' attack on Finals Day.

The 27-year-old goes into the season's finale full of confidence, after posting career-best figures of 6-53 in their recent County Championship win over Leicestershire.

Milnes also registered figures of 4-24 in their T20 quarter-final success over Birmingham last month, and as Kent's leading wicket-taker (18) in the competition, he'll be hoping to inspire the Canterbury outfit to a first T20 title since 2007.

The Sharks' side features a blend of youth and experience, with a number of promising youngsters playing under the stewardship of former England veteran Luke Wright, who has scored 360 runs at 45 this term.

Wright, Phil Salt, Ravi Bopara and Delray Rawlins form an incredibly destructive top-four for the 2018 runners-up, yet their reliance on the aforementioned quartet could expose a fragility in the middle-order if they lose early wickets.

Nevertheless, the key to their hopes could rest with their brilliant bowling attack, which includes the trio of Chris Jordan, Tymal Mills and George Garton, who inspired Southern Brave to victory in last month's Hundred.

They have been dealt a major blow with the absence of the indomitable Rashid Khan, yet with 17-year-old Archie Lenham, and Will Beer in the side, their frontline spin options can still compete with any attack at Finals Day. 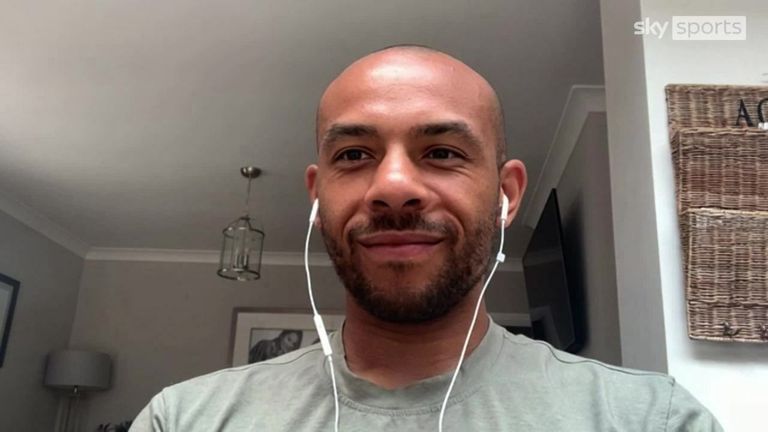 Sussex fast bowler Tymal Mills says he is 'counting down the days' to the T20 World Cup, after being included in England's 15-man preliminary squad

Tymal Mills' most recent international appearance came back in 2017, though his superb form for Sussex in the Blast and Southern Brave in the Hundred has earned him a sensational recall for the T20 World Cup.

The 29-year-old was diagnosed with a career-threatening congenital back condition in 2015, yet he's still flourished in the shorter format of the game - boasting the lowest economy rate of any bowler in the death overs during the Hundred.

He has all the attributes at his disposal - his ability to bowl in excess of 90mph is coupled with his deceptive slower deliveries, plus his devastating yorkers, and his variety is arguably his most lethal weapon.

Watch Vitality Blast Finals Day live on Sky Sports Cricket from 10.30am on Saturday as Somerset, Hampshire, Kent and Sussex vie for the title.

Vitality Blast Finals Day 2021 is supporting the players' charity: the Professional Cricketers' Trust. Saturday 18 September will see a day of fundraising and awareness for the Trust on one of the biggest days of the domestic calendar at Edgbaston. Visit bit.ly/DonateFinalsDay to find out more and donate.