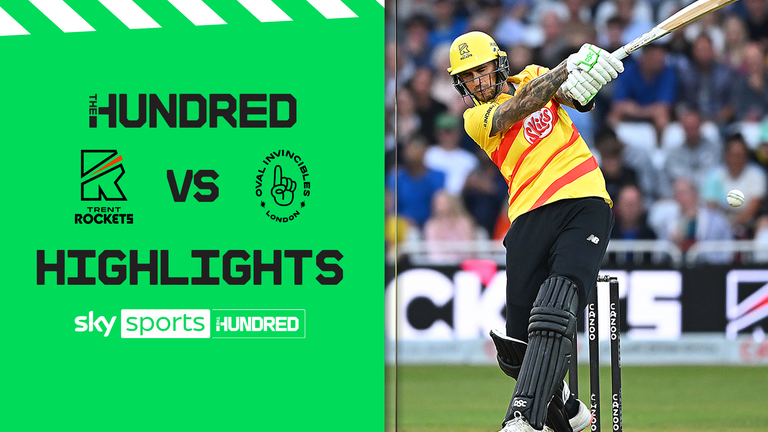 Trent Rockets made it four Hundred wins from five with a 25-run victory over Oval Invincibles, inspired by the work of Alex Hales in front of his home crowd at Trent Bridge.

Hales' stunning 59 off 29 balls included four sixes and six fours and gave the Rockets the platform to post a challenging 181 for four, backed up by leading run-scorer Dawid Malan's 38 off 29 and consolidated by skipper Lewis Gregory combining with Colin Munro to add 41 off the last 19 deliveries.

Despite Jordan Cox countering with an unbeaten 61 off 33, the Invincibles could not recover from losing their first three wickets for 42 in 35 balls, with South African left-arm wrist spinner Tabraiz Shamsi finding a notable degree of turn in taking two for 21.

After Rockets were put in, Malan had the six counter ticking from ball four but spent the next 40 largely admiring his team-mate as Hales delivered an extraordinary display of his clean hitting skills. 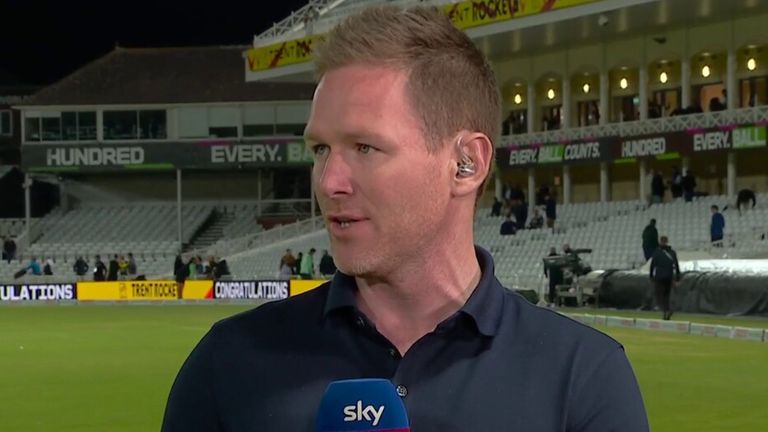 Hales, who survived an lbw review first ball, took a particular liking to Sam Curran, plundering three maximums off the left-armer, whom he hammered 20 runs off in one set of five. He had gone past 10,000 career short-format runs in the previous set and looked unstoppable.

His fourth six - off Sydney Thunder team-mate Mohammad Hasnain - sailed over the roof of the Fox Road stand and into the Nottingham night as his fifty came up off just 22 balls.

But after he had gone for 59, picking out the fielder on the midwicket boundary as Hasnain got his revenge, the Rockets lost some momentum and it needed Gregory and Munro's enterprise at the death to set the Invincibles a testing chase.

Phoebe Graham's The Hundred blog I 'Still anyone's to win'

We're heading into week two of the women's Hundred, so who better to reflect on what's happened than Manchester Originals' Phoebe Graham.

In between, Malan's knock had ended when Jason Roy grabbed a very low catch in the covers that needed an umpire review to confirm, Tom Kohler-Cadmore miscued to point, and Daniel Sams flicked one straight to deep square-leg.

The test facing the visitors soon became bigger still. Will Jacks was fresh from his brilliant unbeaten 108 last time out but Sam Cook had his number on this occasion, denied his wicket on an lbw review in his first set and watching him survive a top-edged pull before bowling him with a perfect yorker.

Roy at least avoided another duck but on 20 from 17 ran into a ripper from Shamsi that knocked back his leg stump. Shamsi had Sam Billings leg-before with one that fizzed through three balls later.

Curran built himself a start but perished for 27, getting away with a steepler that Tom Moores inexplicably spilled only for the wicketkeeper to redeem himself next ball with a stumping that won instant forgiveness from bowler Samit Patel.

It was not the best of nights in the field for the Rockets, with Cox shelled at short third on 32 and Sunil Narine on 16 by Moores - a difficult one this time - in the same Luke Wood over.

But with 66 needed from 20 balls despite Narine launching a free-hit over the rope at wide long-on, the winning line looked too far away for the Invincibles, despite Cox hitting three sixes.

Nasser Hussain discussed Hales' performance: "I try and pick people on their ability as a cricketer really. He did the crime, he served his time... forgive, move on. 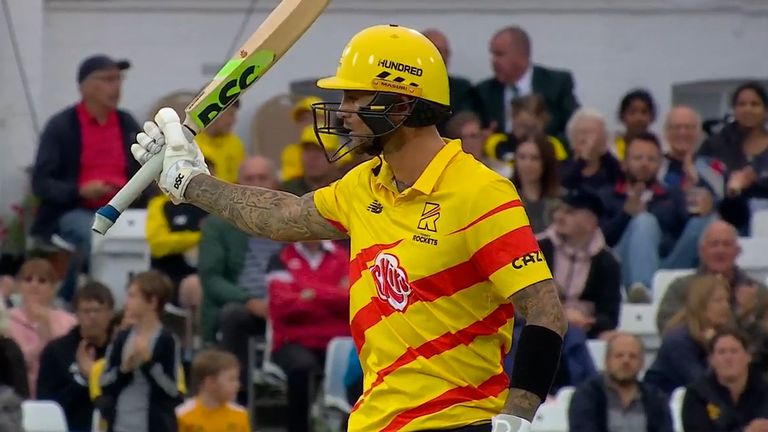 "He gets in that long line of players now. There's no Morgan, Stokes in 50-over cricket has gone so there are a couple of opportunities. Obviously, at the top of the order but you do have Will Jacks, Jason Roy, Phil Salt, Will Smeed.

"But, you can't tell me from what we've seen from domestic franchises around the world... Alex Hales is a serious cricketer.

"Try and pick your best side, but they may know something else, that inner core of senior players may not want him."

Southern Brave are hosting Manchester Originals on Thursday. The women are up first from 3pm, with the men to follow from 6.30pm. Both games are live on Sky Sports Mix.

Watch every match from The Hundred this summer live on Sky Sports.