England are optimistic Mark Wood will be able to face India in semi-final despite fast bowler pulling up in training on Tuesday with general body stiffness; watch the game live on Sky Sports Cricket on Thursday (7am build-up ahead of an 8am start)

Mark Wood has emerged as an injury concern two days out from England's T20 World Cup semi-final against India after withdrawing from training in Adelaide.

Fast bowler Wood, 32, appeared to pull up during a gentle jog on the Adelaide Oval on Tuesday and took no further part in the optional practice, seemingly a precautionary measure as England confirmed he was suffering from general body stiffness.

Wood has regularly topped 90mph since returning from an elbow injury that kept him out for most of the summer, with the paceman bagging nine wickets in four matches so far in this World Cup.

Tymal Mills would seem the most like-for-like replacement if Wood misses the game against India, with the Sussex left-armer also able to bowl at extreme pace.

The concern over Wood is another potential headache England could do without as they are yet to make a call on Dawid Malan, who tweaked his left groin while fielding in last Saturday's win over Sri Lanka.

The left-hander was said to be quietly optimistic of being involved against India but England will be reluctant to take any risks given the enormous magnitude of what is at stake.

While he walked round the outfield before briefly jogging on Tuesday, Phil Salt, who would likely come into the side if Malan was unavailable, seemed to have an extended catching session on the boundary.

Rohit set to be fit after scare; game to be played on used pitch

India were given a scare of their own as captain Rohit Sharma was struck on the wrist while batting in the nets and required treatment, although he was soon back in training and is not thought to be a doubt.

England, meanwhile, discovered on Tuesday they will be playing on the same pitch that staged the New Zealand-Ireland and Australia-Afghanistan double-header last Friday.

A used surface has been something of an Achilles heel in the past but England have beaten New Zealand and Sri Lanka on such wickets and it is not thought to be a bone of contention.

The ICC does not have a rule about the use of fresh-only or used pitches for any match in an ICC event. Our requirement is for the best-possible playing surface for every match. It does not necessarily follow that a 'new' pitch will be better than one that may have been previously used.

Sky Sports Cricket's Michael Atherton said: "I commentated on the New Zealand vs Ireland game in Adelaide and it looked the best pitch I had seen in the tournament.

"It visually looked great and had a nice even covering of grass. That was five days ago and the groundsman will have had time to sprinkle it, roll it, so I fully expect it to be a good pitch."

Ben Stokes believes England will have to adjust to the unfamiliar ground dimensions at Adelaide, which are longer straight and shorter square.

He said: "We'll have to wait and see what the wicket does on Thursday, I guess. It's about assessing and adapting to whatever situation you have in front of you.

"But we've been playing on big, square boundaries and looking to try and get the batters to hit to them, whereas here we're probably going to have to look to change our tactics."

Stokes: We are a very hard team to beat 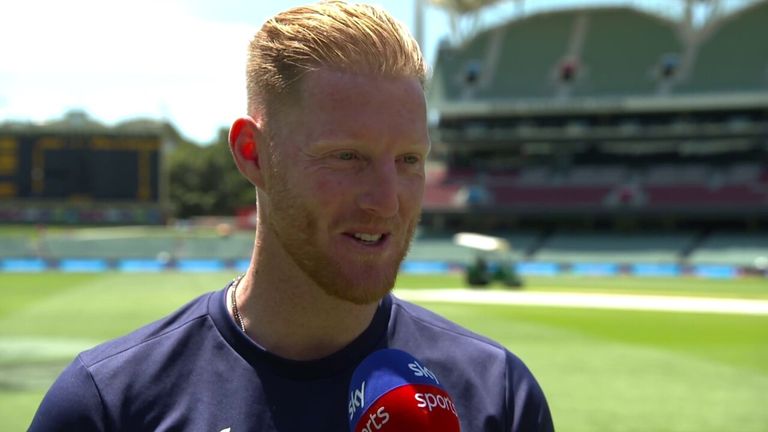 "The main thing is that we are here and playing in the semi-final of a World Cup.

"All the games that have gone before we can learn from and take them into this game but now we are at the crux of the tournament. It is about turning up and being better than the other team on the day.

"India are a very good team [but] we like to focus on ourselves more than on the opposition. We know if we play anywhere near to the capability we have got in the dressing room, we are a very hard team to beat."

Stokes' 42 not out off 36 balls helped England to victory over Sri Lanka on Saturday after a middle-order batting collapse.

The all-rounder added: "I would much rather be out there able to influence the game than be sat there and hoping that someone else can do it.

"I assessed pretty early that my role in that chase was to be there at the end because we all know how important it is having an in-batter in there when you are chasing down the last few overs.

"I think having been in situations like that before [helps]. If you feel like you are under pressure, you just look at the scoreboard and know it is one run a ball or a boundary away from taking it completely away from them."

Watch England's T20 World Cup semi-final against India live on Sky Sports Cricket on Thursday. An hour-long build-up begins at 7am ahead of an 8am start at Adelaide Oval.