"England are favourites for the World Cup, for me," says Nasser Hussain. "It's just about bottle and holding your nerve when you are favourites."

England's footballers will have to wait four and a half years for their next shot at the World Cup trophy, but it looks increasingly plausible their cricketing counterparts will be lifting their version at Lord's in 12 months' time.

Favourites for next summer's tournament on home soil before the just-concluded series against India, a 2-1 win over Virat Kohli's men - seen by most as their sternest challengers - has boosted their stock further, with Eoin Morgan's side now on a run of eight bilateral series victories in a row.

Since the debacle of the 2015 World Cup when last-minute team changes, thrashings at the hands of Australia, New Zealand and Sri Lanka and a loss to Bangladesh saw them dumped out in the group stage, England's white-ball rise has been spectacular.

England have won 48 of their 69 completed ODIs since their World Cup horror show, recording 13 series wins in 16 and losing only to India and South Africa away and a full-strength Australia at home.

They have racked up scores of 350 or higher 11 times and broken 400 thrice. They shattered the world-record ODI total when they blazed 444-3 against Pakistan in the summer of 2016 - and then did it again, at the same ground, when they marmalised Australia for 481-6 in June. But for a fairly timid end to their innings, they would have topped 500.

Each of their regular top seven has multiple ODI centuries - Joe Root now with a national record 13 after overtaking Marcus Trescothick's 12. Adil Rashid, a man with 10 first-class tons to his name, bats as low as 10. Alex Hales, a star of those world-record totals, is only first reserve.

On docile decks, when the only real currency is fours and sixes, England are dominant - yet they showed this summer that they are now more than flat-track supremoes and that the pressure of knockout games against quality opposition is one they are coming to terms with.

Those aforementioned ODI series defeats in South Africa and at home to Australia came courtesy of reverses in deciding matches, while they also fluffed their lines in the semi-finals of the Champions Trophy in 2017 when, presented with a slow, low pitch, they subsided to 211 all out against Pakistan. The 2016 World T20 final was another occasion when they couldn't quite get the job done.

Pressure was mounting, too, when an eight-wicket thrashing to India at Trent Bridge last Thursday, in which they were utterly bewildered by left-arm wrist-spinner Kuldeep Yadav, left England one down with two to play. A pseudo knockout scenario. But they responded.

Root's 113 and a blistering late burst of 50 from 31 balls from David Willey saw England up to 322 at Lord's, a total they easily defended.

Then, at Headingley, Adil Rashid's 3-49 - which included a stunning spinning delivery that bowled Kohli, much to the batsman's disbelief - and Willey's 3-40 limited India to 256-8, a total England easily surpassed, thanks to Root (100no) and Morgan (88no).

Sky Sports Cricket's Nasser Hussain has noted England's progression: "They used to look like a side that could bully opposition on a flat pitch and get 400. But, Cardiff, dry game, Champions Trophy, they didn't know what a good score was, they weren't very smart.

"Are they a side that can judge a surface and work out what a good score is? They did that at Lord's and they did that at Headingley and why did they do it? Because they have a high-class No 3 who averages over 50. With all the lads that smash it around, you still need that. That is Root. 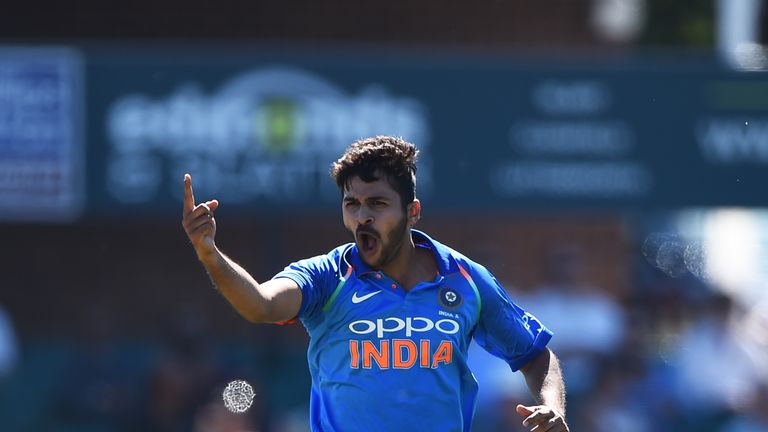 They are obviously favourites because it's their home conditions. England know better how to play cricket here, so other teams have a big challenge to play here.

"They have answered a lot of questions. England are favourites [for the World Cup] for me. It's just about bottle and holding your nerve when you are favourites."

India's three alterations, including the bizarre omission of KL Rahul, in the final ODI showed they are still hunting for their best side. England, in contrast, are a settled unit. You could probably name at least nine of the XI that, fitness permitting, will line up against South Africa in the World Cup opener at the Oval next May.

It'll be two from three of Jonny Bairstow, Jason Roy and Hales in the opening spots, with James Vince, Sam Billings, Dawid Malan and, possibly as an outside bet, Joe Denly fighting for back-up batting berths. Root, captain Morgan, Ben Stokes and Jos Buttler seem nailed on as 3, 4, 5 and 6.

Spin twins Moeen Ali and Adil Rashid will provide the twirl, with Willey, Liam Plunkett, Mark Wood and Chris Woakes - who has missed this summer's white-ball games through injury - the contenders for the pace positions.

England will require another standby seamer - Tom Curran, who displayed his myriad variations in the ODI series win in Australia over the winter, will feel confident of pipping brother Sam, Jake Ball and Craig Overton - while they'd like another spinner to push on should Rashid suffer an untimely injury. Mason Crane could be that man once he is over a stress fracture.

An injury to Rashid would be a crushing blow for England, with the Yorkshireman having had a summer to cherish, perhaps vindicating his decision to abandon red-ball cricket, temporarily at least, and focus on the white. The leggie is now the leading ODI wicket-taker among England spinners with 113 in 73 matches, having overtaken Graeme Swann (104).

That magical ball to banish Kohli was the obvious highlight but Rashid, who snared 12 scalps at 21.50 against Australia in five ODIs and six at 24.83 in three games against India, will be pleased with the control he found while remaining a wicket-taking threat. There must be at least some in the England hierarchy wishing they could call upon him for the Test series.

"I would lock him in a room, shine a light in his eyes, strap him to the chair and tell him: 'you will be playing red-ball cricket'," David Lloyd said of Rashid. "He has been the best spinner of all of them."

Willey, too, has enjoyed a fine few months - no longer just a new-ball specialist, the left-armer has become effective at the death with his wide yorkers, while he has made more than one contribution with the bat, with an unbeaten 35 in the opening game of the whitewash over Australia seeing England negotiate a potentially tricky run chase. All of a sudden, Woakes is not a shoo-in.

So with belligerent batsmen and the class of Root, the bowling attack developing and vital games being won, there is plenty of cause for optimism for England.

Playing spin remains a slight concern, despite Root and co getting to grips with Kuldeep more and more with every game, though that can be worked on during the winter tour to Sri Lanka, in which five ODIs will be played.

The Football World Cup isn't coming home but the cricket one just might be.

Watch the 2019 ICC Cricket World Cup live on Sky Sports next summer - England will kick off the tournament against South Africa at the Oval on Thursday, May 30.