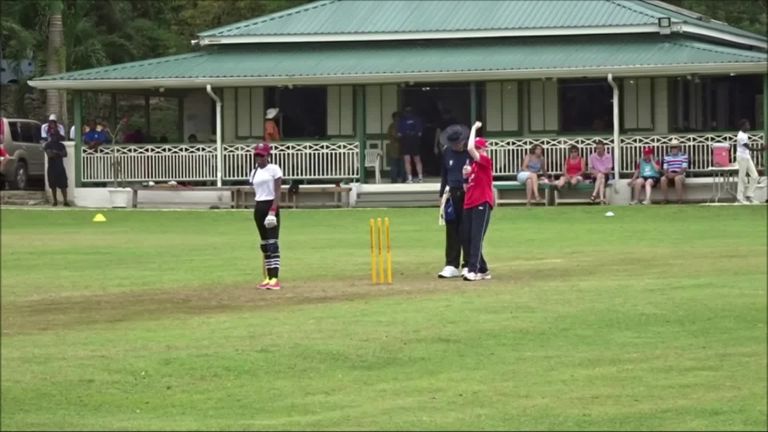 The UK took a squad of 18 players ranging in ages from 14 to 73 accompanied by a support team consisting of coaches, scorers and a medic.

"It was a very successful tour from our point of view. We came home with lots of smiling faces from the girls and the coaches and we learnt a lot," said the team's captain, Lois Turner.

"We were quite comfortable in all of our games, it was clear we were up to a different level compared to the West Indies and our knowledge of the game was definitely useful for us.

"Every single player had an individual strength that we were able to use in different games."

The team stayed in Bridgetown and the games were played at various grounds in the local area.

After winning their first three games, the UK lost the first of two matches played in the evening under floodlights, which Turner explained made it more difficult for some of the partially-sighted players to see.

The 20-year-old from Stoke-on-Trent added: "We struggled in one game and that was mainly because it was a day-night game.

Despite the setback, the UK skipper revealed the team bounced back to win the final game under floodlights.

The team doesn't currently receive any funding from the ECB and had to raise £40,000 for their tour in the Caribbean.

Turner revealed: "From my point of view it's a bit frustrating the ECB haven't already been involved because these girls have the ability to progress and I can't see why we don't already have that support from the ECB.

"Hopefully now it's obvious we're keen and we're a squad that can achieve, they will be willing to back us a bit more and offer more support."

The players fundraised using various methods including bucket collections at train stations, skydives, holding quiz and karaoke nights, raffles and paying £300 each to go on the tour.

The team were also sponsored by Manpower and Serious Cricket.

Domestic blind cricket in the UK is played by County sides consisting of men and women.

The game is run by Blind Cricket England and Wales (BCEW) and has grown in the last ten years from one league of eight teams to four leagues comprising of 23 teams.

The number of women playing the game has also increased in the last 10 years, with the UK playing the first international women's blind cricket series against Nepal in 2014 which they lost 3-0.

Turner highlighted the importance of the tour against the West Indies on the growth of the women's game and her hopes for the future of the women's sport.

"When I came back I looked on Twitter and saw Pakistan are going to Nepal for a five game series, so lots of other countries have seen we've gone and it' encouraged other countries to start developing their women's teams," she said.